It’s almost Valentine’s Day and here I am, hunkered down at Starbucks, writing my blog and wondering why they chose a bleak month like February to celebrate Valentine’s Day. I concluded that in the days of old, there was little to do during the short winter days, so why not celebrate love, cuddle up with your Valentine, and enjoy? Imagine my surprise when, after a few minutes of research, I discovered I was wrong. Here’s what I found out about Valentine’s Day… 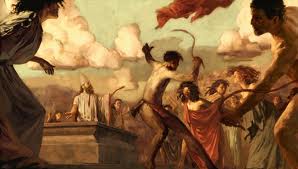 Valentine’s Day began as a Pagan fertility festival called Lupercalia (February 15th), which involved nudity and whipping (and no, I’m not talking about whipped cream). During the festival, the boys whipped the girls’ bottoms to stimulate fertility— though I’m not sure whether it was the boy’s fertility or the girl’s they were aiming to stimulate.

In 197 AD a Christian known as Valentine of Terni was martyred and beheaded on February 14th by a Roman Prefect with the oxymoronic name of Placid Furius. This was the first Valentine reference I came across in my research that corresponded to the date of February 14th, but he was not the last. It happened again in 289 AD. This Valentine of Rome was jailed for aiding prisoners. While in jail, he converted his jailer and healed the jailer’s blind daughter’s sight. He supposedly fell in love with the girl and sent her notes signed “From your Valentine” which was, I suppose, the first Valentine’s Day card. Ironically, he is said to have died on February 14th. I believe it was under Pope Claudius that he became a Saint. However, it wasn’t until 496 AD, that Pope Gelasius made a bid for peace with the still popular pagans and their festival of Lupercalia, by declaring February 14th to be St. Valentine’s Day—a Christian feast day.

The first reference of Valentine’s Day that was linked to romantic love wasn’t until 1382 in Geoffrey Chaucer’s Parliament of Fowls. It was written to celebrate the engagement of England’s Richard II to Anne of Bohemia. Chaucer wrote “For this was on St. Valentine’s Day/When every fowl cometh there to choose his mate” but then since he was talking about mating birds, which doesn’t happen in February, this probably took place on May 2nd, the Saint’s Day in the Liturgical calendar. Still, the link between Valentine’s Day and romantic love was formed. Further cementing the correlation, in 1601, St. Valentine’s Day was mentioned by none other than Shakespeare in Ophelia’s lament in Hamlet “Tomorrow is St. Valentine’s Day,/All in the morning betime,/And I a maid at your window,/To be your Valentine.”

So, you might ask where and when the tradition of Valentine’s Cards came into play. That one, as well as the whole romantic love connection can be blamed or attributed (depending on your point of view) to the English. In the mid 18th century, passing love-notes became popular in England. They were made of lace and paper and The Young Man’s Valentine Writer was published. By the early 19th century, love-notes became so popular, factories began to mass produce them.

In 1913, Hallmark Cards produced their first Valentine in the US. Since then, commercialization of the holiday continued and grew to include chocolate, flowers, cards, and diamonds. A few of my favorite things. Obviously, most men don’t take my husband’s view on the holiday. Last year, it’s estimated that Valentine’s Day sales generated $14.7 billion dollars in retail sales in the US alone—none of which was from my Domestic God. I never said the man was perfect, just close. He was nice enough to go out in the snow and take pictures for me, so although he’s not one for cards or gifts, he’s the most giving man I know every other day of the year. Still, a little chocolate and a diamond or two would be appreciated.

May your Valentine’s Day be a memorable. I’m looking forward to cuddling up with my husband and kids and enjoying some quality time together. I’ve decided that I’m glad Valentine’s Day is in February. Can you think of a better way to brighten up an otherwise bleak and depressing month?

Tell us your Valentine’s Day plans, and one commenter will win the signed Grace Burrowes book of his or her choice. Everybody who comments is entered to win the NOOK (winner announced Feb 18).

45 comments on “The First Valentine’s Day…. by Robin Kaye”