True confession: I’m in love with a particular part of the actor Richard Armitage, and it isn’t his nose. Nope, Nope, Nope. It’s not his King of the Dwarfs schtick either, though I’m sure that’s impressive, and it’s not his rendition of John Thornton from “North and 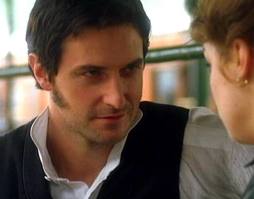 South,” though I can recite many of his lines verbatim.

I’m in love with his voice. Those audio books with him reading Georgette Heyer? Scrumptious, virtuosic, amazing… I expect some of his skill in this regard is because once upon a time, he pursued music professionally, playing cello and flute. Music informs how I write—I hear my characters’ voices—I can’t help but think it informs how Mr. Armitage goes about his work, too.

When I catch wind that somebody is interviewing Richard Armitage, I usually click the link, in part because I want to hear his “real” voice. The Everyman quality of his interview voice always takes me aback, but then, “Mary Had a Little Lamb” can be performed on a Bosendorfer concert grand piano or a kazoo.

The most recent interview I’ve seen of him was on the day of “The Hobbit,’s” premier in Wellington, New Zealand. The questions asked included a query about how it felt to wrap up shooting after a year and a half, working with a cast that had grown quite close. After that long, I expected the cast and crew might be mighty ready to get home, wherever home is, and move on to a world other than Tolkien’s. 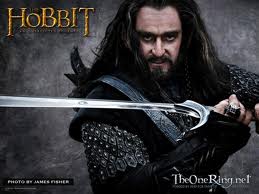 Not so. Mr. Armitage said he’d been “choked to leave” after the final wrap, and talked about how hard it was going to be to “shake off the character.” He speculated that part of the role would live on inside him for a long time.

Maybe if I’d been Thorin Oakenshield (or Mrs. Oakenshield?), I might be happy to have some of my roles live on inside me for the rest of my life, but there are other roles I wish I were better at ditching. When I get home on Thursday, I’m usually still running lines from my closing arguments at court (which by the time I can’t fall asleep Thursday night, are finally brilliant), drafting motions for reconsideration in all the cases I lost that day, and reconstructing the cross examinations I fumbled.

With all that noise in my head, it’s hard to turn my focus to Regency England or Victorian Scotland, and I really, really resent the interference.

I want to ask Richard Armitage how he does it. How does he leave behind the reality and people that claimed his focus for months—not merely for a day at the courthouse—and re-fashion “real life” that includes a place for old Thorin from time to time, but doesn’t cater exclusively to Thorin’s continued existence?

Maybe this is part of the reason so many people become depressed following retirement: The role they’ve fashioned wants to live on, and can’t, and road maps for shaking off roles are few and far between in our culture.

Next Thursday, I’m going to make sure I have a version of “The Convenient Marriage” read by Richard Armitage with me in the truck, and when I drive home from the 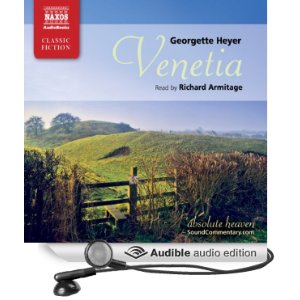 courthouse, I’ll be hearing Lord Rule’s purring tones, and Horatia’s stammer, rather than my own feeble bleating in the halls of justice.

How do you shed your roles, or at least transition between them? To one commenter, I’ll send a copy of Richard Armitage reading Georgette Heyer’s “Venetia.”