Not very long after I began practicing law, I realized I was in the business of managing failed relationships. When a marriage fails, when a business partnership fails, when a parent-child relationship fails, or even when the social contract itself fails (as when somebody commits a crime), into the lawyer’s office, we do go. This is a good thing, from some perspectives. 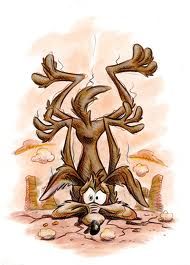 The disintegration of a relationship can leave us emotional roadkill, some vital part of our identity in tatters. Having a professional involved who excels at rules and procedure can mean the divorce, foster care case, criminal trial, or what have you, at least moves forward, however painfully. In the alternative, turning to a lawyer can leave us feeling disempowered by some expensive, fast talking, shaming pain the behonkis who has more diplomas than chambers to his or her heart.

In defense of the lawyers, we are not warned in law school that we’ll be dealing in failure and grief. In law school we learn about exceptions to the rule that says hearsay shouldn’t be taken into evidence. We learn about offer, acceptance, consideration and capacity—oh, my! Many lawyers can do an excellent job for their clients and have it be mostly about the legalities.

No wonder, a career lawyering sees my nose buried in a romance novel nearly every day. 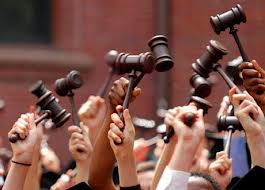 And yet lawyering has been good preparation for writing romance novels. First, I see many, many “miserable ever afters,” and have a chance to study what goes into them. Some of these MEAs befall the clients, but more than a few have happened to judges and other lawyers. Understanding how we sabotage ourselves yields good insights for when a fictional character is going to make a last, desperate grab for the brass ring of happiness.

Second, having been a lawyer, I can think analytically, or maybe a better word is tactically. I doubt analytical thinking is my natural mode, but rather, an acquired skill resulting from having five older siblings in a family that valued academics. I had to learn to sound smart, whether I had the groceries or not (and when it comes to math, friends, I do NOT).

Third, I understand that destruction can be a good thing. Whether it’s cutting a child’s ties with a birth family intent on that child’s exploitation, or tossing aside a manuscript nobody was very impressed with, there’s some truth to the adage, “Weak people give up and stay, strong people give up and move on.” 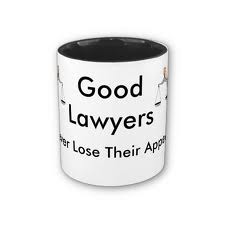 The day is coming when I’ll move on from the courtroom, and maybe from the practice of law altogether. When that day arrives, I will be grateful for years in a profession that provided well for me and mine, and taught me much I can use elsewhere in my life.

Think of a time when you moved on, when you changed jobs, towns, or churches, or maybe when you let a relationship go.

What wisdom did you take from the experience, and how did that lesson serve you as you moved on with your life?

To one commenter, I’ll give a DVD of “The Princess Bride.” (Buttercup Edition)

24 comments on “Legally Mine”