My mom is 89 years old and mostly in possession of her wits, but she neither hears nor sees well, and her memory is getting a bit dodgy. Dad, at 92, has good and bad days. He can walk short distances with a cane, sees well, hears well, and knows the songs of most birds in the eastern United States but naps frequently and may not recall at lunch what I discussed with him at breakfast. 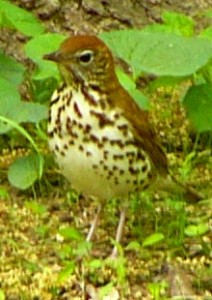 What we discussed at breakfast does not matter as much as those song birds. My brother’s cell phone has the wood thrush as its ring tone. Dad got it in one, and hearing that song, I’m sure he was transported back to birding walks with his Uncle John, to evening strolls with my mother when they lived in Pennsylvania, and to quiet mornings as a boy in East Aurora.

Memories can terrify so powerfully, they obliterate reason, but I hope, increasingly as we approach the end of life, memory becomes our best comfort, and eventually, our reality.

I have many, many wonderful memories of Easter, in particular. 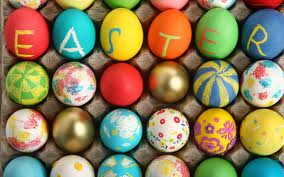 First, on Saturday we’d die eggs, at least two dozen. Why so many, you ask? Not because we wanted egg salad sandwiches in our lunches for the next week, but because with seven children, two dozen eggs meant we’d each find at least several in the household Easter Egg hunt. From year to year, some hiding places remained the same, but others… yes, there was the occasional orphan egg, founds days later, and taken straight outside to the garbage cans no matter how badly I wanted to know exactly what a rotten egg smelled like. 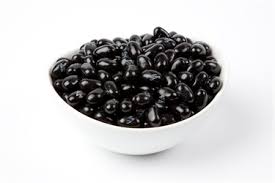 There was also a dish of jelly beans. In good years, they were the spicy kind, with clove, cinnamon, licorice (my fave), and peppermint, but more often, they were the really sweet, fruity kind that is mostly useful for wrecking teeth and pitching at siblings.

There were Easter baskets stored in the Christmas closet, and a bit mildewy as a result, but we each had our own, specific, don’t-you-dare-touch-mine basket, and mine was one of the largest. 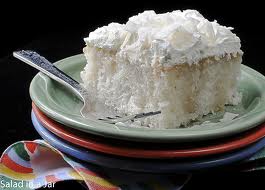 Finally, there was Easter dinner, which might have involved ham, ranch dressing mashed potatoes, and green beans almondine. I forget the meal (please don’t tell Mom), but I recall in scrumptious detail the coconut cream cake made with whipped cream and Jell-O. Mom ONLY made this cake on Easter and there was never a single piece left over.

Not one. Be nice to me, because I have the recipe.

When I’m old(er) and my memory is a bit (more) dodgy, when I’m reduced to teetering short distances with a cane, don’t worry about me too much. Aided by my memory, a part of me will be skipping through the house, hunting Easter eggs, picking out all the black jelly beans, and savoring a piece of Mom’s Easter cake.

How about you? What memories will comfort you and make you smile? What memories are you making for your children to bring them comfort and cheer when you no longer can?

To one commenter, I’ll send a signed copy of “Darius,” due to hit the shelves on Tuesday!

39 comments on “Once Upon a Many Years From Now…”