Time to ‘fess up: For the past two weeks, I’ve been traveling in Scotland. In deference to everybody who wasn’t with me, I ought to say the weather was awful, the scenery dreary, and not a kilt to be seen. Alas, the weather was wonderful, the sights were marvelous, and the kilts very much in evidence. 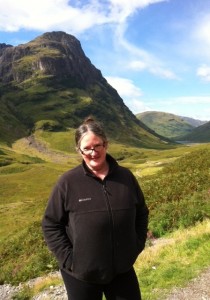 At Glencoe, enduring the awful weather and the dreary scenery…

I had the time of my life, and I’m indebted to a reader–waves at Carol who plays the harps–for suggesting I sign up for a Beltane Tours trip around Scotland. The tours are hosted by Jim and Susie Malcolm, a Scottish couple of traditional music persuasion. I’m not what I’d call enthusiastic about traditional music (folk music), but it’s accessible stuff (think Peter, Paul and Mary), so it can be enjoyed by anybody–including me.

We sang our way around Scotland, had a wee dram now and then, listened to terrific live performances, and saw more sights than ought to fit into any two weeks. Some highlights:

1) Getting a hug VERY FIRST THING from Jim, before he even knew who I was (or whether I was for sure with the tour?). 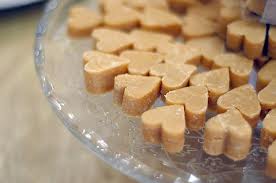 Scottish Tablet (and yes, it comes in whiskey flavor)

3) Hearing Susie sing “Loch Necessarily So” as we toodled along Loch Ness.

4) Scenery out every window such as you usually only see on calendars. EVERY window.

5) Tablet. This is like fudge dipped in frosting with an extra helping of sugar. If those old boys who fought for independence at Culloden had had tablet in their rations, the Government troops would never have prevailed.

6) Learning about whiskey. Jim is a knowledgeable and enthusiastic ambassador for this most famous Scottish export, and you betcha the heroes in my books will appreciate the education I got. For me, the wee dram of the day was, of course, purely an exercise in selfless devotion to literary accuracy. (Whiskey goes well with tablet, though–I’ll admit that much.) 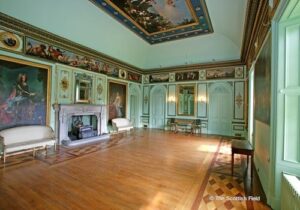 7) The other people on the tour were uniformly good company. Not a whiner in the bunch–maybe the whiskey helped with morale? Maybe singing and dancing in the music room at Murthly Castle and being piped home by the laird of the castle helped?

8) Learning Scottish history. The tale is not happy, but it is ultimately triumphant. Scotland today is poised to soar. The country has access to tremendous stores of North Sea oil, and yet has 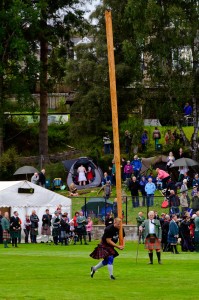 9) Watching the town of Braemar literally close up shop to see the Queen drive by. We went to the Royal Highland Games, where the big guys in kilts toss the telephone poles around. Her Royal Majesty, Prince Phillip, and Prince Charles also dropped in. The shopkeepers all slapped a “back in five minutes” on their doors, left their wares completely unattended (on the sidewalks, even), and waved at the Sovereign as she tooled past. Can you imagine your main street being THAT safe? 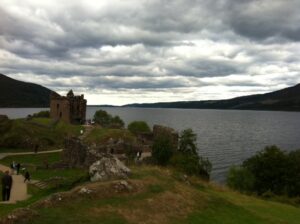 10) Knowing that many seeds were planted in my imagination. These seeds will germinate and blossom for years to come. Right now, my first priority is figuring out how to get Jim’s description of a Highland charge–“running hairy-ballocks naked down the hill”–into some piece of dialogue….

I’ll be posting more about this trip, I’m sure. Have you ever had a dream vacation? What would your dream vacation be? C’mon–your DREAM vacation. To one commenter, I’ll send some Scottish tablet.

62 comments on “Ten Things to Love About Traveling in Scotland….”