Jane Ashford discovered Georgette Heyer’s novels while in junior high school, and became entranced with the glittering world of Regency England. Jane’s historical romances have been published in England, Sweden, Italy, Denmark, France, Russia, Latvia, Spain, and the United State. She joins us today to celebrate the upcoming release of The Bride Insists, the second in her Regency Bride series. 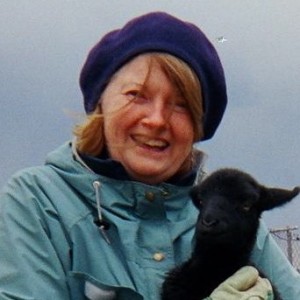 Grace:  What’s the biggest lesson you’ve learned in your years as a published author that applies to the rest of life?

Jane: When you find what you love to do, you mustn’t let anything stop you. If you write, you’re going to get rejections. There will be people who don’t like your work (and say so!), as well as those who do. If you really want to be a writer, you have to pick yourself up after a setback and keep trying. I think that goes for life as well.

Grace: What made you start writing? 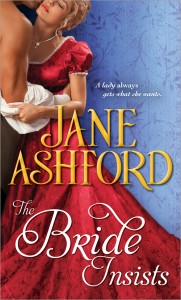 Jane: I’ve loved storytelling for as long as I can remember. As a child I made up stories about the passing scene on long car rides. Writing is what makes me happy.

Grace: If readers could only learn three things about you, what would you want them to know?

Jane: If you see me at a conference, I’m hoping you’ll come on over and say hello! I like research and care about the “historical” in historical romance. I really appreciate people who take the time to give their reactions to a book.

Grace: What do you like to read? Do you have keeper authors, and if so, who are they? 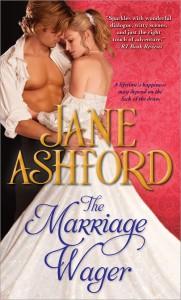 Jane: I read all kinds of genres – science fiction, mystery, mainstream and romance. When I re-read, though, I turn to writers whose characters I love and want to spend time with – Georgette Heyer, Lois McMaster Bujold, Charles De Lint, Jim Butcher. And I never get tired of Folly by Laurie King.

Grace: What’s the hardest part about writing for publication? The most fun? Any wish I’d known then what I know now’s?

Jane: You know what? I think the hardest part is titles. Sometimes it’s so difficult, finding the perfect title for a book. The most fun – hearing that readers have enjoyed a story I created. And I wish I’d known that you can just let first drafts be bad. I think it was Nora Roberts who said: You can fix anything but a blank page. 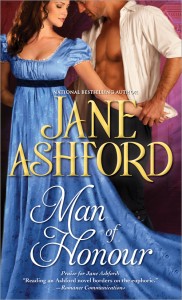 Grace: If you had to choose one of your titles for readers to start getting to know you, which one would it be and why?

Jane: You want me to choose one of my children? : ) Well, I try to learn and grow as a writer all the time, so I’ll say Once Again a Bride, my most recent book. Sneaking in another choice, I have a soft spot for the hero of The Marriage Wager.

Grace: What question would you like readers to answer to qualify for the giveaway or The Man of Honour, The Three Graces, The Marriage Wager AND a $50 Amazon gift card?

Jane: What do you love about historical romance?

Thanks for having me on the blog!

Three of Jane Ashford’s beloved backlist titles are now back in print! Look for Man of Honour, The Three Graces and The Marriage Wager in stores now!

Jane Ashford also has a BRAND NEW book coming out in March 2014:

When governess Clare Greenough learns she’s inherited a fortune, the good news comes with a catch: it will be held by her cousin until Clare can find a husband. To stave off ruin, Jamie Boleigh, the seventh Baron of Trehearth, agrees to marry Clare under the condition that she controls the money, a provision he hopes to overturn. Their passionate relationship becomes a battle of wills. When the cousin tricks Jamie into betraying his wife, he’ll have to prove the truth or lose her forever.

Find Jane Ashford on the web at www.janeashford.com and on Facebook.

To Preorder The Bride Insists: