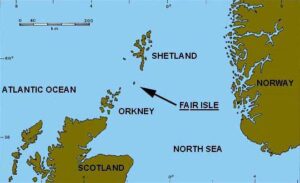 I write this from the Orkney Islands, at the mid-point of my latest tour of Scotland. The Orkneys are north of Scotland, and were claimed by Norway for nearly 600 years. They ended up in Scottish hands in (1472) when a Norse king couldn’t pay a cash dowry for his daughter’s marriage to a Scottish king. The Norse king decided to toss a few 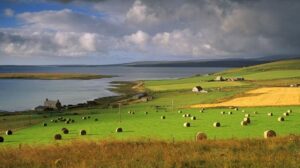 islands (like 70 or so) into the kitty instead. I suspect his descendants regret that now, because this place is beautiful and fascinating.

I’m a little travel-fried, so I’ll throw out some random observations. First, you’d expect a place this far north (north of Moscow) to be cold and 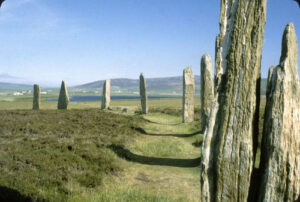 bleak. WRONG. The average low temperature here is about 40 F, the average high about 50 F, but it can get into the 70s and at this time of year, it never really gets pitch dark. Frosts are rare. The soil is abundantly fertile, and the largest industry is agriculture. Who’d-a thought?

Anybody with any sense, apparently. Orkney has been 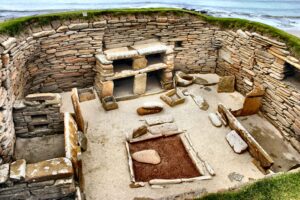 inhabited for at least 8000 years. Europe’s best preserved neolithic village, Skara Brae, is about 7000 years old, and we wouldn’t know it was lurking under the turf, except for a huge storm in 1850 that tore off a chunk of seashore and exposed some of the walls. The local laird went out walking the next morning, and had sense enough to know he was looking at a Big Archaeological Deal. 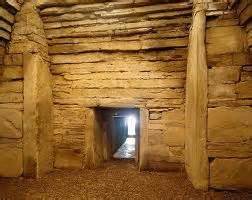 Second observation: Human nature doesn’t change. There’s a beautiful Stone Age passage grave called Maesehowe that the Norsemen stumbled into about a thousand years ago, apparently taking shelter from a blizzard there. Those old fellas got to carving graffiti into the stone, and what did they write? “I miss the fair widow Ingebur,” “I’m the best rune maker in the world,” and “I didn’t steal the treasure, Hakkon did.” Maybe there was some mead involved? 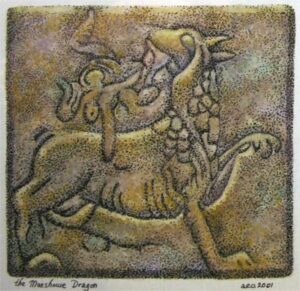 Third observation: The urge to create something beautiful is nothing new either. Those silly, bored Vikings also carved a little dragon into the stone too. The tool makers at Skara Brae decorated their stone and bone tools.

Fourth observation: Bureaucratic incompetence is nothing new. When the Victorians tried to excavate that prehistoric tomb, they dutifully collected the bit of human skull, horse bones, pottery and what not… and lost it all on some train or other. (Any mystery writers out there?) 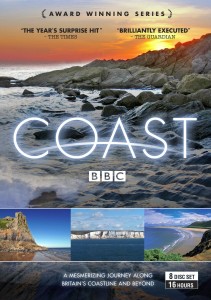 I could go on and on, but the theme is, across millenia, across oceans and cultures, we’re the same. If travel teaches me anything, it’s that we’re the same creature, with the same hopes, fears, and dreams. We want security, beauty, true love, and a few laughs (Hakkon did it!), and maybe the occasional flagon of mead.

In Scotland, I have a sense that the more I explore, the more I want to explore. Is there somewhere you’d like to explore, or go back to again and again?

To one commenter, I’ll send a copy of Neil Oliver’s “Coast,” an anthropological look all of coastal Britain, past and present.