In the past ninety days, I’ve lost two cats, a kitten, a dog, a large part of my lawyer-job.. and my mom. My grown-up brain knows that most pets have shorter lives than their owners, parents in their 90s probably aren’t going to be around another ten years, and lawyer jobs come and go. Of all these losses, my mom’s death is the one I could see coming the best, and it still wrecks me.

There is probably a gift in all this loss, especially in being told that the foster children in my county will soon be represented by somebody else.  For nearly 23 years, that job broke my heart–not only for the children and families, but also for the social workers, and even for the folks in the state office. They were usually barking at me for this or that undotted i or uncrossed t, but I also know the program office was harassed by clueless politicians and nincompoop audit requirements. Their jobs weren’t any easier than mine–and they had to wear office attire and punch a time clock every day. 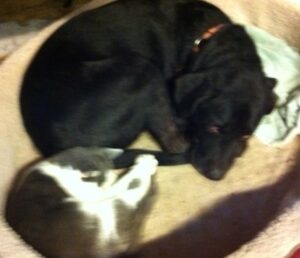 When I’m not grumping and grieving, I’m left with the hope that I’m facing opportunities behind the grief. Travel to Scotland is easier when I have only three animals instead of seven. To be gone for a month is much simpler when I don’t have to mother-may-I every trip with the program office, and know–just know in my bones–that at 2 am on some fine Scottish night, I’m going to get a call from a foster kid who’s run off, and my number was the only one still in her phone.

I’ll have more time to write if I’m not lawyering–lordy, will I!–and as my first editor put it, when I have a bad day as an author, no babies die.

Now there’s a heck of a perspective. 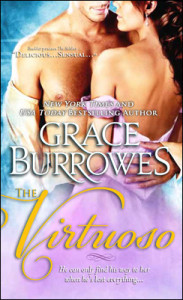 And yet, I want Sarge, Petey, Button, and Besom back. I want my mom to have a few more good years. I want to be the one to say when the lawyering is done… and I’m not getting what I want.

I might be getting what I need, though. We’ll see. I still have animal friends, including an elderly horse in Florida. He’d better watch out for stray alligators.

How do you cope with unexpected losses? I’ve done some big de-cluttering, I’m walking more, and I’ll see more of my family later this year–all of my family. Any do’s or don’t occur to you? I’m all ears, and giving away a signed copy of The Virtuoso, a story about a guy who lost the one thing that he thought made him special. (He was wrong.)

39 comments on “Freedom’s Just Another Word”