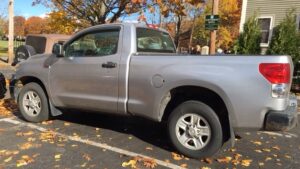 I drive a pick up truck.

I chose a Tundra because they have great crash test statistics, and I needed something that could pull a small horse trailer. More to the point, though, I like being an old lady who drives a truck. It’s me, and it’s not what small town lawyers or romance authors are supposed to drive. The truck connects me to when I was a horse girl, and gives me a certain confidence where winter weather is concerned. “Bring it,” I say to the snowy sky. “Trusty truck can handle it!” 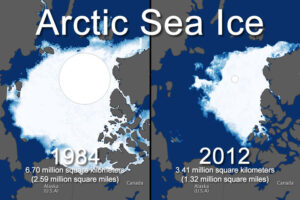 I was recently scrolling through my Facebook feed, though, and I came across the image at the right. We’ve lost a LOT of arctic ice. The next thought in my head was, “I’ve planned my last road trip in the truck.”

Pictures really do have the power to change our minds. If the recent political campaigns have proven one thing, it’s that a mind made up is nearly impossible to change. Facts won’t do it, threats won’t do it, logic won’t do it. Exit polls showed that most people had chosen which candidate to vote for in September, and nothing changed their minds. Not emails, not hot-mic videos, not debates. We go to the trouble to make a choice, and it’s as if our brains can’t find reverse, no matter how unfortunate that choice might be.

We sift all incoming data, seeing only that which supports our preferred option. Perception bias means we also contort data, even to the extent of mis-remembering it, to better justify our first choice. The more you rant at me about how dumb my choice is, the more tightly I cling to it, and close my mind. 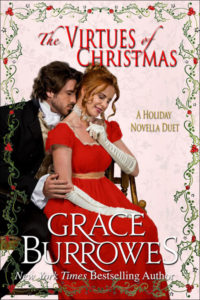 Two things, though, can get me to peek at other possibilities even after I’ve made a decision: First, approach the topic with a sincere agenda to listen to me first, without trying to change my mind. If you show me that your mind is open, that you’re eager to acknowledge common ground and acknowledge what’s true and right about my position, there’s some possibility you might open my mind too.

Second, use pictures. Ditch the rhetoric altogether. Find charts, graphs, photos, and other visual evidence and let it speak for itself.

I will try to find a way to hang onto my truck–just in case we have a bad winter–but I’m also going shopping for a hybrid. I got the picture.

Has an image ever changed your mind, or given you resolve you lacked previously? To one commenter, I’ll send a signed copy of The Virtues of Christmas.

28 comments on “Warming to the Idea”