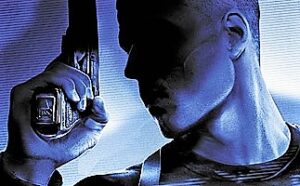 In a certain corner of Romancelandia, the alpha male stalks as the uber-hero. He’s first of all, tough. His physical prowess is undisputed, and if you cross him, he will flatten you. He solves a lot of problems with violence, which earns him the respect of all who behold him. Only underhanded cunning can bring him low, but such is his determination and resilience, that he will triumph over even brilliant cheaters, and crush them beneath his size 13 black biker boots.

These guys have never really worked for me, unless they are also written with human depth–humor, tender sentiments, unexpected hobbies, foibles, and other traits we expect real men to have.  I encounter the alpha male most often when I’m judging contests, and I’ve been assigned the romantic suspense entries. All too often, half-way 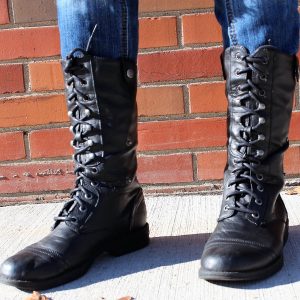 through the book I’m wondering: Is the only difference between the hero and the villain that the hero is a more effective killer who takes lives on behalf of the “right” flag? And we’re supposed to fall in love with that? Really?

So when I came across a TED talk by Frans de Waal, the primatologist who popularized the term “alpha male,” I gave it a watch. According to de Waal, we think–or have been taught to think–of an alpha male as the guy who wins the fight for reproductive rights in the chimpanzee troop, because the ability to fight hard and be big and strong must surely be the traits nature favors for perpetuation of the species. This mythology would have us believe that nature itself wants the biggest bruiser to get the most representation in the gene pool, and nature is never wrong. 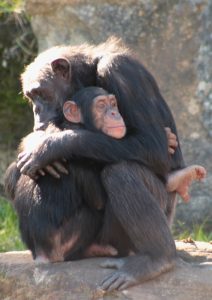 Except, that’s not how any of this works. Turns out, the alpha male has two jobs that take up most of his time. The first is to serve as an impartial judge of disputes. Without reference to whether the unhappy parties are his family members or unrelated to him, he adopts a disinterested perspective to settle differences. This flies in the face of genetic priorities, but the evidence is incontrovertible. The alpha male must be a fair judge.

His second big job is consolation. He is the great giver of pats on the back and hugs, whether the aggrieved are the losing parties in his courtroom or a family dealing with the loss of an infant at the paws of a rapacious cheetah. He’s Mr. There-There, I share your loss. I’m sorry for your troubles. He’s clergy, in other words.

Maintaining his alpha status is much more about justice and compassion than about violence or dominance. If an alpha male is well liked, he can be deposed as the top dawg and still enjoy plenty of reproductive privileges, suggesting–again–that nature values 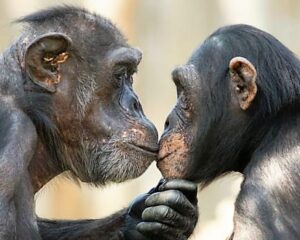 charm, compassion, and fairness more than a violent temper.  Moreover, our closest primate kin–the bonobos–are matriarchal, and their communities thrive by solving almost all problems with copulation rather than aggression. You surely don’t see many mainstream tales based on that scientific fact, do you?

I suspect the inaccuracy of the alpha male myth doesn’t come as much of a surprise to romance readers. We have little patience for thugs and bullies, and certainly don’t fall in love with them. What I do wonder is why the science was so widely mis-characterized in the first place, and why any man worth a meet would have accepted the myth at face value, much less let it come to represent a persona to be mistakenly admired or emulated.

Who’s your ideal hero? To one commenter, I’ll send a $50 Amazon gift card.