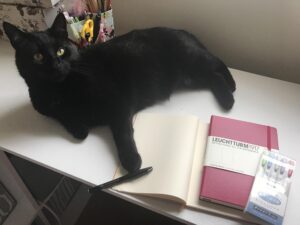 I am indebted to Neil Gaiman’s writing masterclass for reminding me to keep paper and pen near at hand at all times. I knew this, but way led onto way, and I got out of the habit. And all times means ALL times. By my bedside, when tromping the neighborhood in pursuit of the daily step count, in the grocery store. Why? Because we know how the old brain-eroo works.

We have an executive mental mode for Getting Stuff Done. This cognitive approach is for solving problems, doing task-oriented work, and checking off to-dos. Then there’s the unfortunately named default mode, which is equally productive, but much quieter. We kick into  default mode in the shower, driving a familiar route (say, to the horse barn and back), and sometimes when sitting in meetings (or, um,  writers’ workshops). 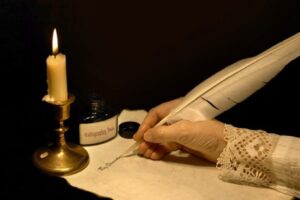 In the default mode we are also Getting Stuff Done, such as bringing connections up from the subconscious (sometimes experienced as an aha!), deciding what we stand for, and making long-term plans based on our values. But default mode can be coy. If you don’t jot down the brilliant aha! or what-if, it can swim away never to be seen again. When you physically write the thought down, you signal to the brain that the concept has weight and merit, and the imagination–rather than forgetting it–will embroider on the idea further.

This carries over to the classroom, where we know that physical note-taking results in greater comprehension and retention than typing notes into a computer does. Why? Because the physical act of writing is fundamentally different from typing, and 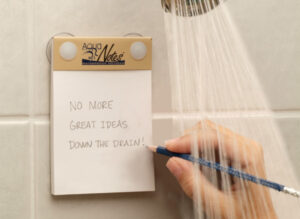 something about writing helps anchor thoughts in memory more effectively than typing does. Then too, when you write on paper, you are not simply taking dictation. You must paraphrase what’s presented, boil it down, and use your own symbols, sketches, and abbreviations to record it. You have to not merely listen, in other words, you must also think.

Writing by hand has other benefits in the classroom besides improving comprehension and retention. Students who write by hand are not sitting behind a physical device, fixated on the screen and keyboard. Class discussions evolve from the teacher-student dialogues common in computer-note-taking classes, into group-wide conversations of more depth and variety. That too, makes the material more interesting and memorable. 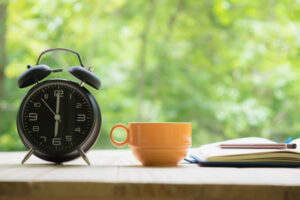 Many writers begin their days with what are called Morning Pages, a time to physically write about what’s on their minds or where they want their stories to go. I finish my day journaling, but I’ve fallen into the habit of journaling on my computer. I’m going to go back to handwriting those final thoughts of the day, as I did for years, just as soon as I recreate a space in my house where handwriting is comfortable (ahem). You know–a desk that isn’t commandeered by a computer?

Do your handwrite anymore? Why or why not? If you were going to re-introduce the skill, where would be a good place to start? To one commenter, I’ll send a $50 e-gift card.