Look closely and you can see people along the rail at the top.

Americans are apparently somewhat notorious for smiling, compared to other cultures. I was warned by several Francophiles not to expect big cheery grins in Paris, and those warnings proved useful. What I did get, when I walked into any shop, approached the information desk at the subway, or started my day at the conference, was a hearty, “Bonjour!”

The hotel desk clerk said it as I wandered by, the lady in the breakfast dining parlor said it to every guest, the guide who took us around Versailles said it when he met us, though he also offered a friendly handshake. My sister had been told the same thing: Don’t smile your way through France. You will probably look foolish, and for sure you will look American.

One explanation for the Smiling American is that ours is a wonderfully diverse land. Fewer than 10 percent of those dwelling in France are immigrants, and about half of those immigrants are from neighboring European countries.  The US, by contrast, has 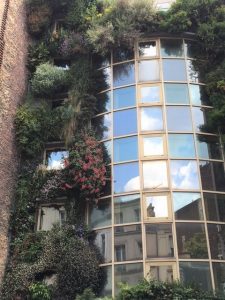 Facade of our hotel

the largest immigrant population in raw numbers of any nation (about 47 million compared to France’s 6 million), and those folks total more than 14 percent of the whole. Then too, our immigrants are from Everywhere.

Add to that how often Americans move–on average, 11 times throughout life, compared to the Europeans’ four times–and the great cultural diversity of even our native-born citizens (didn’t your mother bake a chocolate potato cake every year on March 17 in honor of St. Patrick? My mom did.), and we’ve ended up with a situation where it can be pretty handy to have a non-verbal signal for, “I’m not here to make trouble.”

So we smile, and I LIKE that we smile. Nearly 20 percent of French people smoke, and nearly 30 percent of their student-age population smokes. In the US, we’re at about 14 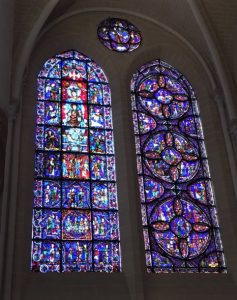 percent overall for smokers, and for college students it’s even lower. I like that too, but I didn’t realize our countries diverge on this issue until I noticed that at nearly every sidewalk cafe I passed in Paris (I passed dozens), somebody was smoking at a table.

I had a wonderful time in France, but I also came home appreciating that I no longer smell cigarette smoke at American restaurants. I smile a lot in the course of a day out here. I see tons of people in the US from all over the world and they smile at me too. We’re footloose compared to a lot of other societies, and that can mean we see a lot of different 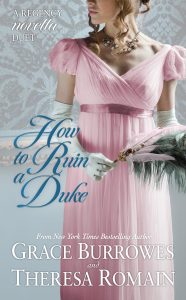 terrain in the course of American life.

It has been easy for me lately to see what’s amiss with my country, not as easy to appreciate its many good and dear qualities. A time away has helped me hit re-set in that regard, and has me smiling (like an American) a little more than I was before I went away. What do you like about where you are right now?

To one commenter, I’ll send a $50 e-gift card. And if you’d like a review e-book copy of next week’s novella duet release, How to Ruin a Duke, just drop me an email at graceburrowesATyahoo.com.

30 comments on “When You’re Smiling…”