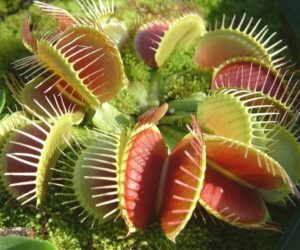 I got stuck this week in a FB argument… the kind of stuck that means long after I’d bowed out of the thread–a discussion of the proposal to make gun owners buy liability insurance–I was still waging a yeah-but battle in my head with a troll who isn’t worth the bother.

I know why this particular moral Venus fly-trap caught me.

I once upon a time represented a kid in foster care court. Little guy was two when he was shot in the chest by his four-year-old sibling. The result was paralysis for the victim from the sternum down. The weapon belonged to an off-duty cop who left it in the unlocked glove compartment of his unlocked cruiser, the safety off, and the gun loaded. Another kid found the gun, and left it in the two-year-old’s home. Mom and Dad were upstairs when this happened, big to-do, investigations all over… 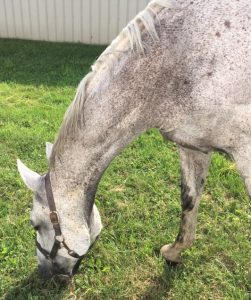 The cop got administrative leave. The child got life in a wheelchair, peeing through a catheter. His family could not afford to make his home wheelchair accessible, his sister became a CNA so her second and third unpaid jobs could be looking after her brother. I can rattle off tons of cases like this, and get myself all worked up over each one of them.

I have all this baggage, I pack it around behind me in a little red wagon of vicarious trauma, inborn advocacy skills, and un-howled outrage. For the most part, I manage pretty well, but occasionally, I lose my balance, and some trog on social media can temporarily hijack my peace. I’m better now, thank you, in part because I went to ride my lesson horse and that guy makes everything better, but also because I focused my imagination on Ludwig Beethoven.

Dear Ludwig was not long on charm, his family was barely respectable. He wanted to study with Mozart, but nope. Then he hoped to study with Haydn–another nope. By the time he was thirty–many nopes later–his hearing was going, and oops–Napoleon was 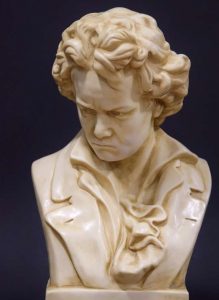 leaving a literal trail of destruction across Europe. Not such a good time to be peddling tunes to the idle rich. Beethoven idolized Napoleon, bought into all that liberty, equality, fraternity stuff… until Napoleon crowned himself Emperor and showed himself to be (among other things) a vainglorious, warmongering, bloodthirsty hypocrite. Who knew?

So there’s Beethoven, scrounging hard for work, deaf, politically disillusioned, no longer able to perform in public, no love life worth a mention, his family either troublesome or not exactly supportive… the guy had a right to cop an attitude, but what does he do? WHAT DOES HE DO?

He writes the Symphony No. 9 in D minor, Op. 125. If he had written only the finale to that one work, he’d have added transcendent glory to the human condition, but he also wrote the Appassionata, the Pathetique, the Eroica Symphony (No. 3), the Emperor Concerto, the Fifth Symphony, the Eighth, the Pastoral Symphony, the Seventh… ye gods, ye gods. An entire age worth of artistic glory, from the pen of one cranky, disabled, not very happy guy. 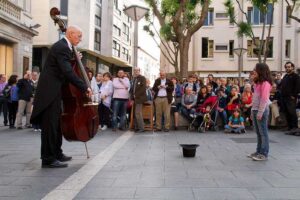 And he did most of this while unable to hear his own creations. Stop and cry about that for a minute. I cannot wrap my mind or my heart around fortitude of that magnitude, I can only be inspired by it.

I get down. I have bad days, I feel overwhelmed, and I need to hide and rest from time to time, but on my worst, worst days, I think of Beethoven. I think of Beethoven–deaf but still writing works of immense beauty for the rest of us to hear–and I know that hope and joy can shine despite all odds to the contrary.

Who or what is your Beethoven? To one commenter, I will send a $50 Amazon e-gift card.

31 comments on “When Only Ludwig Will Do”