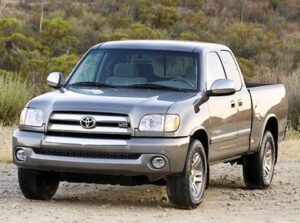 For years, I drove pick-up trucks. I needed a vehicle with enough power to pull a two-horse trailer, and I wanted one with good crash test statistics. Got me a Tundra, and fell in love. Driving on the California freeways, I felt safe in that truck. I had excellent visibility and plenty of oomph. In the snow, it handled well for a truck even without 4WD, and with 4WD that truck was a beast.

Except, it was a beast that was killing the planet. 15 MPG was disgraceful, and once I no longer needed to haul a horse trailer, I could not justify owning a truck. I passed the truck onto my daughter to be her barn vehicle and got myself a used hybrid. (Daughter drives a hybrid for everyday too.) 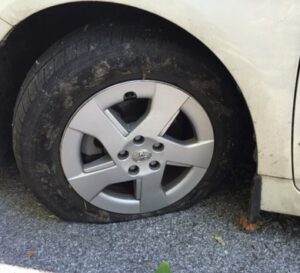 I HATE my hybrid. Yes, it gets nearly 50 MPG, but I can’t see over the bedamned hood when the car angles uphill–not something I knew to check out on a test drive, because what idiot would design a car with a blind spot in the direction of travel? I can’t see out the back because the back seat is too high, and the little back-up camera doesn’t work for doodly-squat in high contrast light.

Last week, I ended up with flat tire. I probably got some tree limb caught in the undercarriage because the idiot car has about four inches of clearance from the road surface. I got out The Stuff, loosened the lug nuts, jacked up the vehicle… and could not get the tire off.

I kicked, I cursed, I whacked at it with my trusty hammer, but nope. I know better than to get under the car and kick, and besides, I don’t FIT under that car. Had to call the nice man, who also kicked, cursed, and whacked, but being about a foot taller and four stone heavier than yours truly, he was able to get the blasted thing off. 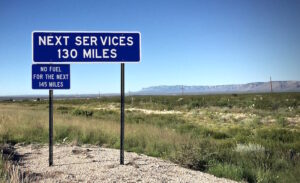 So fast forward a couple days later, and I’m having new front tires put on, because the hybrid “spare” is just a donut. The nice guy at the garage told me they are now making cars with no spare. Instead you get 24-hour roadside assistance connected to your on-board blue tooth.

What fresh hell is this? The reason I can’t see out of my car is because all cars are designed to accommodate “average man,” who is five foot nine, and has the weight distribution of a man. Visibility, dash layout, airbag deployment, seat design–it’s all for Average Man. Even the crash tests are done for Average Man because there are no crash test dummies built like a woman. None.

The result? Women are more likely to die or be seriously injured in traffic accidents. Well, OK. We can design seats that heat, cool, vibrate and recline, but we can’t design a car that accommodates a woman’s smaller frame or the anatomy she’s had since moving out of Eden. What are a few more dead or injured women anyway? 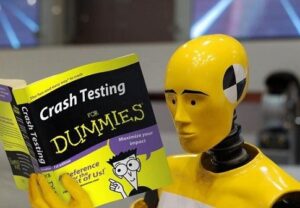 Maybe a breakdown under those circumstances is fine for Average Man. But for this little old lady, or her daughter, that’s not going to fly. Why should I have to choose between a truck that gobbles up the planet and a reasonable amount of personal safety as a female driver–because those do seem to be my options.

What do you drive? Do you feel safe in that vehicle, or did you choose it for some other reason? Did you even have a choice? To one commenter, I’ll send a $50 B&N gift card, and I promise I will be a in cheerier mood next week.

25 comments on “Driving Me Nuts”