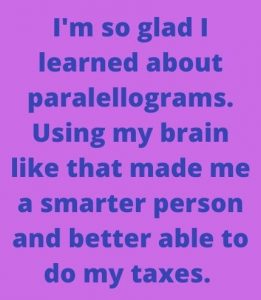 I should know better… I am on social media mostly to hang out with my readers. My family isn’t there, I’m not much of a group joiner, I certainly don’t need social media to acquaint me with the news…. but there I was, scrolling along on FB, and I saw a meme along the lines of: I am so glad I wasted my time learning about parallelograms, though it sure would be nice if I knew how to do my taxes instead.

I about sploded, because that kind of “joke” is so wrong on so many levels. It subtly bashes public education, which is one way to make me start snorting and pawing, and it more specifically bashes general education–subjects you ought to study at a basic level simply to be a well-rounded thinker. 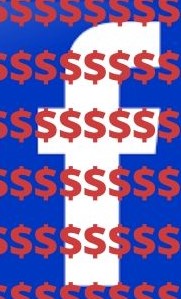 And the meme is wrong. The data we have says that people who take more high school math–Algebra II, trig, calculus (all of which come after dear old geometry), tend to be BETTER at applied math (doing taxes, managing a check book), than the people who enroll in consumer math, life skills, or other applied courses. The basic general education stands you in better stead than the “practical” education.

But the larger issue for me is, “What am I doing on Facebook in the first place?” Authors who maintain a social media presence supposedly sell more books, directly or otherwise, than authors who avoid social media. Selling books has become a necessity for me, as royalties are now my only income.

And yet, my prime directive is, “Be kind; tell the truth.” Facebook takes huge sums of money (from any and everybody, few questions asked) to propagate what it knows are lies, and–worse, from my perspective–celebrates this behavior by calling it, “Standing up for free speech.” Newsflash, Mr. Zuckerbucks: The first amendment does not protect lies. The Supreme Court is REAL clear about that. You aren’t standing up for anything except the next $1 billion added to the $85 billion you already have. 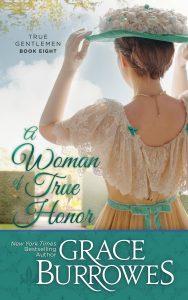 And I’m helping him make that next billion. Is he helping me sell books?

Does that even matter? I lean increasingly toward no, selling a few books  more or less does not matter, when measured against the great harm resulting from handing a huge megaphone to falsehoods favoring those with ad money. Be kind, tell the truth, and don’t lend any traction to people who ditch the truth for the next $1 billion in personal net worth.

Or am I being impractical and self-sabotaging? How do you reconcile yourself to social media–or do you? And in happier news, A Woman of True Honor goes on sale at the major retail platforms on Tuesday. (You can already snag a copy from the web store or in print.)

23 comments on “To billion or not to billion…”