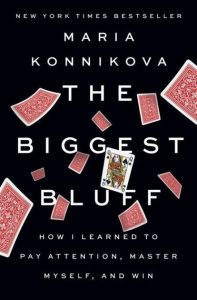 The Biggest Bluff is among the books I’m enjoying of late. I you haven’t come across it, the premise is: A PhD behavioral psychologist sets out to understand the balance between luck and skill in her life by conquering poker. The author, Maria Konnikova, studied confidence scams for her doctoral work–hence a game that blends probabilities with bluffing appeals to her–and this is her third NYT bestseller.

I like the psychological insights about everything from why we fall for well told lies, and why we have little instinctive sense for how probability works. I like watching Maria’s progression from novice to pro, but what has interested me most about this book are the personalities.

Every world-class poker player, eventually, is given a nickname on the tournament circuit. “Chewy,” might be the handle given to Elliott Funk, because he looks like Chewabaca, doesn’t say much, and never misses a trick. “Ironman,” goes to some guy named Arthur Winchell, because he does pushups during breaks. The Charminator reels you in with his friendly table talk, but watch out, because he can bluff anybody. 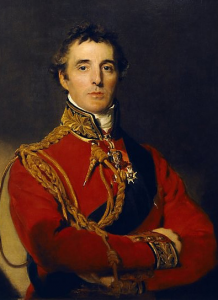 There are two kinds of nicknames, though. There’s the moniker conferred by the collective wisdom of your peers and competitors, and there’s the handle you choose for the online tournaments. One is the label the worlds gives you; the other is the label you want the world to associate with you.

I like this idea of intentional naming. I get to do it in books, choosing who is a Hiram and who is a Sebastian, for example, and I chose my pen name. The name conferred upon me at birth was a foregone conclusion, because one of my mother’s patron saint’s name days was in the same week. That all important first name, by which I will be called a million times in life, was just a function of when I popped into the world.

My pen name, though, was my decision, based on who I wanted my shelf neighbors to be (Loretta Chase, Joanna Bourne, Mary Balogh), and what name I thought resonated with my brand. 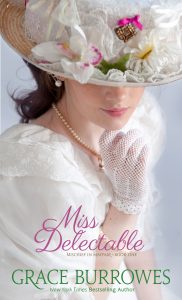 If you were going to choose the name by which you would be known among friends or co-workers, a brand new name selected to fit the persona you want to project, what would it be? Conversely, have you ever been given a nickname? Regency society dubbed Sally, Lady Jersey, “Silence,” because she was a compulsive talker. Wellington’s men referred to him as “Old Hookey,” because of his proboscis. And the nickname Lord Bryon applied to William Wordsworth was not very nice AT ALL.

To one commenter, I’ll send an ARC of Miss Delectable. This title goes on sale May-June, so the ARCs will come out in April.