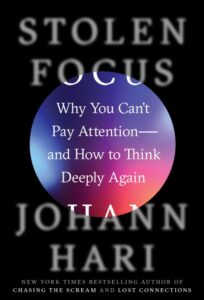 I’m noshing my way through Johann Hari’s new release, Stolen Focus. This is a work of non-fiction that examines the attention economy, and what has happened to our ability to focus our minds in the directions of our choosing. Hari left mainstream journalism in disgrace more than ten years ago (he trolled competitors’ Wiki biographies), and appears to have learned his lesson. His books are punctiliously documented, well thought-out, and wonderfully readable.

One of the studies he cites early in the discussion is an investigation into the question: Is it just me, or are humans generally having a harder time paying attention to anything for meaningful periods of time?

Apparently, it’s not just me. (Is that good news or bad news?) 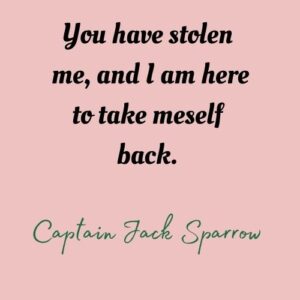 Smart folks took a look through the way-back machine to Google searches over the past twenty years, Twitter hashtags, Facebook topics and so forth. They were looking at how long a topic remained of interest. In just twenty years, the lifespan of a “trend” has shortened considerably. If you go back further, through newspapers, magazines, or books, to about 1800, the acceleration is apparent even 100 years ago.

The factor most closely related to how long we focus on a topic is… how many other stories are coming at us at the same time. The more newspapers on offer, the more books published, the more posts on Facebook, the less we drill down into any of them. Our little hunter-gatherer brains have only so much bandwidth, and we can cast a wide attentional net or a deep one, but not both. 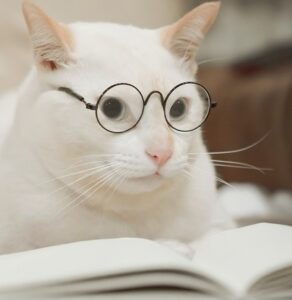 There’s much more to the discussion (about which you will probably hear in subsequent blog posts), but I was inspired to think about what content I choose to consume. I’m mighty fussy about what I feed my mind, permitting myself one excursion onto Facebook daily, and then mostly for author purposes. I do subscribe to a few newsletters.

Dense Discovery is a short take on graphic design and architecture in an age of climate change and big tech. I don’t know anything about that stuff, and I learn a lot from the linked material.

Nick Kolenda’s newsletter focuses on the intersection of psychology and marketing. The myriad ways Wall Street manipulates us fascinate (and horrify) me.

Austin Kleon calls himself “a writer who draws,” but he also learns voraciously about creativity in many media and is generous with recommendations. 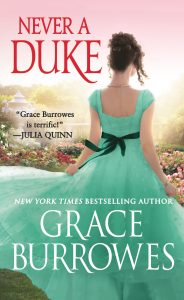 Matt Clifford’s Thoughts in Between focuses on tech, public policy, and economics (about which I also know nothing), and also includes random links to interesting research. (Male hunter gatherers socialize more than their female counterparts, and work less, but both groups do nothing way more than modern cultures, and men and women in hunter gatherer cultures tend to do equal amounts of nothing.)

I notice that no women number among my newsletter sources, and I’d like to change that. In the great sea of material clamoring for our attention do you have any go-to sources for information? I’m not talking about news media (we could go on and on about that I’m sure), but rather for mental stimulation and education.

To two commenters, I will send signed print copies of Never a Duke. (C’mon, Tuesday!)