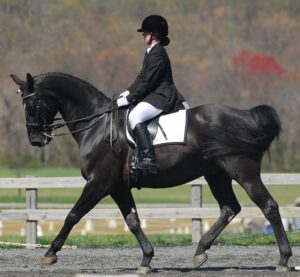 Five of my barn buddies entered a horse show at a venue about an hour from my house. In horse show terms, that’s right next door, so I buzzed on down to the showgrounds and prepared to be a rail bird, rooting for the home team.

A dressage competition consists of riding a set pattern of movements (a test), and you compete with everybody else riding the same test. The tests get harder as you go up the levels, demanding more strength, agility, and complex communication between horse and rider. You can see the kind of stuff the cool (and well funded) kids do on this compilation video.

It’s harder than it looks, for both horse and rider. Getting to the point where you and your equine partner can do the fancy lengthenings, pirouettes, and sideways movements takes years. Sometimes, you think you’ve found the horse who can take you all the way to the top, but the poor beast goes lame or has an accident or, or, or. 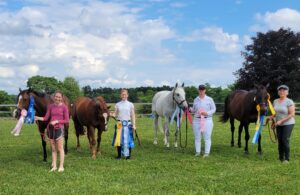 I wandered around the show grounds–a venue where I’ve competed, show mom’d, volunteered, and managed shows myself–and felt a sense of nostalgia. I watched people of all ages, from early teens to significantly older than I am, all focused on laying down the best test they were capable of, from beginner to international hopeful levels. The horses were braided and buffed, the riders were in regulation attire, the facility was beautiful.

What came over me was a sense of awe, to be in the presence of that much dedication, that much talent, that much determination and love for horses. The spirit of goodwill among the competitors was palpable as was the support from show management and the judging staff. 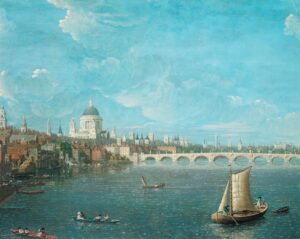 I like Wordsworth’s Composed on Westminster Bridge because it conveys some of the sense of what I felt. Old William, an avowed pastoralist, was hustling through London during the brief Peace of Amiens, on his way to France to meet a half-grown daughter he’d never seen.  Crossing the Thames at dawn, his poetic soul got a gut-punch of meaning and beauty from a very unexpected urban quarter.

To ride well, especially in competition,  is physically, emotionally, and mentally challenging, and all around me were athletes who had made significant sacrifices for the chance to trot their stuff around those arenas. I never felt as an equestrian that, “I coulda been a contenda,” but watching those horse and rider teams, I did feel part of a legacy that is in the main good and beautiful. (I can’t say that about all equestrian sports.) 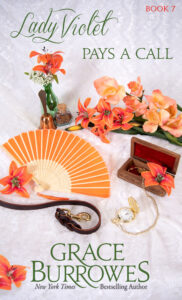 I find value in being at once humbled by something vast and touching, and also exalted to be in its presence. I’m reminded of how amazing life can be and how lucky I’ve been, in so many ways. Those hours at the horse show were good for me, and my riding has been more focused and–I dunno?– reverent for what I experienced there.

Have you encountered any moments of awe lately? Are there any that shine in memory like a gorgeous beacon? I’ll add three commenters to the ARC list for Lady Violet Pays a Call.