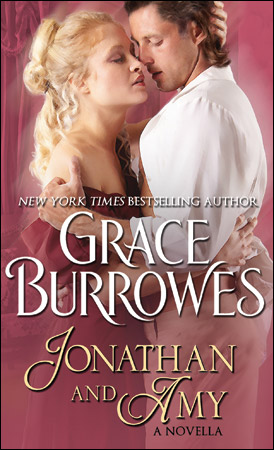 Widower Jonathan Dolan knows how to work hard, make pots of money, and dote on his daughter Georgina, but his humble Irish antecedents have not prepared him for the challenge of wooing Amy Ingraham, Georgina’s elegant, genteel governess. Amy indicates a shy pleasure in Jonathan’s overtures, just as a distant cousin turns up and claim Amy is obligated to marry him. Jonathan must be clever, determined, and above all else honorable if he’s to win not only Amy’s hand, but the respect of a society only too willing to judge him harshly.

Governess Amy Ingraham has been attracted to her pupil’s gruff, handsome father since she interviews for the job, and now Mr. Jonathan Dolan has asked her to help improve his deportment in anticipation of a visit to his aristocratic in-laws. Amy agrees to polish Jonathan’s manners, but it’s her awareness of him that’s developing the keenest edge…

The week flew by, a whirlwind of moments for Amy to dread and then treasure, tumbling one right after another.

Mr. Dolan studied his own betterment with an intensity Amy found daunting. If she handed him a book on manners after dinner, he had it memorized by morning. If she suggested an outing to the park with Georgina for the sake of variety, he used it as an opportunity to practice everything, from his polite conversation to the proper means of handing a lady down from a vehicle.

“You haven’t taught me to waltz, Miss Ingraham. If I’m someday to escort my daughter to social functions, I’ll need that skill.”

Georgina had darted out of the breakfast parlor to take her dog to the garden, leaving Amy alone with her employer for much of the meal.

“Georgina won’t be waltzing for another ten years,” she remarked. “You have plenty of time to learn.”

“Miss Ingraham—” He sounded as if he were going to sail into one of his well-reasoned, volume-escalating tirades that Amy so enjoyed, provided they were directed at others.

His jaw snapped closed. He touched his napkin to his lips. “Miss Ingraham, it’s entirely likely Lord Deene’s marchioness will take it into her pretty head to have a da—a deuced ball in honor of this visit or some such rot. I will not be made a fool of for the sake of your faintheartedness.”

“You do not relish the idea of an Irish bear mincing around the da—the blasted ballrooms of proper—Mother of God.” On that exhalation, he leaned forward and used the side of his thumb to brush at the corner of Amy’s lip. “You’ve a crumb…of toast.”

One more fleeting caress and he sat back, scowling mightily. “A toast crumb is distracting, and it’s not in the rule books.”

Amy reached for her tea but didn’t trust herself to bring the teacup to her mouth. The feel of his callused thumb grazing her skin so gently—a butterfly-soft thumb-kiss that sent warmth sizzling through her person—was more than a lady should have to bear without swooning.

“Sometimes, one must improvise, Mr. Dolan.”

“But a gentleman doesn’t touch—”

Before she could stop herself, Amy placed a finger to his lips. “A gentleman can hardly allow a lady to be embarrassed by toast crumbs, can he? Moreover, you would not have used the same measures had Lady Deene been the one sporting a crumb, would you?”

He still looked a trifle tense. “Of course not. Deene would draw my bloo—my very cork. More tea, Miss Ingraham?”

He’d certainly taken to offering Amy tea, but even she had a limit for how much jasmine-scented libation she could down at one meal. “No, thank you.”

“So when do we waltz, Miss Ingraham?”

Amy did not want Georgina underfoot when they danced; she did not want the lesson to be hurried. She also did not want candlelight threatening her good sense beyond all recall. “Now, unless you have other plans?”

“I am at your service.” He rose and offered his bare hand as politely as if he’d been to the manor born. Amy made the trip through the house on his arm, allowing him to escort her through the hallways, up the stairs, and into the largest of the public parlors.

The week had seen a shift in this at least: he was no longer so wary of bodily proximity to her. When their hands brushed, when she took his arm, he no longer tensed at each and every contact.

And neither did she. Amy was learning to handle the flood of pleasure she felt when she was near him, learning to ignore the riot of sensations his scent and warmth provoked. His height and size, his expressions and intonations had become wonderfully familiar in a whole new way.

Mr. Dolan stopped in the middle of the parlor. “We’ll need music.”

“Soon.” Amy dropped his arm. “First, we’ll need the doors folded back and the rugs rolled up.”

While the footmen saw to the arrangements, Amy noted the subtle signs of unease in her pupil. He shot his cuffs, an indication that he’d rather roll them back. He ran his hand through his hair, his shorter locks making him frown each time he repeated the gesture. He paced, he looked out the window, he looked anywhere, in fact, but at her.

When the last footman withdrew to warn the housekeeper she might be needed at the piano, Amy approached the window. “Georgina is a lucky girl, Mr. Dolan. Not all parents are as devoted as you are.”

He glanced down at her. “I’m her father, of course I love her.”

Amy kept her gaze on the child and the spaniel frolicking in the grass outside. Something about Mr. Dolan’s brusque use of the word “love” made Amy regard him yet still more highly.

“Not all fathers can say the same. Are you done stalling?”

His lips quirked up in the fleeting, devilish smile Amy enjoyed so much. The only one she liked better was the one he saved for his daughter, which was so full of affection and approval, it took Amy’s breath away.

“I do not stall, Miss Ingraham. I consider my options, I develop strategy, I choose my moment.”

“You miss her mother.”

The words slipped out, completely inappropriate to the moment, and to Amy’s position in the household. Mr. Dolan’s smile became wistful, then sad.

“I miss her terribly. But as much as I miss what I had with her, I miss as well what was taken from us when she died.”

An inappropriately honest reply to a wholly misguided observation, but Amy couldn’t leave it alone. “What was taken from you?”

“We were slowly becoming friends. She was always my ally, even when I thought she was only carping and correcting to keep me in my place. A man overly endowed with pride doesn’t always make a good husband when he marries so far above himself.”

He had regrets. That he would carry such sentiments without ever giving a hint of them ought to have occurred to her.

“We all have regrets, Mr. Dolan. One makes choices without being able to guess their consequences, and one can’t always choose wisely.”

He turned from the window, his gaze betraying a lurking amusement. “Can’t one? Are you stalling now, Miss Amy?”

Oh, how she liked the sound of her name in his rumbling baritone. How she liked that he looked at her when he teased her and baited her.

He touched her mouth as she had touched his at the breakfast table, with a single, gentle finger. “A gentleman may address a woman familiar to him as Miss Christian Name in informal circumstances if the lady does not object.”

His recitation of the rule was word-perfect. Amy removed his finger from her lips and set her hand on his muscular shoulder. “The time has come to dance.”

Jonathan and Amy is available in the following formats:

Jonathan and Amy is a novella in the Windham series. The full series reading order is as follows: