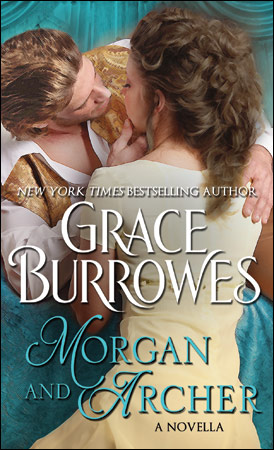 Archer Portmaine is investigating a plot against the Crown when he meets Morgan James, a young lady who suffered deafness for several years, though her hearing is largely restored when Archer meets her. Morgan believes her hearing trouble makes her a poor candidate for marriage, although her disability provides the key to unraveling Archer’s mystery, and to capturing his heart.

Archer Portmaine is doing a bit of snooping in the King’s name when his hostess, Lady Braithwaite, comes upon him prowling in her very boudoir. Morgan James, curious about the handsome blond fellow whose eyes give away nothing, decides to do some prowling of her own…

Archer let his smile degenerate into a leer and used Lady Braithwaite’s hand to tug her against his body. “I’ll leave as soon as I’ve stolen at least a kiss.”

Bother. A bit of wretched melodrama was the best he could think of, and when he’d followed through on his declaration, he saw none other than Miss Morgan James framed in the sitting room doorway, watching every moment of the performance through dancing eyes. While Lady Braithwaite’s tongue imitated a bore auger against Archer’s lips, Archer pointed directly toward the corridor, and—to the extent a man could while enduring an oral assault—glowered at the intruder.

Miss James withdrew, smirk and all, while Lady Braithewaite plastered herself against Archer from north to south and at every point in between. She was a substantial woman and determined on her objective.

Archer had nearly resigned himself to at least pleasuring the woman, when a bad situation threatened to become worse.

“Oh, my lord Braithwaite! I am pathetically relieved to see you!” Morgan James sounded near tears right outside the sitting room door. “I am completely turned about, the women’s retiring room is nowhere in sight, and my need for it becoming urgent.”

Lady Braithwaite retracted from Archer as if bitten. “He mustn’t find me here. My pin money, my allowance for the modiste, my little habit at the whist tables—”

She looked around, eyes huge, while Archer stifled the urge to clap a hand over her mouth.

“They’re leaving,” he whispered. “He’s escorting the young lady down the hall. Listen to the footsteps.”

Relief replaced panic in Lady Braithwaite’s gaze, followed by an air of wounded dignity assumed with astounding rapidity. “I must be going, Mr. Portmaine. Steal your kisses from somebody else.”

With pleasure. “My apologies, Lady Braithwaite. I should not have presumed.” He bowed low, the better to encourage her departure. If she ran true to Archer’s experience, her first stop upon returning to the ballroom would be her husband’s side. She’d fuss and coo and spend at least ten minutes making sure all and sundry observed their marital accord.

Which gave Archer about fourteen minutes to open the safe, review its contents, and return to the ballroom without being seen.

Morgan and Archer is available in the following formats: 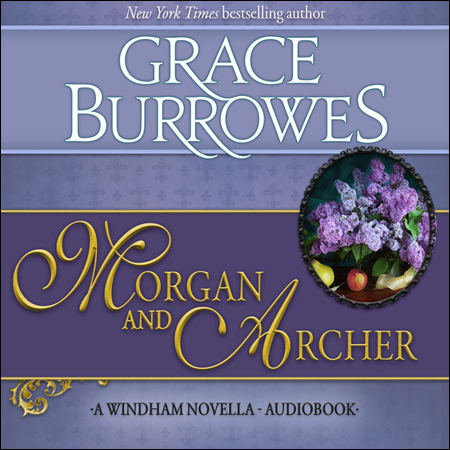 Morgan and Archer is a novella in the Windham series. The full series reading order is as follows: