When I paid attention, I learned a lot from my horse. My most recent Personal Steed was a 17.1 hand Hanoverian (doing business as an Oldenburg) gelding whom I referred to as Boy Genius. When he had adequate years, his moniker morphed into Wonder Pony, and several other appellations, depending on the quality of our ability to communicate. 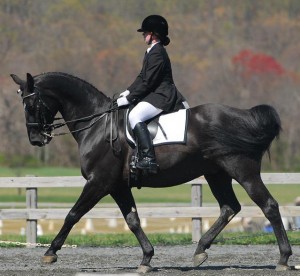 I am not by nature an athlete. My idea of a good day is to sit for at least six hours in front of the computer, spewing make believe and swilling decaf tea, then having a nice lie down with my latest potential keeper (book, that is) for a few hours, then a few more hours of composing at the computer. I will feed my beasts at the beginning and the end of the day, which entails heaving a few hay bales, maybe lugging a 50-pound sack of pony chow from the top to the bottom of the barn, and chucking out some 5-gallon buckets of water, but God forbid I should break a sweat.

As much as I loved my horse and enjoyed riding, there were many days when my energy for the task was not great. Then too, there were windy days, when the arena might creak and groan, provoking my dearest steed to occasional lapses of dignity. Or sometimes it might be stinkin’ hot, or stinkin’ cold. Stinkin’ rainy was only half an excuse because I rode in an indoor arena, but it would do in a pinch.

Some days, I would get to the barn, tack up my horse (or the grooms, sly boots, would tack him up for me), and lead him into the arena, and still, the motivation to ride would not well up in my soul. “I’ll just ride him at the walk,” I’d say. I’d swing aboard, pat my pony, and off he would saunter. He has a lovely walk, does Wonder Pony. He walks like a gunslinger, and if you make allowances for his species, the guy is certainly tall, dark and handsome.

We’d walk this-a-way, and that-a-way, and pretty soon, we’d have walked just about every way you can in a modest indoor, all the while having a nice visit with my instructor about Life In General, or maybe a little about how the horse feels to me as we walk. What the hell, I would say to my pony after about ten minutes, let’s just loosen up a little at the trot. But the horse has a pretty big trot, and as is the case with some warmbloods, he loosens up better at the canter.

So what the other hell, I’d cue him into a nice, relaxed canter, which is kinda fun. But you can’t canter just one way, so we’d canter around the other direction and maybe try a flying change across the middle, and before long, I’m trying to put the horse together in a working trot, working on suppleness, moving him off my leg (this is a term of art), and generally engaged in the meat of a worthwhile riding lesson. 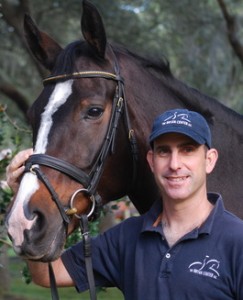 My instructor (also tall, dark and handsome, but not the same species as the horse) probably pulled my horse aside first thing in the day, and worked out this little conspiracy, but eventually, when I’d say, “I think I’ll just sit on him at the walk,” it was all both of them could do not to laugh at my prevarications outright.

Let them laugh. They are my prevarications, and they serve me well. When I’m not enthusiastic about taking a walk (which is 90 percent of the time) I’ll tell myself, “I’ll just go a half mile to the neighbor’s mail box). This is generally the start of a two-mile walk. When it comes to housework, I tell myself, “Just vacuum the bedroom. You can worry about the downstairs later.” And sometimes, I do, and sometimes, as long as I have the darnedd thing out…

When it comes to my writing, prevaricating is very handy. “I’ll just read over what I wrote yesterday….” “I’ll just buff the last scene, add a little dialogue…” “I’ll just get out one scene, then have a cup of tea….” If you ride the right horse, if you’re patient with yourself, and you don’t judge yourself for nibbling your way through life’s challenges, you too can complete twenty-five manuscripts without ever once pressuring yourself  to finish a single book.

Have you ever walked your way to a significant accomplishment? Tried just one date, signed up for a single course… tell us about it. To one commenter, I’ll send a signed copy of “Lady Eve’s Indiscretion,” which is also a story about taking small steps toward a big goal.

42 comments on “How my horse taught me to write…”