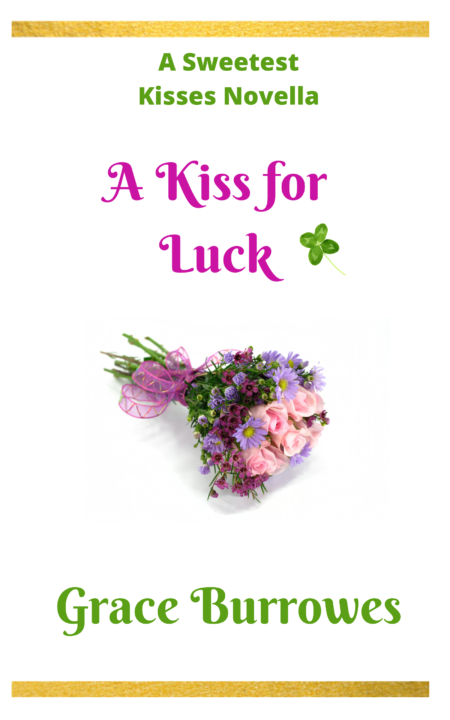 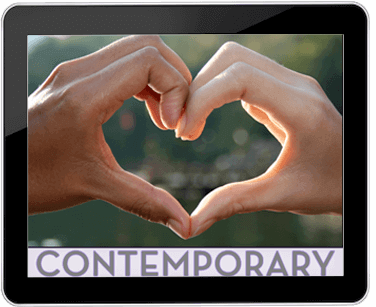 A Kiss for Luck

A novella in the Sweetest Kisses series

Game designer Sadie Delacourt has moved to the peaceful, bucolic town of Damson Valley for a fresh start where she can keep an eye on a recently divorced sister and her small nephew. Sadie plans to focus on her business and her family, until handsome private investigator Gideon Granville turns his focus on Sadie.

When Sadie learns where Gideon has been aiming his snooping skills, she’s ready to delete him from her life entirely—until Gideon is all that stands between Sadie and the trouble menacing her loved ones.

Note: This novella is a pre-quel to The Sweetest Kisses contemporary romance trilogy. A Single Kiss, The First Kiss, and Kiss Me Hello will be republished shortly and available on the web store.

A Kiss for Luck:

Sadie Delacourt’s temporary neighbor, Gideon Granville, has courteously returned the dish in which Sadie sent over a batch of brownies. He’s about to courteously get a little friendlier, too…

“I brought you temptation, “Gideon said, “honeycrisp apples. You can get them only this time of year, and these are local. I’m told they go particularly well with fresh, warm brownies.”

He wiggled his eyebrows, which in contrast to his plummy, Hugh Grant accent was…funny.

“I’m not having brownies and apples for dinner without some protein and fat to go with them,” Sadie said. “I have a good, pungent cambezola in the crisper, and a respectable raw milk cheddar if you’re not the adventurous type.”

“I’m not,” he said, touching her right peacock feather earring with a single finger. “Not the adventurous sort. I observe, I report, I analyze. Conservative colors, comfortable non-descript clothes, that’s me.”

“Adventures are over-rated,” Sadie said, because Gideon wasn’t talking about his wardrobe or her interior design scheme. “Adventures can be exhausting and pointless. Give me bare feet and a plate of fresh brownies any day.”

Gideon had a killer smile. Not much teeth to it, but a slow, spreading mirth that turned his lips up, lit his eyes, and sent handsome careening closer to wicked. That smile overtook his features like sunshine chasing off a gloomy morning, and Sadie got all manner of ideas about avatars and angels.

“You’ll abet my scheme to drive Finn barmy, then?” Gideon asked. “He stole my last brownie and that after I’d generously offered him two at lunch.”

“And this guy’s your partner?”

“And a friend. He’s Welsh, I’m English, and Cromarty’s Scottish. We meet up periodically over a few pints—the ale bar, we call ourselves, or the ailing bar—and drink to the Queen’s health.”

“No, you do not. You toast the All Blacks or your favorite football team, and I’m not talking about the Washington Redskins.”

Sadie got out the flour, sugar, butter, eggs, salt, vanilla, baking powder—not baking soda—cocoa and baking chocolate, because it seemed she and her neighbor were to spend at least part of the evening together.

“It’s odd,” Gideon said, taking off his jacket. “Back home, the three of us would probably not have crossed paths. We’d each keep to our mates, and each have definite notions about the royal family, Scottish independence, and the Economic Union.”

“None of that matters. We all appreciate a good ale and somebody to enjoy it with. What can I do to help?”

“Wash your hands, and get the double boiler down from over the oven. My sister and I are in a similar situation. We fought like tomcats growing up, but then we lost her dad and our mom, and the big, scary world put our silly squabbles in perspective. I’ve moved out here to be closer to her, and I’d cheerfully die for Jay-Jay, even if she is pig-headed to a fault and thinks the games I design are a waste of time.”

Sadie’s nephew Sam didn’t think so, though, and that mattered a lot.

While Sadie cracked eggs and measured ingredients, she also learned a few things about her assistant. Gideon had younger half siblings living in southern California with his mom and step-dad, and he also had the knack of visiting over a cooking task. By the time the brownies were in the oven, Sadie had delivered both her sermon on the virtues of games—the kind of games she designed, any way—and her plans for creating HD TV screen savers that formed a part of a room’s décor.

“Like an aquarium or a window scene, tailored to your mood, time of year, and tastes,” she said, turning the hot water on the mixing bowl and baking implements piled in her sink. “You could have downtown Manhattan outside your virtual window, Brighton beach, or even the cows I see from my bedroom.”

“You’re excited about this,” Gideon said, taking the cutting board off its wall peg. “I don’t know as my work exactly excites me.” He sliced up two apples in nearly exact eighths, his movements precise and competent.

What would excite this guy? 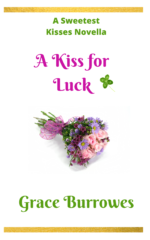 “I couldn’t do work I wasn’t excited about,” Sadie said, feeling vaguely sorry for him. “Surely, you must like some aspect of your job?” She resisted the urge to snitch a bite of one of his magic apples, though the restraint was out of character for her.

“What about a legal case could possibly be cheering?” Sadie asked, fishing in her silverware drawer for a cheese knife and a slicer. “My sister went through the divorce from hell, and her kid’s still in therapy a year later.”

Gideon nudged a slice of apple into perfect formation. “Therapy’s a good idea.”

“Bet nobody thought to put your little backside into therapy while your dad was dying, did they?”

His parents hadn’t been drunks, but they’d been involved in a medical drama that had left their son dressing in dull colors and avoiding other people’s ideas of structure—and dealing with one fractured, unhappy family after another, albeit indirectly.

“I played a lot of soccer. That’s bleu cheese.” He’d wrinkled his nose, as if his tone of voice left any doubt about his opinion of bleu cheese.

“It’s cambezola, and if you don’t like it that’s just dandy. More for me.” She kissed his cheek, because soccer was a fine outlet, but it couldn’t heal every hurt any more than gaming could. “I’m dreading when my nephew has contact with his dad again. Find us some mugs and bring the tea pot.”

Gideon got down a pair of green ceramic mugs Jay-Jay had made before marriage to Hollister had crippled every creative impulse she’d ever possessed.

“Your nephew doesn’t even see his dad? That’s unusual.”

Sadie sensed Gideon’s interest was partly professional, and partly that of a man who knew what growing up without a father entailed. Maybe that was why he couldn’t afford to be excited by his work?

“The kid saw Dad regularly beat the crap out of my sister, and then dear old Dad tried to bribe and bully his own son into telling the judge Mom threw herself down those stairs as a litigation tactic. We finally got the right judge, the right experts, and my nephew had the right lawyer. I gather law schools don’t routinely teach lawyers how to talk to a terrified five year old.”

The living room was in shadows as Sadie put the cutting board down on the coffee table. Gideon followed with the mugs and the tea pot as the scent of brownie-bliss wafted from the kitchen.

Somebody ought to turn on some lights, but Sadie pulled drapes closed instead.

“Candles, I think,” Gideon said. “A true test of whether you’re honestly unpacked.”

Candles. Sadie was unpacked all right. “I have candles and matches both, though the candle smells of pumpkin spices.”

One of her favorite scents, a little like the one Gideon wore. When she would have brushed past Gideon to return to the kitchen, he looped an arm around her waist.

“Gideon?” His movement had caught her off guard, it had been so swift and subtle.

He kissed her on the mouth, not a lingering, uh-oh-here-we-go kiss, but rather, a this-is-not-your-cheek-I’m-kissing-madam-kiss.

He drew back half an inch. “I hate soccer to this day. Your nephew is lucky to have you and so is your sister, because you’re the one who insisted he have a good therapist.”

For another instant, he held her, loosely, and Sadie waited in case he had more truths to air—for she had set up the appointments with Dr. Tom and was making the resulting co-payments, too.

When Gideon let her go, she stood for a long moment in the chocolately warmth of the darkened kitchen, trying to recall what she’d gone there to find.

A Kiss for Luck is available in the following formats:

A Kiss for Luck is a novella in the Sweetest Kisses series. The full series reading order is as follows:

Novella: A Kiss for Luck •