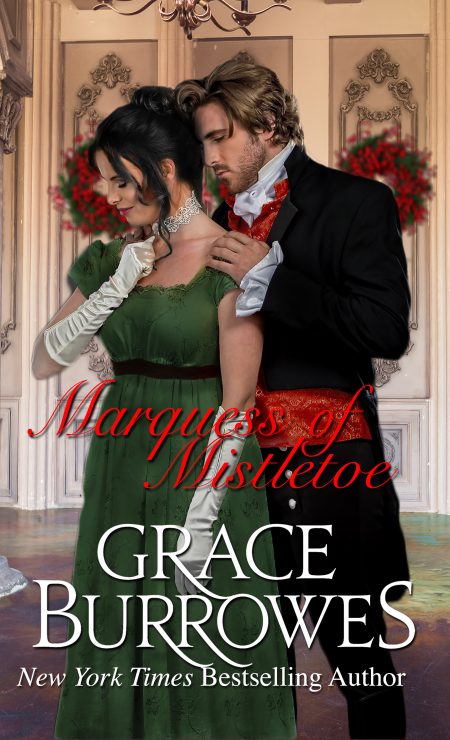 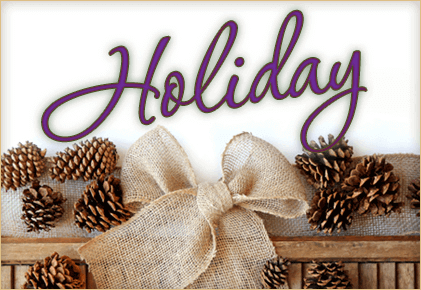 He left her standing in the cold…
As a girl of seventeen, Marielle Redford waited and waited for Leopold Drake, her first love, to meet her at their trysting place so they could elope. She got a bad case of lung fever and a broken heart for her troubles.

She sent him off to war…
Leo Drake was all set to share his future with the lady of his dreams, when he was told Marielle had changed her mind. Bewildered and heartbroken, he joined the army and sailed for Spain. It’s ten years later, and fate has thrown Leo and Marielle together on Christmas night. Will they say farewell for all time, or let the magic of the holidays rejoin their hearts?

“Choosing a bride is a pragmatic undertaking for a man newly saddled with a title,” Leopold, Lord Cadeau said. “You will please cease your sentimental maunderings on a topic about which you know little, Raphael.”

Leopold had left military life behind months ago when a second cousin’s title had been dumped in his lap, as unappealing and demanding as a squalling infant.

Raphael Jones, Leo’s former batman, had marched with him across Spain, through France, and at Waterloo. When Leo had acquired the title, Rafe had appointed himself valet, general factotum, and conscience to the new Marquess of Cadeau. Nothing Leo promised, threatened, or demanded dislodged Rafe from his post.

Perhaps Leo’s marchioness would know what to do with an old soldier who refused to follow orders.

“It’s Christmas Day, your worship,” Rafe said, as if corner glee clubs tipsy with wassail, shouted holiday greetings, and the very calendar had escaped Leo’s notice. “To be looking over a lady during the holidays as if she’s a mare on offer at Tatts is a sacrilege.”

The cold had numbed everything Leo owned—from his toes to the tip of his nose to his saddle-weary fundament—but it hadn’t quite driven out his doubts. Rafe had a point: What sort of man ignored Yuletide family gatherings to interview a prospective wife?

A man who wanted the whole business concluded. Leo had endured months in Vienna as a marquess with means, and didn’t care to repeat that ordeal in London. Forced marches were one thing, German princesses popping out of powder rooms—and their bodices—were quite another.

Though what sort of woman spent Boxing Day looking over a prospective husband instead of socializing?

“Your cork-brained notion of courting will be the death of us both,” Rafe went on. “Can’t imagine you’ve asked a lady to travel in this weather. And at Christmas.”

Cold alone wasn’t that much of a challenge. Between stout wool, a sound horse, and common sense, Leo could deal with cold. But the wind…

The bitter weather came straight at them, as if Nature herself was determined that Leo not reach his objective. Leo couldn’t say if snow was falling, but it was certainly blowing in his face, a million grains of frigid misery, telling him to seek shelter and rethink the contract he was considering signing.

“You will please recall,” Leo said, above the soughing of the wind, “the lady has asked me to travel at the holidays, and she’ll be looking me over too. I’m to be her Boxing Day gift, or my wealth and title are.”

Rafe’s horse had slipped, likely from fatigue, for the snow wasn’t deep.

“Spend more effort guiding that creature, and less haranguing me, and you won’t risk his hide.”

“I’m trying to guide your perishing self,” Rafe said, patting his horse. “Thankless, hopeless job though it is, and this being Christmas too.”

The season of the Christ child’s birth was an ironic time for Leo to become engaged. He’d once dreamed of children and a future with a woman who’d have made a wonderful mother and a devoted wife. Marielle Redford had been his best friend, his dearest delight, and then she’d become his deepest regret.

Now she would be nothing but a memory, which was for the best. She’d married another, Leo had gone for a soldier—not in that order—and life had moved on, one bitter, bleak mile at a time.

“See what you’ve gone and done,” Rafe said, half a mile later. “You’ve lamed my poor, wee Wellington with your mad scheme.”

Wellington stood eighteen hands in his bare feet, could pull a laden canal barge without breaking a sweat, and—unlike his owner—was the soul of uncomplaining calm. He’d been a gift from Leo to Rafe years ago, and the pair took excellent care of each other.

“He’s not lame,” Leo said, assessing the horse’s gait. “He’s tired of listening to you whine and prattle, as am I, as is Beowulf.”

Leo’s horse shook his reins, suggesting at least one creature in all of creation still had some respect for his employer. 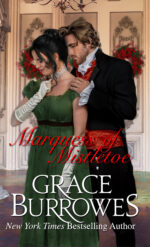 “I tell you, the old boy’s going off, just like he did north of Toulouse.”

Which, thankfully, had been more than two years ago. “He wasn’t lame, he was simply tired and you were drunk.”

Leo obliged Rafe with further argument for the next two miles, mostly so they’d both stay awake. The wind howled, the horses plodded onward, and London came inevitably nearer. Leo was riding toward his future, toward marriage to a woman of suitable rank to marry a marquess.

Somehow, years ago, Marielle Redford had managed to walk up the church aisle and put youthful dreams behind her. How had she done it, and had she spared a thought for the young man who’d once loved her more than life itself?

“We’re stopping at the next inn,” Rafe declared. “A man who’s served the crown loyally for years deserves to use a chamber pot in a nice cozy parlor rather than freeze his pizzle off in the inn yard. I could also use a toddy, should some kind soul be interested in preserving me from a cruel death on the road. A plate of cheese toast wouldn’t go amiss either.”

They’d reached a hamlet west of Chelsea. Leo hadn’t been here for years, hadn’t let himself acknowledge that his travels would take him past this monument to his dashed hopes.

“Looks like a right, snug establishment with a proper respect for the joyous season,” Rafe observed.

The Ox and Ass was festooned with pine roping, wreaths hung in the windows, and red ribbons had been twined about the porch pillars. Evening was an hour away, but the lamps in the yard were already lit, and two noisy boys were pelting each other with snowballs.

“We’ll stop long enough to rest the horses and get warm,” Leo said. “Then we push on to Chelsea, because I must be punctual for my appointment tomorrow morning. A gentleman does not keep a lady waiting, no matter the weather.”

“A gentleman,” Rafe said, “does not marry a lady he’s never met, nor undertake his courting in the office of a bedamned, useless, sniveling solicitor on Boxing Day.”

Next Rafe would visit the topic of the head injury Leo had supposedly sustained at Badajoz, or the daft notions of the Quality, for if nothing else, acquiring a title had promoted Leo from gentry to Quality.

“My solicitors don’t snivel,” Leo retorted. They fawned though, and they sent along bills for services at a great rate.

“Methinks you need a toddy,” Rafe said. “The cold has gone to your brain.”

“For once, I agree with you. A toddy is in order, and we can drink to the health of my bride.” His potential bride. Nobody had signed any settlements, nobody had agreed to anything, but Leo was prepared to be generous.

“He’s gone barmy,” Rafe informed his horse. “Poor sod left the better part of himself on the battlefields, and this damned title has about finished off his common sense. What has the world come to, when a man whose bravery was noted by Old Hooky himself, an officer whose men marched through hell for him without complaint…”

Rafe’s litany continued as they rode into the inn yard, ceasing only when the ordeal of dismounting had to be faced. Leo swung down carefully, and his frozen feet accepted his weight with a predictable agony of protest.

Nothing for it, but to solider on. Leo hoped the woman he was to court was more sanguine about their union than he could be. Fate had landed him at the last place he’d kissed Marielle, and the least he could do was raise a warm glass of spirits to feckless dreams and the woman who’d inspired them.

Marquess of Mistletoe is available in the following formats:

After your purchase, please check your email for a new message from Bookfunnel, containing the link to download your book. You will automatically be guided through the steps to deliver the book to your device using Bookfunnel. The good folks at Bookfunnel offer customer service that can walk you through any quirks unique to your device or software.

Buy Marquess of Mistletoe from Grace