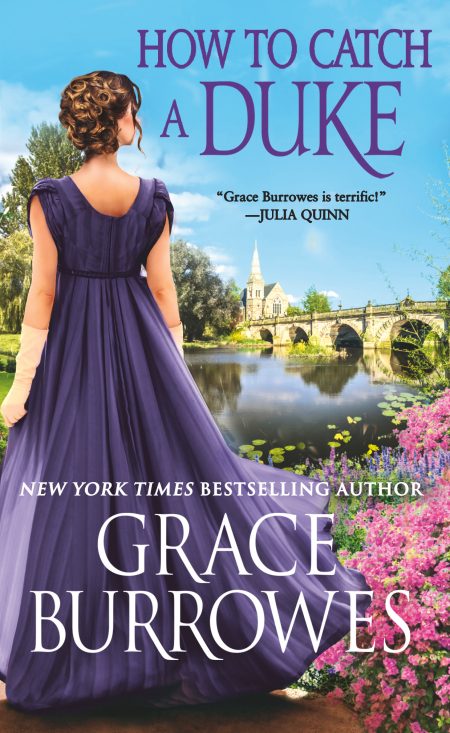 How to Catch a Duke

Book 6 in the Rogues to Riches series

Miss Abigail Abbott desperately needs to disappear, and the only person she trusts to help her do that is Lord Stephen Wentworth, heir to the Duke of Walden. Stephen is brilliant, charming, and—when he needs to be—absolutely ruthless. So ruthless that he proposes marriage instead of a mock murder to keep Abigail safe.

Stephen knows that Abigail has the dignity and determination of a duchess and the courage of a lioness. When she accepts his courtship of convenience, he also discovers she kisses like his most intimate wish come true. For Abigail, their arrangement is a sham to escape her dangerous enemies. For Stephen, it’s his last, best hope to share a lifetime with the lady his dreams—if he can convince her his love is real.

How to Catch a Duke:

“I have come to ask you to murder me, my lord.” Miss Abigail Abbott made that announcement as calmly as if she were remarking on the pleasing composition of a still life with apples.

“Miss Abbott, good day.” Stephen Wentworth struggled to his feet so that he might offer his visitor a bow. “While it is my greatest joy to accommodate a lady’s pleasure wherever that quest may lead, in this instance, I fear I must disappoint.”

Miss Abbott had earned Stephen’s notice from the moment he’d met her several months ago. May she ever bask in heaven’s benevolent light, her unexpected call at his London abode renewed his delight simply to be in her presence.

“You are the logical party to execute this errand,” she went on, pacing before the library’s hearth as if he hadn’t spoken. “You’ll see the thing done properly, and you are in line for a dukedom. A man so highly placed will face few repercussions should he be charged criminally.”

That the butler had shown Stephen’s guest into the library was a breach of etiquette. Miss Abbott should have been received in the formal parlor, which faced the street and thus afforded a lady’s reputation greater protection.

Bless all conniving butlers. “Might we sit, Miss Abbott? My knee is—as it were—killing me.”

She glowered at him down the length of her magnificent nose. “I importune you to commit homicide, and you jest.”

In actuality, she’d demanded that he commit femicide. Rather than refine on vocabulary, Stephen used his cane to gesture at a comfortable wing chair set before the blazing fire. He waited until Miss Abbott had seated herself before he settled onto the sofa.

“Your faith in my criminal abilities is flattering, Miss Abbott, but my family takes a dim view of violence toward women—as do I. I cannot, alas, accommodate your request.”

She popped out of her chair and stalked across his new Axminster carpet, gray skirts swishing. “And if I were a footpad trying to snatch your purse, a brigand menacing your person? Then would you send me to my reward?”

She moved with all the confidence of a seasoned general preparing to fight for a righteous cause, though her attire made for very odd battle finery. Stephen had never seen her dressed in anything but gray frocks or dark cloaks, and the severity of her bun would have done credit to a particularly dour order of nuns.

Everything about Abigail Abbott was intended to disguise the fact that she was a stunningly well-built female with lovely features. Such attributes made her merely desirable, and Stephen had come to terms with desire years ago—for the most part.

What fascinated him about Miss Abbott was her wonderfully devious mind, and how her penchant for guile waged constant warfare with her unbending morals.

“Why would a professional inquiry agent with very few unhappy clients need to die?” Stephen asked. “From what my sister has said, your business thrives because you excel at what you do.”

Miss Abbott had been a very great help to Constance up in Yorkshire. To see Miss Abbott in London was both a lovely surprise—to see her anywhere would be lovely—and worrisome. If the Creator had ever fashioned a woman who did not need or want any man’s assistance, for anything, Miss Abbott was that formidable lady.

“My situation has nothing to do with my profession,” Miss Abbott replied, resuming her seat. “Might you ring for a tray?”

“Is that how you go on with your lovers? Issue commands couched as questions? Sir, might you apply your hand to my—”

“My lord, you are attempting to shock me.” Her expression was so severe, Stephen was certain she was suppressing amusement. “As a dilatory tactic, this is doomed to fail. I am nearly impossible to shock, and also quite hungry. A tray, if you please. In more genteel circles, this is called offering a guest sustenance. Hospitality, manners. Need I explain further?”

“Tug the bell pull twice,” Stephen said, gesturing again with his cane. “I have been taken captive by the sofa. You are being dilatory, madam, evading a simple question: Why must you die? I would be desolated to think of a world without you in it.”

He offered her the God’s honest truth, at which she sniffed.

“You are doubtless desolated eleven times a day.” She gave the bell pull a double yank and sat back down. “I am not asking you to rid the world of my presence in truth, though I must convincingly appear to die. I have some means, and I can make my way from England easily enough once I’ve been officially expunged from the race.” 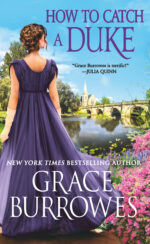 “My dear Miss Abbott, had you wished to terminate your existence in truth, you would have done so by now. Never for a moment did I think you expected me to actually take your life.”

A scintilla of the starch suffusing her spine eased. “I should have been more clear. I know you are not a killer.”

“I am, as it happens, though that’s old business.” Old business she should at least be warned about before she awarded Stephen any points for gentlemanly conduct. “I generally avoid violence if I can do so without compromising my honor.”

“And when you cannot?”

What an odd question, and an excellent example of why Stephen delighted in this woman’s company.

“I keep my affairs in order and make sure my family remains untroubled by my actions. If your work has not forced you to flee for your life, then who has inspired you to take the grave step of asking for my help?”

Miss Abbott stared at her gloved hands, then consulted her pocket watch, which looked to be a man’s article, heavy and old-fashioned. As stage business went, the watch was badly done, because the ormolu clock on the mantel was in plain sight and kept perfect time.

Stephen let the silence stretch, unwilling to trick Miss Abbott into any admissions. She’d resent the manipulation, and besides, she was tired, hungry, and unnerved. To take advantage of her in a low moment would be unsporting. Far more interesting to put her back on her mettle, and engage her when she could bring her usual trebuchet of logic and the boiling oil of her asperity to the battle of wits.

The tray arrived, and without Stephen having to ask, Miss Abbott poured out. She apparently recalled that he liked his tea with a mere drop of honey. She used far more than a drop in her own cup, and made short work of two toasted cheese sandwiches and an entire sliced apple.

“You’re not eating, and the food is delicious.”

“Not much appetite.” Stephen had an enormous appetite, but a man with an unreliable leg ought not to push his luck by carrying unneeded weight. He was nowhere near as well disciplined when it came to his mental appetite for solving puzzles.

Still, he had learned some manners, thanks to the ceaseless efforts of his family. He waited until a mere half sandwich remained on the tray before he resumed his interrogation.

“Have you committed a crime?” he asked, starting with the usual reason people shed an identity.

“I have committed several crimes, as do most people in the course of a week. You, for example, are likely behind on the longbow practice required by the Unlawful Games Act of 1541. Very bad of you, my lord, considering how much interest you take in weaponry.”

A footman came for the tray, and Miss Abbott’s look of longing as he departed made Stephen jealous of an uneaten half sandwich.

“We will not be disturbed again,” Stephen said. “For you to resort to sixteenth-century legislation for your obfuscations means, my dear, that you are very rattled indeed. Miss Abbott—Abigail—you are safe with me, as you knew you would be. I cannot help you if you refuse to apprise me of the nature of the challenge before you. Who has presumed to menace you?”

She had taken off her gloves to eat. She smoothed them against her skirts now, one glove atop the other, matching the right and left, finger to finger.

“I have apparently angered a peer,” she said. “Infuriated him, though I haven’t wronged him that I know of.”

Why come to the brother of a duke for aid unless…? “A marquess is after you?” They were few in number, particularly if the Irish and Scottish titles were eliminated from consideration. “An English marquess?”

She tucked the gloves away into one of those invisible, capacious pockets sewn into women’s skirts.

“Do you promise not to repeat what I tell you, my lord?”

“You are exhausted and afraid, so I will overlook the insult you imply.”

Her head came up, like a dominant mare sensing an intruder in her paddock. “I am not afraid. I am vexed past all bearing.”

She was terrified, and that was such a rare prospect that Stephen himself became uneasy. “Give me a name, Miss Abbott. I cannot scheme effectively on your behalf unless you give me a name.”

She had the prettiest gray eyes. All serious and searching, and those eyes were worried. That some fool had given her cause to fret vexed Stephen past all bearing. He’d not enjoyed a rousing fit of temper for ages, and the pleasure of putting a marquess in his place appealed strongly.

“If somebody told me a mere marquess had blighted the confidence of Miss Abigail Abbott, that I would find hard to credit. The ranking imps of hell could provoke you to brandishing your sword cane, and for the massed armies of Britain you might slow your stride a bit. St. Michael the Archangel flanked by the seraphic host could inspire you to a respectful pause. But a marquess? A lowly, human marquess?”

Her hands bunched into fists. “He has tried to harm me, twice. Before he tries again, I will simplify matters by having you commit an arranged murder.”

Like an arranged marriage? “Who is this pestilence of a marquess?” Stephen mentally began sorting through Debrett’s. This one was too old, that one too young. Several were on the Continent, a few were simply too decent or too arrogant to resort to intriguing against a female of common origins.

Women were easy to ruin, and a female inquiry agent with a tarnished reputation would be ruined indeed.

“Lord Stapleton,” he said. “He’s an idiot. Arrogant, wealthy, nearly ran off his own son, God rest the earl’s randy soul. Stapleton has made his widowed daughter-in-law’s life hell. You needn’t die. I’ll kill Stapleton for you and the world will be a better place all around. Shall I ring for another tray? You’re still looking a bit peaky.”

Order your copy of How to Catch a Duke!

How to Catch a Duke is available in the following formats: 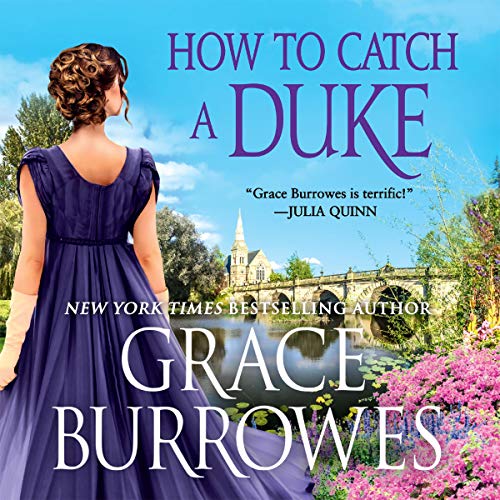 How to Catch a Duke is Book 6 in the Rogues to Riches series. The full series reading order is as follows: