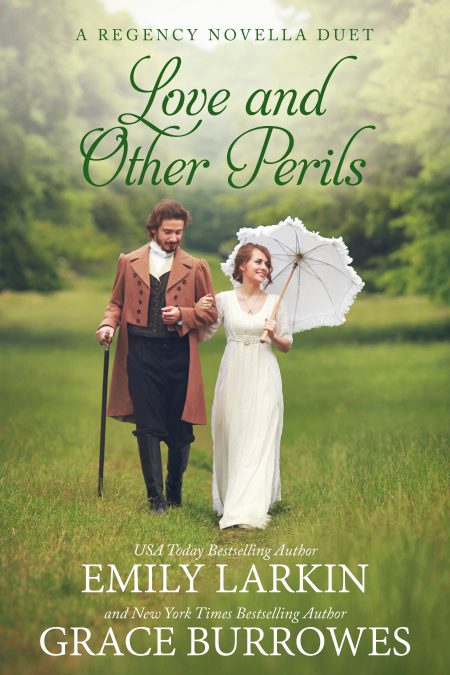 Love and Other Perils

Take one scientific swain, one dashing lieutenant, one no-nonsense librarian, one adventurous young lady, one very large tomcat, and two mischievous kittens…and what do you have? Two recipes for disaster! Or perhaps for love…

Kisses and Catnip, by Grace Burrowes

Max Haddonfield is a man of science, devoted to logic and rational observation. That he also finds homes in libraries for stray cats is merely a sensible exercise in controlling the mouse population…or something.

Antonia Mainwaring is practical to a fault and all but on the shelf. When a certain soft-spoken library patron talks her into allowing a large male feline to bide on the premises, somebody starts purring–and it’s not the cat!

When Lieutenant Mayhew boards the stagecoach bound for Southampton he anticipates an uneventful journey. True, he’s carrying kittens, but it’s only eighty miles. What could possibly go wrong?

He’s not expecting to meet the enchanting Miss Willemina Culpepper. Nor is he expecting the kittens to be quite so good at vanishing. Mayhew has faced many challenges in his career as a soldier. Traveling from London to Southampton should not be a challenge. Except that it is.

Love and Other Perils:

Kisses and Catnip by Grace Burrowes

“You have mice.” Three words, laden with judgment. The sentence wasn’t spoken so much as intoned, a Dies Irae rumbling in masculine tones across the library’s quiet.

Because the speaker held a cat, and that cat peered at Lady Antonia Mainwaring from her eye level, it seemed as if the cat had spoken.

Antonia had a ferociously firm grip of English and a firmer grasp of common sense, and yet, she needed the moment it took to remove her spectacles and fold the earpieces to orient herself.

The cat—a large, long-haired grey tom with a grumpy green gaze—switched its tail. The beast reposed in the arms of a tall man with light brown hair. The fragrance of a bakery clung to him, and his clothing suggested he worked for whatever daily bread he consumed. His coat was coarse wool, rumpled, and none too new. He wore no hat and the red plaid scarf about his neck was missing half of its tassels.

“Mice,” he said, in the same inflection preachers referred to original sin. “They delight in books. They chew the bindings to feast on the glue, shred the pages to make their nests, destroy wisdom itself for their furry little comfort.”

Antonia remained seated, though this big, unkempt man and his disgruntled cat made her want to get to her feet, the better to run from any stray thunderbolts.

“I have seen no evidence of mice on the premises. Are you a library patron, sir?”

Winter was bearing down in all its unrelenting bitterness, and the library was a refuge for the homeless. Antonia’s emotions on that point were mixed. In a city that considered itself the jewel of civilization, nobody ought to die of exposure to the elements, but she was at a loss for what one said to a person in such straits. “May I help you find a book?” seemed unforgivably insensitive.

And must London’s unfortunates be so formidable?

The cat commenced purring, as if the beast enjoyed mention of his name. Its expression made clear that the library was poorer for not extending to felines the privileges of membership.

“Where do you see evidence of mice?” Antonia asked.

“Come,” he said, supporting the cat with one arm and striding off in the direction of the biographies. The only patrons at the library today were the Barclay sisters, a pair of white-haired spinsters who pretended to read Fordyce’s sermons by the hour. Antonia suspected they were conserving coal while hiding from their neighbors for they never took Reverend Fordyce home with them.

The gentleman with the cat disappeared between two rows of shelves and then took the spiral steps up to the mezzanine. His pace was deliberate, and for a big man, he moved quietly.

The sisters exchanged a glance as he passed them. Miss Dorothy wrinkled her nose.

The man seemed impervious to this rudeness, though the cat sent a glare in Miss Dorothy’s direction.

“Here.” He knelt at the back of the H though T row of biographies. “Mice.”

He pointed to what could only be mouse droppings. His fingernails were clean, which struck Antonia as odd.

“Lucifer can solve your problem,” the fellow said. “He’ll expect the occasional saucer of milk and a bit of fish for his wages. If you crack a window for most of the day he’ll come and go as nature demands. Feed him on the premises, and he’ll defend the books all night from any and all rodents.” 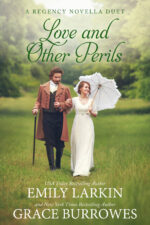 He passed her the cat before Antonia could step back. In the narrow space between the rows, that left Antonia and Lucifer’s owner exactly one cat-width apart.

One surprisingly light cat-width. “You are nothing but skin and bones, you poor fellow,” Antonia said, cradling the cat to her chest. “You look formidable, and you make a prodigious noise, but you’ve missed a few meals.”

The shameless creature licked her chin. The sensation was odd, halfway between a scrape and a tickle. The cat was too light, a ball of fluff where a muscular predator should be.

“He’ll do the job God intended him to do,” the man said, “your books will be safe, and the mice will decamp for less perilous surrounds.”

Antonia had grown up with the requisite progression of pantry mousers, though she didn’t particularly like cats and certainly hadn’t been permitted anywhere near the kitchen. Cats lacked a dog’s loyalty, lacked sufficient size to discourage intruders, and—probably their worst failing—lacked an adoring gaze.

“I don’t have the authority to permit a cat to live on the premises,” she said. “I’m a volunteer, and I’m sure the manager and the board of directors will have to convene a meeting and discuss—”

The man stroked the cat’s head, which meant his hand was very close to Antonia’s person. She wasn’t frightened, but neither was she accustomed to biding so near a fellow unless he was standing up with her before a ballroom full of chaperones.

“By the time the Board of Fossils assembles,” Lucifer’s friend said, “by the time they conclude their dithering, you will have lost a dozen bound volumes to the ravages of the rodents. Who will pay to have them replaced, assuming you can find copies of the damaged books? Which would you rather explain, the miniscule expense of feeding Lucifer, or the on-going drain of resources a plague of mice will effect?”

His speech was educated, for all his hair was untidy. He was, in fact, a handsome man, now that Antonia studied him. His eyes were an arresting shade of blue, closer to periwinkle, and the stubble on his cheeks was golden. He struck Antonia as a book with its pages bound in the wrong order.

He smelled of the bakery, but was built to handle a plough.

His hair needed a trim, though his diction was precise.

His wore a laborer’s rough clothing, but his touch on the cat’s head was gentle.

From a distance, he might have been an unlettered lout, but his eyes held intelligence, even a hint of humor?

Or challenge. He was challenging her to accept this feline.

“I make no promises,” Antonia said. “You may leave the cat with me for now, and the chophouse can oblige with some sustenance for him. I’ll have to discuss this with Mr. Kessler.”

He gave Lucifer one last, slow caress. “Be vigilant, my friend. The literacy of Bootjack Street depends upon your courage and devotion to duty.”

Antonia led the way back to the steps, and while she could have put the cat down, she didn’t. He was a comfortable sort of cat to hold, not the kind that struggled and clawed against being carried.

“If the board should disapprove of Lucifer, how can we return him to you?” Antonia asked.

The day was frigid, but at least no precipitation fell. The weather alternated between sleet, snow, and rain of late, and sometimes all three at once. Lucifer’s friend paused by the main door and re-wrapped his scarf about his neck.

“You’ll remember to crack a window for him?” he asked.

“I know that cats must heed the call of nature. I’ll leave instructions that the window by the service door is to be cracked during daylight hours. Mr. Kessler will likely have an apoplexy, but we don’t heat the back hallway in any case.”

Lucifer rumbled along, the most placid mouser Antonia had ever encountered.

“He likes haddock,” the man said, hand on the door latch.

“Very well, but how can I return him to you? I must have a name and a direction.”

She had the sense that leaving Lucifer behind was difficult, which implied the man didn’t intend to see his cat again. That bothered her, and not because the board of directors was likely to evict the cat. They wouldn’t, not when the alternative was to hire a rat catcher.

“Don’t bother the board,” he said. “Tell Kessler you got the idea from the Countess of Bellefonte, who keeps mousers in all of her libraries. Show Kessler evidence of the infestation, and he’ll soon decide that acquiring a cat was his own idea.”

Mr. Kessler was nothing if not fastidious. Mouse droppings would horrify him. “I need your name and direction,” Antonia said. “You clearly care about this cat, and he’s not fared well recently. If he’s turned back out on the street, he likely won’t last the winter.”

Now the wretched beast was bopping his head against Antonia’s chin.

Miss Dorothy pretended to be browsing the travelogues.

The man bent near. “Max Haddonfield. My rooms are above the bake shop on Dinwiddie Lane.”

He left on a gust of frigid air and pulled the door firmly closed behind him.

Order your copy of Love and Other Perils today!

Love and Other Perils is available in the following formats:

After your purchase, you will automatically be guided through the steps to deliver the book to your device using Bookfunnel. The good folks at Bookfunnel offer customer service that can walk you through any quirks unique to your device or software.

Buy Love and Other Perils from Grace