A Lady Without Peer

His Grace for the Win (from The Duke’s Bridle Path):
Philippe, Duke of Lavelle, has sworn off all things equestrian after his brother’s riding accident. Just one tiny problem: The woman who steals Philippe’s heart, Harriet Talbot, loves horses, and generally only notices men when they’re in the saddle. Will Philippe rise to the challenge, or come a cropper for the sake of true love?

The Will to Love (from How to Find a Duke in Ten Days)
The Earl of Ramsdale is convinced that his late uncle’s will holds the key to finding at least one portion of a long-lost Renaissance manuscript. The only person skilled enough to translate the will in ten short days is Miss Philomena Peebles, who has no patience with handsome, presumptuous earls. Will Ramsdale find the fabled literary treasure, or lose his heart to the last woman he should propose to?

A Lady Without Peer:

From The Will to Love, previously published in How to Find a Duke in Ten Days…

Seton Avery, Earl of Ramsdale, has a pressing need for some very arcane linguistic skills. In desperation, he has advertised, hoping to hire a suitably brilliant scholar. Response is much less than he’d anticipated, but also much more interesting…

Having dispensed with the tedium of a social call upon Professor Peebles’s household—the professor had literally stuck his head through the doorway, and that head had still worn a sleeping cap at midafternoon—Ramsdale sought out that haven of rational conversation and fine fellowship, the Albion Club. Its appearance was unprepossessing, the location just off St. James’s Street ideal.

And the quiet in the reading room was blessedly reliable.

This was a club for grown men, not raucous youths looking to make extravagant wagers or debate politics far into the night. The food was good, not merely expensive, and the service attentive rather than haughty. Ramsdale occasionally took rooms here rather than bide at his own town house, and thus nobody looked askance as he proceeded to the second floor and let himself into a familiar parlor.

“Good day, my lord,” said Pinckney, his valet and general factotum at this location. “Three more responses came while you were out. The first of the gentlemen is scheduled to arrive within the hour.”

Ramsdale turned so Pinckney could take his greatcoat. “That’s five altogether. Only five people in all of London, Oxford, and Cambridge can read medieval law Latin?”

For Ramsdale had advertised at the universities as well.

“Perhaps it’s the case that only five people who need coin can fulfill your request, my lord. But surely, from among a field of five, you’ll find one who’s acceptable.”

The Duke’s Book of Knowledge was reportedly written in plain, straightforward Latin, which owing to a lack of marching centurions or strutting gladiators, hadn’t changed much over recent centuries. The problem was not the long-sought Duke, but rather, Uncle Hephaestus’s will. Uncle had believed that medieval monks invented the crabbed, complicated law Latin to save on ink and parchment and that saving on ink and vellum remained a worthy goal.

Hence, he’d written his damned will in law Latin, and in the abbreviated version of the abomination still practiced by elderly clerks and particularly mean judges. Such was the incomprehensibility of that hand that, in the last century, it had been outlawed for court documents.

“Shall I ring for tea?” Pinckney asked.

Ramsdale had choked down two cups of gunpowder while maundering on in the Peebles’s parlor. He had no wish for more damned tea. Why did the ladies never contribute anything of substance to a conversation? They smiled and nodded and yes-my-lorded but never said anything?

“Order a tray with all the trimmings,” Ramsdale said. “If I’m to interview starving scholars, I’d best feed the poor devils.”

Then too, Pinckney would help himself to a biscuit and a sandwich or two, and nothing on the tray would go to waste. The footman and groom would see to that when supper was hours away.

The scholars, alas, proved a shabby lot. Two reeked of mildew, two could not fumble through a single sentence of Uncle’s codicil, and the fifth wanted a sponsor for yet another expedition to plunder the Nile.

Time was running out, and defeat was unacceptable.

“Have any more responses come?” Ramsdale asked when the Nile explorer had been sent on his way.

“Not a response per se,” Pinckney said, tidying tea cups and saucers onto a tray. “There is a gentleman below stairs who said he’d wait rather than make an appointment. Tidy young chap, relatively speaking.”

The afternoon was gone and so was Ramsdale’s patience. “Send him up, but don’t bother with another tray. I doubt he’ll be staying long.”

Pinckney used a small brush to dust the crumbs from the table onto a linen serviette. “And will you be going out this evening, my lord?” 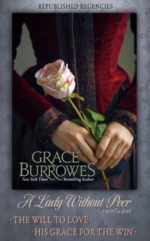 Ramsdale had been ruralizing in Berkshire for the past month, being a doting godfather to a friend’s infant daughter. Had a fine set of lungs on her, did his goddaughter.

“I might renew acquaintances around the corner,” he said. “If there’s anything to miss about Town, it’s the company of the ladies.” Though the women who dwelled at the odd St. James address didn’t consider themselves ladies.

Ramsdale had spent many a pleasant hour in their company, nonetheless. His favorite chess partner was a madam of no little repute, and he delighted in the linguistic variety her employees brought to an evening. French, Italian, and German were all to be heard in the main parlor, along with a smattering of more exotic languages.

Pinckney withdrew, and Ramsdale gathered up what passed for his patience as a slim young fellow was admitted by the footman.

“My lord.” The scholar bowed. He had a scraping, raspy voice. He also wore blue-tinted spectacles that must have made navigating after dark difficult, and in the dim light of the sconces, his countenance was very smooth.

Too smooth. “Have you a card?” Ramsdale asked.

The scholar’s clothes were loose—probably second- or third-hand castoffs—and his hair was queued back and tucked under his collar. He passed over a plain card.

“We are not acquainted, my lord, though I have tutored younger sons from time to time.”

Probably true. “Well, have a seat, and lest you think to impress me with your vast qualifications, let’s begin by having you transcribe a few lines from this document.”

Of the two seats opposite Ramsdale’s desk, Peebleshire took the one farther from the candles. Ramsdale passed over Uncle Hephaestus’s first codicil—there were nine in total—and Mr. Peebleshire took out a quizzing glass.

“I have paper and pencil, or pen and ink if you prefer,” Ramsdale said.

“This codicil,” Peebleshire read slowly, “is made by me, the undersigned testator, Hephaestus George Louis Algernon Avery, being of sound mind and composed spirit, as witnessed in triplicate hereto, and does hereby revoke any previous codicils, but does not revoke my will, which document is dated—”

Ramsdale plucked the document from Peebleshire’s pale hands. “You can translate at sight?”

“The legal documents all tend to follow certain forms, my lord. The vocabulary is limited, until you reach the specific bequests and conditions of inheritance. A modern holographic will written in such arcane language is unusual, though.”

“My uncle was an unusual man.” Generous, vindictive, devious, and merry. In life, Ramsdale hadn’t known what to make of him. In death, Uncle had become purely vexatious.

Ramsdale repeated the exercise with the second codicil—the only one he himself had muddled through in full—and again, Peebleshire translated accurately at sight.

Bollocks. Ramsdale rose and took a candle from the branch on his desk. “What compensation do you seek for your services?”

Peebleshire named a sum per page—shrewd, that—as Ramsdale lit several more branches of candles around the room. The wages sought were substantial, but not exorbitant for a true scholar.

“How quickly can you complete the work?” Ramsdale asked.

“That depends on how much of it there is.”

Uncle’s will ran on for thirty pages, and the codicils for another sixty. As near as Ramsdale could fathom, seven of the codicils were rants against the established orders at Oxford and Cambridge, with much ink spilled on the reputation of one Professor Peebles.

“Nearly a hundred pages,” Ramsdale said, “and I also have correspondence Uncle wrote to various scholar friends. Can you translate French?”

“German, and all of the romance languages, Greek, Aramaic, Hebrew, Latin. My Coptic is less reliable, and I am not confident of the Norse languages. I’m gaining proficiency in spoken Arabic, but the written language is a challenge.”

If that recitation were true, Ramsdale would have to admit to surprise. “Then you are clearly qualified to meet my needs,” he said, “but before we discuss the rest of the terms, I have one more question for you.”

Because Ramsdale had lit every blessed candle in the room, he could see his guest well. Peebleshire sat forward, apparently eager for the work.

“What is your question, sir?”

“How will I explain to your dear papa, that his darling offspring has taken to parading about London after dark in men’s clothing, Miss Peebles?”

Order your copy of A Lady Without Peer!

A Lady Without Peer is available in the following formats:

A Lady Without Peer is part of the Republished Regencies series. The full series reading order is as follows: