Morgan and Archer
Morgan James, sister-by-marriage to the Windham ducal heir, has spent several Seasons dutifully trooping with her in-laws to every ball and musicale in Mayfair. The glittering London society she never thought she’d be part of has begun to pale, while solitude and quiet have grown enormously attractive.

Morgan’s longing to withdraw from society is cut short when she crosses paths with  Archer Portmaine, a distant family connection who is is investigating a plot against the Crown. Archer must foil a dangerous scheme, and Morgan, with her quick wits and unusual ability to blend into any crowd, has the perfect skills to help him capture the villain–and to capture Archer’s heart!

Jonathan and Amy
Jonathan Dolan, a wealthy Irish quarry nabob, has done the unthinkable for an otherwise sensible widower and fallen in love with his daughter’s governess.  If he’s to win the heart of proper, pretty Miss Amy Ingraham, Jonathan must turn to his former brother-in-law, the Marquess of Deene, to help him woo the lady.  Despite Deene’s willingness to aid the course of true love, Jonathan must be clever, determined, and– above all else–honorable if he’s to win not only Amy’s hand, but also the respect of a society only too willing to judge him harshly.

(From Jonathan and Amy)

“A gentleman does not make advances toward a woman in his employ.”

Jonathan Dolan’s muttering and pacing brought him to the windows of his office, where he could watch his daughter gathering flowers in the back garden. Her governess sat nearby, nose in a book, a spaniel panting at her feet.

“A gentleman does not make advances toward a woman in his employ.”

This declaration had become Jonathan’s personal Eleventh Commandment, but was no more palatable with the added emphasis.

A footman approached the pretty tableau in the garden, and before Miss Ingraham turned to face the house, Jonathan stalked away from the windows. It would not do for her to know he was staring—though she’d conclude he was merely being a vigilant papa.

And he was a vigilant papa, also a doting, loving papa, but not only that.

He was, in addition, a wealthy man in his prime who had no wife with whom to share his life or his passions. A man who had buried his beloved spouse nearly five years ago and was watching the seasons of his life march along, one lonely night followed by another. A man who had endured enough of that life, a fellow now determined to put into place a plan which—if he were successful—would improve his circumstances immeasurably.

And cast him into an unfathomable darkness if he failed.

He contemplated fortifying himself with a healthy tot of good Irish whiskey, but if Miss Ingraham got close enough for him to catch a whiff of her lemony fragrance, she’d smell the spirits on his breath.

Amy Ingraham stood in the doorway to the office, the picture of genteel English good looks: a shade taller than average, blond hair pulled back into a tidy bun, gray eyes complemented by a sky-blue walking dress several years out of fashion. The intelligence in those eyes was every bit as attractive to Jonathan as the curves filling out the dress.

“Miss Ingraham, please come in. Georgina looks to be enjoying her outing.”

“The day is too lovely to keep the child at her lessons without a break, and the dog requires the occasional visit to the gardens as well.”

She remained in the doorway, the location having symbolic significance. Amy Ingraham—granddaughter of a viscount, but neither family nor servant in Jonathan’s household—excelled at hovering in liminal spaces.

“Have a seat, Miss Ingraham.” He’d gestured to the settee near the hearth rather than one of the straight-backed chairs facing his desk. When she crossed the room, he closed the door behind her.

Merely his name, but crackling with starch and repressed lectures.

“What I have to discuss is private and regards Georgina’s best interests. Shall I ring for tea?”

She inhaled through her elegant nose, clearly torn between the need for the door to remain open and the temptation offered by a laden tea tray. To a lady raised in strict propriety, the tea tray would be a singular indicator of hospitality and manners, if not graciousness. 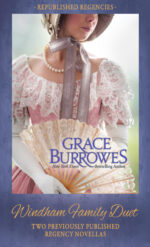 She lowered herself to the edge of the settee. “You may ring for tea. Just tea.”

Jonathan went to the door and signaled a footman. Just tea, indeed.

He closed the door, the snick of the latch sounding inordinately loud, such was the power of a governess’s disapproving silence.

“If I recall aright, your holidays are approaching, Miss Ingraham.” Jonathan stalked across the room to stand near a wing chair. “May I take a seat?”

“You are my employer, Mr. Dolan, and this is your private domain. You are entitled to sit where you please, when you please.”

She had a strong jaw, a defined chin. The jaw was set, that chin a trifle elevated, even considering he was standing over her. Where he wanted to sit was directly beside her on that settee.

He took the wing chair. “Have you a destination in mind for your holiday?”

Of course, she did. What else was she to do? Pop over to Paris and shop for some bonnets?

“May I inquire as to where you visit family?”

He could see her debating whether it was manners or deference that required her to answer. The tray the kitchen had been warned to prepare saved her from making an immediate reply.

Jonathan took the tray at the door, and when Miss Ingraham kept her gaze on the flowers beyond the window, he realized he’d fumbled. He should have taken a seat without asking her permission, he should have remained in silent, well-tailored splendor on his rosy backside while the footman brought the tray into the room, and then he should have indicated where the tray was to be set with an imperious wave of his lamentably calloused hand.

When the footman was gone and the door once again closed, Miss Ingraham studied the enormous silver tray and its contents. “Shall I pour?”

“If you pour, Miss Ingraham, then I will make you up a sandwich—or two.”

She was trying not to smile—or grimace, he wasn’t sure which. She picked up the teapot and made that perfect graceful picture of an English lady dispensing the tea. The curve of the teapot’s handle complemented the curve of her body, while the way she kept two fingers on the pot’s lid put the finishing touch on the image.

“Do you prefer mustard, butter, or both on your bread, Miss Ingraham?’

“A touch of both. This tea has jasmine in it.”

“I was given to understand it’s your preferred choice.” Her favorite. He purposely did not use that word while he liberally coated her bread with butter.

That’s all. Four small words followed by an enormous silence full of scolds, sniffs, and even a few genteel expressions of exasperation. How she must resent his summons, or possibly her entire life as Georgina’s governess.

“You won’t make this easy for me, will you?” He added a bit more butter and topped it with a dab of mustard.

“A governess does not take tea with her employer.”

Jonathan’s oldest sister, Mary Grace, had been a governess. “That depends on the household. It’s midday, Miss Ingraham. You’ve been chasing that child around the entire morning, and I’m hungry. Shall I deny myself some sustenance while we’re in discussions simply because you are too hidebound to share a midday meal with me?”

She stirred a fat dollop of cream and two lumps of sugar into his tea. “You should not. My apologies.” She held the cup out to him, her hand absolutely steady.

And even in those civilities, she managed a hint of a reproach.

Her gaze flew to his, her eyes betraying more surprise than horror.

His manners were as ragged as his stonemason father’s had been, but Jonathan Dolan had never wanted for determination. He tried again from a more honest tack.

“Miss Ingraham, I eat alone at every meal save breakfast, when you and Georgina take pity on me and afford me some company. You visit with the child while I pretend to read the newspaper, because my ability to engage Georgina in conversation is wanting. Would it be imposing too greatly to ask you to break bread with me?”

She poured a second cup of tea and sat back. Jonathan waited for her to put cream and sugar in her cup, but instead she sighed, her shoulders dropping.

“It’s much easier for me when you growl and snap, sir. This forthrightness—or charm—whatever it is, it isn’t well advised.”

“Hunger isn’t well advised.” He added thin slices of ham to her sandwich and a rectangle of yellow cheddar. “Might we declare a truce while we’re eating?”

Her lips quirked up. She had a lush mouth, one usually kept ruthlessly sculpted into a flat, inexpressive line—at least when she was with him. Jonathan held his breath in hopes she might permit herself an honest smile.

“I cannot resist a man who plies with me jasmine tea,” she said as the smile bloomed. “It’s wicked of you, sir. You must never tell Georgina.”

With that smile, Jonathan’s control over his own features slipped. He smiled back and passed her a plate bearing her sandwich, some strawberries, two tea cakes, and a slice of melon.

“Now that you’ve handed me something to bargain with, Miss Ingraham, we shall have a very enjoyable meal.”

Windham Family Duet is available in the following formats:

Windham Family Duet is part of the Republished Regencies, Windham series. The full series reading order is as follows: