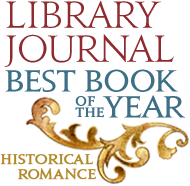 Book 2 in the Windham series

A weary soldier home from war…
…a beautiful neighbor who could be his salvation.

Even in the quiet countryside, Devlin St. Just, the oldest but illegitimate son of the Duke of Moreland, can find no peace. His idyllic estate is falling down from neglect and nightmares of war give him no rest. Then Devlin meets his new neighbor…

With her confident manner, the lovely Emmaline Farnum commands all of Devlin’s attention, even when he realizes the previous owner’s five-year-old daughter has become a nearly feral fixture on his property. Calling on Emmaline to become the girl’s governess, he soon learns that she can nurture him too, in ways no other woman ever has before…

Devlin St. Just, first born bastard son of the Duke of Moreland and newly minted Earl of Rosecroft, has just decided to travel south from his Yorkshire estate to visit his ducal family before winter sets in. He’ll leave behind young Winnie Farnum, the previous earl’s by-blow, and Winnie’s cousin and temporary governess, Emmie Farnum. Emmie has been trying to deny her attraction to St. Just, but even war weary, growling, and resentful of his title, St. Just has a charm and steadfastness Emmie is powerfully drawn to.

After the earl’s disconcerting announcement at dinner, Emmie successfully eluded him for the rest of the evening. She should have known her efforts were doomed. He breached all protocol that evening and knocked on her bedroom door once the house was quiet.

“My lord?” She opened the door halfway but did not invite him in.

“This won’t take long,” he said, holding his ground. She took the hint and stepped back, closing the door behind him. When he turned to face her, Emmie saw his green eyes go wide at the sight of her hair loose around her shoulders. Down and unbound. Not braided, bunned, or otherwise confined.

“You were brushing your hair,” he guessed. “Which means you were almost ready for bed. I apologize for intruding.” He wandered to her vanity and picked up a brush inlaid with ivory.

“I have been considering how best to apologize to you,” he said, winding the ribbon around his finger, “but I’m not sure exactly what label to put on my transgression.”

“And was an apology the purpose of this conversation?” she asked, not knowing where in the room to put herself. She wasn’t about to sit on the bed, and not on the fainting couch by the cold hearth either. She also didn’t want to sit at her vanity, not with him standing there, acquainting his big, tanned hands with her belongings.

“I’m not just here to apologize.” He smiled a slow, lazy smile at her. Not one of his company smiles, not a smile he’d give to Winnie or Lord Amery either. “Come sit, Emmie.” He patted the low back of the chair at her vanity. “You are uneasy, wondering when I’ll say something uncouth or alienate another neighbor. I regret that.” He patted the back of the chair again, and on dragging feet, Emmie crossed the room.

She seated herself and expected the earl to take the end of the fainting couch or to slouch against the mantel. He caught her completely off guard by standing behind her and drawing her hair over her shoulders.

“I miss doing this for my sisters,” he said, running the brush down the length of her hair, “and even for Her Grace when I was very young.”

“She raised you?” Emmie asked, knowing she should grab the brush from him.

“From the age of five on. You have utterly glorious hair. Winnie will be the envy of her peers if she ends up with hair like this.” He drew a fat coil up to his nose and inhaled, then let it drop and resumed his brushing.

“I interrupted you. It’s only fair I should perform the task I disturbed. Besides, I wanted to talk to you about this trip Douglas has proposed.”

Emmie rolled her eyes. “The one he proposed at the dinner table. In front of Winnie. What was he thinking?”

“He was thinking”—the earl kept up a slow, steady sweep of the brush—“to alert you to the possibility and to give you a chance to comment on it. But you did not.”

“You said nothing that told me what you think of the idea,” he remonstrated. “One braid or two?” 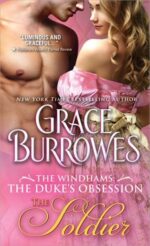 “One. You should do as you please,” she said, trying to rouse her brain to focus on the conversation.

“I hadn’t planned on traveling south again until spring, perhaps when Gayle and Anna’s child has arrived.” He fell silent as the brush found a knot in the heavy abundance of her hair.

“So why go now?” Emmie asked when she ought to be telling him to go and stay away until spring.

“I’m not sure.” He eased the brush through the knot. “I miss my family, for one thing. I didn’t think I would. I spent much of the spring in Westhaven’s household, and I saw a fair amount of Her Grace and my father then, too.”

“But not your sisters, and you have yet to meet Rose, and your father is recovering from a heart seizure.”

“He is. Easily, if my brothers’ missives can be trusted. But what of Winnie? She is my family now, too, and I won’t go if you think it would upset her too much. She’s had a great deal of upheaval in her life, and I would not add to it.”

“Winnie has given you her blessing.” Emmie steeled herself against a lassitude that was making it difficult to keep her eyes open. “And Winnie is not a creature who ignores her own preferences. Just for God’s sake do not fail to return, or I won’t answer for the consequences.”

She sat in her chair, stock still, and watched in the mirror as he hunkered behind her chair and pushed her hair to the side, exposing the side of her neck.

“I told myself,” he murmured, his thumb caressing the spot just below her ear, “I could behave if I had to track you to your lair tonight. I told myself that lie and I believed it.”

He leaned in slowly and pressed his open mouth to the juncture of her shoulder and her neck. His breath fanned over her skin, and Emmie had to close her eyes against the sight of him in her mirror. He rose, but only to let his hands drift down her arms and back up.

“You aren’t stopping me, Emmie,” he whispered.

“I will,” she said, hoping it was true. But his long fingers were busy with the ties at her throat, and she felt her night rail fall open as he bit her earlobe. Soon, she thought, soon I will stop him, but not just…

“Devlin, or St. Just, or my love, but not the bloody damned title.” He shifted so he was kneeling before her and threaded his hand through her hair at her nape.

Another kiss, Emmie thought, her heart kicking into a gallop. Just this once more, and then I’ll be good.

He made it a feast, that one kiss, by grazing his nose all over her jaw, her cheeks, her brow. Everywhere, he inhaled her scent and teased her with his own. She tried to capture his mouth, but he evaded such headlong behavior.

He growled, a sound that held amusement and satisfaction, but he didn’t capitulate to her demands until he’d undone the ties to her nightgown. Not until he fused his mouth to hers did he ease the material apart, though, and then he let his hand drop to her lap, leaving Emmy to focus on the way he plundered her mouth, stole her wits, and sent her best intentions and common sense begging down the lane.

The Soldier is available in the following formats: 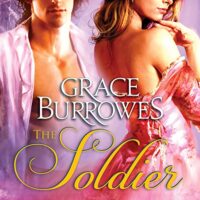 The Soldier is Book 2 in the Windham series. The full series reading order is as follows: