Book 5 in the Windham series

Maggie Windham is the Duke of Moreland’s eldest, but illegitimate, daughter. She leads a retiring, dignified life… until stolen letters bring Maggie to investigator Benjamin Hazlit’s door. When it becomes clear Maggie is being blackmailed, Benjamin becomes determined to find not just the letters, but the way to Maggie’s heart.

When Benjamin Hazlit shows up to take Maggie Windham out to Richmond for a picnic, Maggie her investigator and erstwhile suitor that their dealings must be at an end. Hazlit doesn’t like this decision one bit, and holds Maggie to joining him on their outing so he might regroup and strategize…

Maggie glanced around at the park in all its early spring beauty—for the day was genuinely an exponent of early spring—took a lungful of fresh air, and told herself it was the perfect day for a broken heart.

As a girl, she’d dreamed of one day having a husband and children, a home of her own and a family of her own—a real family. It was the same, mundane dream every girl from good family felt entitled to have, and it was a wonderful dream.

And then she’d made her come out and shortly thereafter realized that simple, solid, mundane dream was not to be hers—not ever.

Benjamin, the Earl of Hazelton, had asked for her hand in marriage, and it hurt with the sweet, piercing ache of a wish that would never come true—a wish so dear she’d been unwilling to admit to herself she still held it in her heart.

A husband she could respect and care for, children, a beautiful estate far from gossip and intrigue, passion such as she’d only glimpsed recently, and the illusion of safety and peace.

“Chicken or roasted beef?” Benjamin knelt by a huge wicker hamper, rummaging in its depth as he spoke. “This is a momentous decision, as it determines which bottle of wine I open first. And we’ve forced strawberries.” He glanced up at her. “I will wrestle you for the strawberries, be warned.”

He went on like that, teasing with a grave face, feeding her all but three of those strawberries, and plying her with a fruity, sweet white wine between every bite of chicken. When the meal was finished, Maggie realized the coach was gone, taking grooms, footmen, and horses with it.

“I’m alone with you, Benjamin, and you’ve been suspiciously charming for the past hour. What are you about?”

“I’m not sure.” He started repacking the hamper. “Enjoying the condemned man’s last meal, maybe. Why won’t you marry me, Maggie? The real reason, not the polite excuse.”

Because he was pretending to be busy with the plates and bottles and glasses, Maggie had a moment to study him. As he efficiently put away the detritus of their meal, she knew he was listening to her, even watching her.

She could not offer him explanations, and after today, gentleman that he was, he’d not ask for them. He’d resume his busy life, one foot in an earldom, another in the shadows of Mayfair, missing his home, fretting over his sisters, and politely nodding at Maggie Windham on the street.

The ache in her throat that had started with his proposal threatened to choke her.

“Will you kiss me good-bye, Benjamin?”

He sat back on his heels, the last bottle of wine in his hand, his shirt sleeves luffing gently in the spring breeze. Without answering, he put the bottle in the hamper and closed the wicker flaps. He met her gaze, his eyes a peculiar amber hue in the dappled shade. “Yes. I will kiss you, Maggie Windham.”

He crawled the few feet across the blanket, looking like some dark jungle cat on the scent of prey. Maggie sat, knees drawn to her chest, until Benjamin was nose to nose with her.

Lady Maggie’s Secret Scandal is available in the following formats: 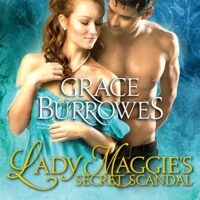 Lady Maggie’s Secret Scandal is Book 5 in the Windham series. The full series reading order is as follows: