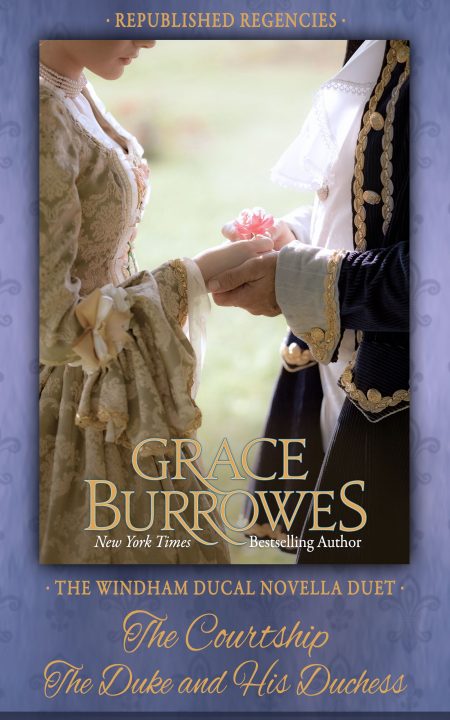 A novella in the Republished Regencies, Windham series

THE COURTSHIP–Percival Windham, the Moreland spare, is politely fending off matchmakers and merry widows alike as he endures three interminable weeks at a summer house party. Esther Himmelfarb is trudging through the same three weeks at the same house party, trying to keep a handsome cousin out of trouble while she dodges proposals from gouty barons, and propositions from upstart peers. Percival is far above her touch, Esther is not at all who Percy had in mind, but some things are meant to be!

THE DUKE AND HIS DUCHESS–In this second prequel novella to the popular Windham series, Percival and Esther Windham face the tumultuous and bittersweet first years of marriage. Between an aging patriarch, a full nursery, money troubles, and political difficulties, true love is slipping from sight. Then Percival’s past delivers a double helping of trouble at precisely the wrong time, and Percival and Esther must decide whether their marriage becomes an alliance of convenience or an enduring love story.

Esther Himmelfarb’s cousin Michael pulls her aside at Lady Morrisette’s houseparty to interrogate her regarding prospective brides. In the course of their discussion, Esther learns that the man she’s hoping will view her in the same light has departed the premises altogether.

“You look as tired as I feel.” Michael tugged on Esther’s sleeve and led her to a dusty little room full of guns, game bags, and other hunting accoutrements. “Are you getting any rest at all?”

Esther glanced around, her gaze landing on a stag’s head mounted on the opposite wall. The animal’s glass eyes stared at a hare, which the taxidermist’s art had frozen leaping from a set of quarter shelves in a corner.

Michael’s gaze narrowed as he pushed the door closed with a booted foot. “I’m trying to express concern for you, and your response is to nag? Even a cousin finds that tiresome behavior in a female.”

Was he concerned? Esther gave herself leave to doubt that. “Lady Morrisette remarked last night after dinner that she will make it a point to oppose you at whist, because she’s sure to increase her pin money that way.”

“Women’s gossip. She opposes me at whist so she might make free with her hands on my person under the table, while our partners likely do the same across the table.”

Esther thought back to the previous evening, when Sir Jasper and Charlotte Pankhurst had completed the foursome at Michael’s table.

“You might well be right, but, Michael, I am worried for you. These people are above our strata. We’re tolerated here to make up the numbers, and they are not our friends. Your folly would provoke their amused scorn, not their sympathy.”

He crossed his arms while his expression became superior. “And what of you, Esther Himmelfarb? Lurking in gardens with a ducal spare? That’s more than a bit ambitious, I’d say, even for an earl’s granddaughter.”

An arrangement of silver hunting flasks sat on the quarter shelf below the leaping hare. The flasks were going a bit tarnished, but they’d make satisfying missiles fired at Michael’s head.

“Were you spying on me, Michael?”

“I was taking a bit of air, Cousin, and heard voices on the other side of the garden wall. Percival St. Stephens Joachim Windham was getting quite friendly with you.”

He’d forgotten a name—Tiberius. Thank God the wall had been high and solid.

“I can visit with whom I please, Michael, and regardless of how I’m spending what little spare time I have here, you are supposed to be courting the ladies, not financial ruin.”

Michael apparently decided on a tactical retreat. “What can you tell me about Herodia Bellamy?”

And this was likely the point of Michael’s “concern.” He was losing badly at cards, and instead of browsing the available brides himself, he expected Esther to do his scouting for him.

His smile was quick and genuine. “You sound exactly like Uncle Jacob. Marriage can solve both. The best families have known this for generations and prosper as a result. Tell me about the Bellamy girl.”

There was no reason not to, though Esther eyed the flasks with longing. They would make such a loud, satisfying crash pitched against the old speckled mirror above the mantel.

“Herodia is a trifle too smart for her own good. She’s bored silly but knows better than to get tangled up in anything truly disgraceful. Engage her mind, and she’ll notice you.” 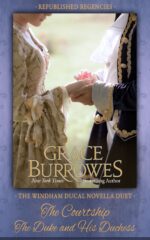 “I’d rather engage her mind than spend my days complimenting her hair bows.” Michael looked thoughtful. “I’m also hoping I might make progress with the Needmore heiress now that the Windham brothers have gone larking into Town.”

Esther barely refrained from clutching her cousin’s arm to wring further details from him. “I wasn’t aware they’d departed from the gathering And her name is Needham.”

Michael began a perambulation of the room, inspecting the hunting paraphernalia and trophies as he wandered. “Lord Percy is partial to mistresses with flaming red hair and lush proportions; at last report he had at least two of that description meeting his needs in Town. Lord Tony probably went along for similar entertainments, or perhaps they share—though I ought not to offer such speculation in your company. Where do you suppose Lord Morrisette killed this thing?”

A man would do that—leap in conversation from mistresses to hunting trophies and be oblivious to the non sequitur. “It’s a skunk. Perhaps he purchased it from somebody who’s hunted in the New World.”

The animal was probably very pretty when alive. Lush black and white fur ended in a graceful plume of a tail, and yet in death, the beast’s eyes bore the same blank stare as every other prize in the room.

“Well, I’m off to hunt a bride, or perhaps some sport more entertaining than dodging Lady Morrisette’s overtures.” He paused by the door and regarded Esther for a moment. “You’re too decent for a gathering like this. I’m surprised Aunt and Uncle let you attend.”

“I’m nominally under Lady Pott’s wing, when she’s awake. You’d best be going lest somebody remark our tête-à-tête, but I truly wish you’d limit yourself to farthing points.” Esther wished as well she could tell her numbskull cousin she’d been “permitted” to attend mostly to keep an eye on him.

Michael pursed his lips in a sulky pout. “Schoolboys play for farthing points.”

When the door clicked softly closed behind him, Esther informed the hare, the skunk, the stag’s head, and a four-foot-long silver-and-black snake twined around a limb above the mantel, “Even schoolboys know their debts of honor must be paid.”

The Windham Ducal Duet is available in the following formats:

The Windham Ducal Duet is a novella in the Republished Regencies, Windham series. The full series reading order is as follows: