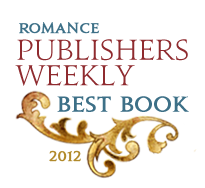 Book 1 in the Windham series

Anna Seaton is a diligent, superbly competent housekeeper who in addition has all the accomplishments of a well bred, well educated lady. She’s also beautiful and considerably younger than most other women similarly situated, leaving her employer, Gayle Windham, the Earl of Westhaven, with a puzzle. As Anna and Gayle grow closer, overcoming differences in station, personality, and expectations, Anna’s secrets threaten to bring the orderly earl’s life crashing down—and he doesn’t know how he’ll protect the woman he’s come to love from the problems she’s been outrunning for years.

Weighed down by responsibilities, and determined to avoid the summer round of country house parties and matchmaking mamas, Gayle Windham, Earl of Westhaven, decides to summer in London. He becomes engrossed in his lovely but secretive housekeeper, who would make the perfect Duchess. As housekeeper, it’s Anna Seaton’s job to deal with the petty maladies and wounds in the household, even when her patient is Westhaven himself….

Grabbing her medical supplies, Anna went in search of her quarry, hoping to find him where he usually was at this pleasant hour of the early evening, out on his balcony.

He lounged on his wicker chaise in lordly splendor, his waistcoat slung over the back of the chair, cravat folded tidily over that, his shirt open at the throat, and his cuffs rolled back.

“Your lordship?” Anna waited for his permission to step from his bedroom, feeling absurd for doing it and abruptly self-conscious.

“Mrs. Seaton,” he drawled, glancing up at her. “You’ve come to poke at my injured self. Does nothing deter you from the conscientious prosecution of your duties?”

“Craven evasion,” she replied, stepping out onto the balcony. “As when my patient disappears at first light, not to be seen until tea time, and then only in the company of his protective little brother.”

“Val is protective of me?” Westhaven scowled as he eased forward to the end of the chaise, then dragged his shirt over his head and turned his back to her. “I suppose he is at that, though he knows I’d bite his head off were he to imply I need protection. Jesus Christ, that still stings.”

“We all need protection from time to time,” she said, dabbing gently at his back with arnica. “Your bruises are truly magnificent, my lord. They will heal more quickly if you don’t duck out of a morning—and skip your breakfast.”

“It’s too hot to ride later in the day, at least at the pace I prefer.” He winced again as she went at the second large laceration.

“You shouldn’t be out riding hell-bent, your lordship. Your injuries do not need the abuse, and I can see where you’ve pulled this cut open along this edge.” She drew a chiding finger along the bottom seam of a laceration. “What if you were unseated, and no one else about in the dawn’s early light?”

“So you would come along to protect me?” he challenged lazily. She began to redress his back.

“Somebody should,” she muttered, focused on the purple, green, and mottled brown skin surrounding the two mean gashes on his back.

The earl frowned in thought. “In truth, I am in need of somebody to protect. I fired my mistress today.”

“My lord!” She was abruptly scowling at him nineteen to the dozen, as much disapproval as she dared show, short of jeopardizing her position outright.

“There is always gossip,” he quoted her sardonically, “below stairs.”

She pursed her lips. “Gossip and blatant disclosure are not the same thing. Though in this heat, why anyone would…”

She broke off, mortified at what had been about to come out of her mouth.

“Oh, none of that, Mrs. Seaton.” The earl’s smile became devilish. “In this heat?”

“Never mind, my lord.” She wetted her cloth with arnica again and gently tucked his head against her waist. “This one is looking surprisingly tidy. Hold still.”

“I have a thick skull,” he said from her waist. And now that she was done with his back, came the part he always tolerated almost docilely. She sifted her fingers carefully through his hair and braced him this way, his crown snug against her body, the better to tend his scalp.

And if his hair was the silkiest thing she’d ever had the pleasure to drift her fingers over, well, that was hardly the earl’s fault, was it?

He should have tended to himself when he didn’t complete matters at Elise’s. Why else would he be baiting his housekeeper, a virtuous and supremely competent woman? She was done with her arnica and back to exploring the area around his scalp wound with careful fingers.

“I don’t understand why you haven’t more swelling here.” She feathered his hair away from the scalp wound. “Head wounds are notoriously difficult, but you seem to be coming along wonderfully.”

“So we can dispense with this nonsense?” He reluctantly sat back and waved his hand at her linen and tincture.

“Another two days, I think.” She put the cap back on the bottle. “Why is it so difficult for you to submit to basic care, my lord? Do you relish being stiff and scarred?”

“I do not particularly care what the appearance of my back is, Mrs. Seaton. Ever since my brother took several years to die of consumption, I have had an abiding disgust of all things medical.”

“I’m sorry.” She looked instantly appalled. “I had no idea, my lord.”

“Most people don’t,” Westhaven said. “If you’ve never seen anyone go that way, you don’t fully comprehend the horror of it. And all the while, there were medical vultures circling, bleeding, poking at him, prescribing useless nostrums. He tolerated it, because it created a fiction of hope that comforted my parents even as it tortured him.”

He fell silent then stood and went to the railing to stare out at the lush evening sunlight falling over his back gardens.

“And then late this winter, my stubborn father had to go riding to hounds in a weeklong downpour, only to come home with a raging lung fever. The leeches went at him, his personal physicians doing nothing more than drinking his brandy and letting his blood. When he was too weak to argue with me, those idiots were thrown out, but they came damned close to costing me my father.”

“I’m sorry,” she said again, turning to stand beside him, laying a hand on his back. He heard her sharp intake of breath as she realized her error—his shirt was still off. He didn’t move off, though, but waited to see how she’d manage. Her hand was comforting, and without him willing it, his own slid along her waist and drew her against his side.

She remained facing the gardens, her expression impassive, her breath moving in a measured rhythm, her hand resting on his back as if it had arrived there despite her complete indifference to him as a person. Slowly, he relaxed, sensing her innate decency had, for just a few moments, trumped her notions of propriety, class distinction, and personal rectitude.

She offered comfort, he decided. Just comfort, for him, upon his recounting some very dark moments and his frustration and helplessness in those moments.

But what about for her?

He turned her to face him, brought her slowly against his body, and rested his cheek against her temple.

Just that, but it changed the tenor of the moment from gestures of comfort to the embrace of a man and a woman. His arms draped over her shoulders while hers looped at his naked waist, even as he told himself to end this folly immediately, or she’d have grounds for believing he trifled with the help after all.

She didn’t end it. She stood in the loose circle of his arms, letting him positively wallow in the clean summery scent of her, the soft curves fitting him in all the right places. He urged her with patient strokes of his hands on her back to rest more fully against him, to give him her weight. He wasn’t even aroused, he realized, he was just…consoled.

When he finally did step back, he placed a single finger softly against her lips to stop her from the admonitory and apologetic stammerings no doubt damming up behind her conscience.

“None of that.” He shook his head, his expression solemn. “This wasn’t on my list either, Anna Seaton.”

She didn’t tarry to find out if he would say more, but shook her head in dismay, no curtsy, no resounding whack to his cheek, no offer of resignation. She left him, heir to the dukedom, standing half dressed, bruised, and alone on his private balcony.

The Heir is available in the following formats: 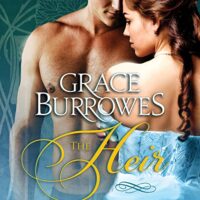 The Heir is Book 1 in the Windham series. The full series reading order is as follows: