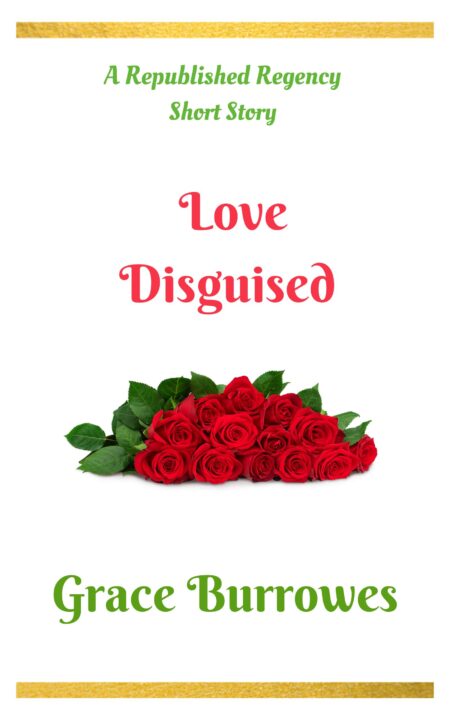 When looking for true love, sometimes it helps to wear a disguise!

Rupert, Earl of Esterly, kits himself out as a footman, hoping to avoid the matchmakers’ notice at a masquerade. His lordship catches the eye, not of the proper lady he’s supposed to start courting, but of Mary, a chamber maid who has no use for titled men. He’s not what she thinks he is, but then, she’s not what she appears to be either!

(This story was originally published in the anthology, A Midsummer Night’s Romance.)

“You there, boy! Fetch a guest a glass of punch. Fetch us a tray of glasses, in fact.” Lord Ellery Tilghmanton gestured to the toadies sharing his card table. “Fleecing the innocent is thirsty work, eh?” This observation provoked laughter from Tilghmanton’s cronies, who were in no wise innocent.

Rupert Silvester Halifax Dean, eighth Earl of Esterly, hadn’t been called boy since he’d left Eton for Oxford half a lifetime ago. He bowed from the waist of his six-foot-three-inch frame nonetheless and withdrew from the cardroom as any proper footman would have.

“Boy,” he muttered, returning to the gallery. “Boy. Step into the ring with me at Jackson’s, Tilghmanton, and I will show you some boyish enthusiasm you won’t soon forget.”

Rupert’s threat was lost under the noise of a hundred conversations coming from Lady Whitwell’s ballroom. Violins tuned up as well, suggesting the supper break would soon conclude, and thank God for that, for this damned masquerade needed to end.

“I don’t recognize your livery.” A matron in a toga and gilt mask planted herself directly in Rupert’s path. “It’s similar to the Whitwell ensemble and fits you very well, young man.”

Even at a distance of four feet, Rupert could smell the spirits on her breath. “Thank you, ma’am. I’m on loan for the evening. If you’ll excuse me.”

She looked him up and down, her gaze putting Rupert in mind of the bidders at Tatt’s eyeing up a particularly promising stud colt.

“You could lend yourself to a citizen of Rome for the next fifteen minutes. Enjoy a nice little vale, shall we say?” She gave the word its Latin pronunciation, which would have translated to farewell.

And few footmen would comprehend her vulgar play on words. “Ma’am, please do excuse me. I must return to the kitchen.” Rupert strode off with unseemly haste for a peer of the realm, and resumed searching for his sister. The suggestion to attend Lady Whitwell’s masquerade costumed as a footman had been Helen’s. A lark she’d said, a joke, the most original disguise a peer could adopt.

No one would ever guess, she’d claimed, and Rupert could enjoy a last outing in good company before surrendering his status as an unattached bachelor.

Rupert’s mind did not run to frivolous matters such as what costume to wear to a masquerade. He’d thus acceded to Helen’s choice, and had spent the past three hours regretting his decision. Despite the silk mask Helen had tied about his head, he had been taken for an actual, working footman since descending the ballroom’s stairs. Helen had put him in livery nearly the same shade of mulberry that the Whitwell staff wore.

A joke, Helen had said. Ha. Ha. Rupert had given up trying to explain that because this gathering was—lest anybody forget—a masquerade he was attired as a footman but not a footman in truth.

A white-haired underbutler bustled down the gallery. “Don’t just stand there, ye great looby! Back to the punch bowl. We’ve champagne to serve. The dancing will soon resume and then we can start cleaning up the supper plates. And take off that silly mask.”

Though where exactly were the servants’ stairs? He’d been a guest at the Whitwell’s annual masquerade on far too many occasions, each one more tedious than the last, but he’d never had reason to wonder exactly how the buffet and punch and champagne arrived to the public rooms.

A footman in house livery hurried past, an empty tray in his hands. Rupert fell in step behind him, but the fellow made straight for the punch bowl where he arranged a dozen glasses on his tray.

The footman ladling out the punch passed him the last glass. “Bloody nobs running you ragged?” he muttered in Cockney accents.

“Come on, then,” the fellow with the ladle said, waving it at Rupert. “That lot in the cardroom would drain the Thames if it flowed with spirits. You new here?”

Rupert commenced setting glasses of punch on his tray. “I’m borrowed from a friend of Lady Whitwell’s. Where would I find the passage to the kitchen?”

“Past the card room. A blind doorway hidden across from the pier glass. You’re only taking six glasses?” 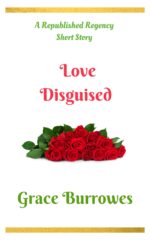 “Six will do.” Six was six too many when Rupert had never aspired to a waiter’s skills. He withdrew to the gallery and spied an empty alcove, the perfect place to abandon six glasses of champagne.

“Lurking in the shadows, are you?”

Jupiter help him, the Roman matron had followed him right into the alcove.

“Waiting for another guest?” she purred. “Was that why you were so coy?” She ran her palm over his person in a most intimate location, but because Rupert held a tray of glasses, he could not stop her.

“My, my,” she went on. “Why didn’t I think to come disguised as one of those naughty French maids?” She boldly groped Rupert, just as he realized he knew this Roman matron. Hippolyta Berenson was one of the nastiest gossips in Mayfair, quick to spread any rumor that reflected ill on another.

An earl could wrench away, deliver the cut direct, and ruin her without a word. But an earl who abhorred scandal and intrigue, who simply wanted to endure the evening in peace, did not have that option.

Particularly when he was attired as a blasted footman.

“Madam, you flatter me,” he said, stepping back, “but I need my post, and my employer would sack me without a character if I dallied when there was so much work to be done.” He set the tray on the nearest windowsill and fled the Roman empire without a bow.

Download the rest of Love Disguised from Grace’s web store!

Love Disguised (A Previously Published Regency Short Story) is part of the Republished Regencies series. The full series reading order is as follows: