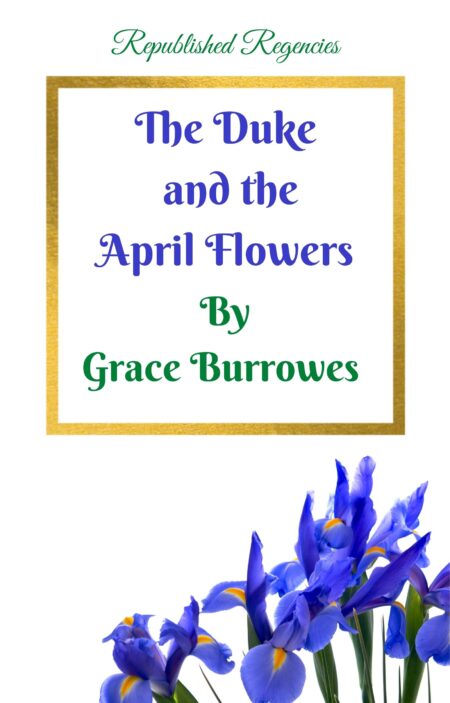 The Duke and the April Flowers

Henning, Duke of Clonmere must marry one of the Earl of Falmouth’s three giggling younger daughters, but Lady Iris — Falmouth’s oldest, who is not at all inclined to giggling — catches Clonmere’s eye, and his heart!

NOTE: This story originally appeared in the (now de-published) anthology, Dukes by the Dozen. At present, it’s available exclusively through the web store as a free download.

The Duke and the April Flowers:

“Your sainted papa promised you’d choose your duchess from among my daughters, Your Grace. They are the loveliest trio of young ladies ever to waltz through Mayfair’s ballrooms, so you needn’t bother fuming about your fate. Polite society will feel not even a scintilla of pity for you.”

The Earl of Falmouth, father to that trio of young ladies, bent to sniff a pot of daffodils. Henning, Duke of Clonmere, barely restrained himself from shoving his lordship’s face into the flowers.

“The pity,” Clonmere said, “should be reserved for a woman yoked to a partner who comes to the union unwillingly.”

Falmouth was a lean, white-haired fellow with an easy smile and shrewd blue eyes. Clonmere’s father had claimed that as a boy at public school, the earl had befriended every ducal son he’d met, and let not a one of them forget it.

Amid a back garden coming into its full spring glory, Falmouth looked benign, just as his daughters probably looked demure and biddable.

Clonmere had a mother and sisters and female cousins and aunties. He knew better.

“You are young,” Falmouth said. “You might come to the altar reluctantly, but you’ll come to the marriage bed readily enough. If you’re anything like your father—”

Clonmere rose from the bench rather than let that reminiscence blunder into the light of day. “I am nothing like the late duke.” For one moment, Clonmere loomed over the older man, which was not well done of him. Six feet and three inches of duke should be too well mannered to loom over even a schemer like Falmouth.

The earl had turned one old letter into a binding promise of marriage. Papa had probably sent half a dozen such letters, drunken, sentimental maunderings that posited a desire to see “my dear boy with one of your sweet, lovely girls at his side…”

Fortunately for Clonmere, bigamy was still a felony under English law.

“You are more your father’s son than you know,” Falmouth said, pushing to his feet. “You think he engaged in one mad lark after another because he was bored and self-absorbed. In his way, he was as stubborn as you’d like to be. All that wagering and wenching was a refusal to be guided by wiser heads. You’re tempted to err in the very same direction, to ignore your father’s wishes out of simple pique.”

Clonmere was tempted to leave for Portugal, where the spring sunshine was wonderfully hot, not this thin English light that the merest breeze could turn chilly.

But he’d spent the past five years in Portugal, and Mama had put her foot down. Clonmere was stubborn, had a good opinion of himself, and had invested in a few risky ventures, but he wasn’t stupid enough to thwart the duchess any longer on the topic of the ducal succession.

“A desire for marital harmony is the farthest thing from pique,” Clonmere said, striding down the gravel path. “As a father, you should want at least that for your offspring.”

Falmouth chortled, the condescension in his mirth scraping Clonmere’s last nerve. “My daughters are paragons, Your Grace, but they’re also sensible. Give them a tiara, give them the opportunity to count a duke among their in-laws, and they’ll be more than content.”

Falmouth would be content, in other words, because he would have scored a social coup.

“How old are they?” Clonmere asked, regretting the question as soon he’d spoken.

“Lily is twenty-three, Holly and Hyacinth are twenty-one. Old enough to be sensible, young enough to present you with plenty of sons.”

Portugal wasn’t far enough way. Peru wasn’t far enough away. The ladies might indeed be paragons, diamonds, incomparables and all that other twaddle applied to pretty women with titled families, but Clonmere was horrified to think of having Falmouth as a father-in-law.

Women were not livestock, and children were not proof of virility. They were noisy, expensive, messy, and loud, and one heir and one spare were all that duty required of anybody. And yet, duty did require that much. Clonmere was thirty-two, neither of his younger brothers had married, and Mama’s patience was at an end.

“I’m willing to meet your daughters, Falmouth, but I won’t have them paraded before me like fillies at Tatts. I’ll send you a list of the social engagements I’ll attend over the next few weeks, and you can make introductions to me and to my mother in the normal course.” 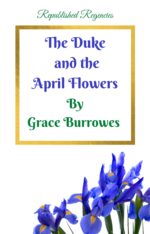 Falmouth plucked a sprig of rosemary from the border beside the garden gate. “You’ll rely on your dear mother’s judgment in this matter?”

“I’ve agreed to be introduced to your daughters, my lord, nothing more. There is no matter, there is no engagement, there might well be no proposal. If you indicate otherwise to your daughters, I’ll know it, and find myself forced to attend to pressing business in the Antipodes.”

The piney scent of rosemary filled the air, supposedly an aid to memory. Clonmere might have already met Falmouth’s paragons, but if so, they’d made no impression on him.

Being a duke, particularly a wealthy, single duke, required the ability to make small talk while considering whether to plant the Surrey estate in flowers or corn, and to play cards while deciding which eager young cleric should be awarded the living in Derbyshire.

Clonmere might have stood up with every blossom in Falmouth’s bouquet at some point. At least one of them had been out before he’d gone to Portugal. As he took his leave of Falmouth, he had the sense that he’d neglected to ask some important question or establish some salient fact…

The niggling, where-are-my-spectacles feeling stayed with Clonmere on the short walk to his townhouse. He kept mostly to the alleys, because the day was sunny, and the carriage parade would start within the hour. Bad enough he would be waltzed off his feet for the next month; but then… Falmouth had only the three daughters, and most hostesses only planned two waltzes per evening.

Perhaps the next month wouldn’t be that taxing after all.

The story is available exclusively from Grace’s Bookstore FOR FREE!

The Duke and the April Flowers is available in the following formats:

Sorry, this story is too small to be offered by itself in print.

The Duke and the April Flowers is part of the Republished Regencies series. The full series reading order is as follows: