No Other Duke Will Do

Book 3 in the Windham Brides series

Julian, Duke of Haverford, is barely keeping his handsome head above water amid a sea of inherited debts. His sister, Lady Glenys, decides to throw a house party Julian can ill afford in hopes of finding an heiress for him to marry. Julian tries to turn this disaster into opportunity by inviting every well-heeled bachelor in the realm, because Lady Glenys is also in want of a spouse.

Elizabeth Windham is among the guests at the Haverford house party, though her goal is to elude matchmaking from any quarter. Julian and Elizabeth are attracted, however, despite meddling siblings, financial woes, and gossips lurking behind every potted palm. Just as Julian and Elizabeth realize that they can snatch true love from the jaws of duty, Julian’s difficulties become ruinous. Which will it be? True love or true disaster?

No Other Duke Will Do:

Julian, His Grace of Haverford, and Miss Elizabeth Windham have had a difference of opinion regarding the blessings of the wedded state. Haverford has, despite all intentions to the contrary, ended up arguing with a lady, and must now make amends…. Or something.

Elizabeth Windham was a quiet presence at any meal, a polite conversationalist while waiting to take her turn with a bow and arrow, a dutiful companion to her aunt—and she was a walking, talking, smiling liar.

Were all women this good at dissembling? For the gracious, unassuming Miss Windham hid volumes worth of indignation and passion beneath her quiet exterior. If Julian were a betting man, he’d put money on lending libraries appearing in every village in the realm within ten years.

She had intrigued him with her demure composure, while this hidden ferocity fascinated him.

Miss Windham occupied the center of the room, dignity and ire crackling about her. Julian had offended a lady, and that was not an acceptable way to end his day—or hers.

“Madam, you place before me an impossibility. How can I have a pleasant evening, when I have so clearly upset you? At least finish your serving of cordial.”

She likely wanted to dash her drink in Julian’s face, but faultless manners were part of her duplicity.

Miss Windham retrieved her glass from him and tossed back the contents in one gulp, then began coughing. Julian dared not laugh, but he did presume to lead her to the rocking chair.

“That was foolishness,” he said. “That was rank, reckless foolishness and a waste of Lady Glenys’s favorite recipe. If you wish to become inebriated, then you keep a patent remedy in good supply, and when nobody is about, tipple to your—”

“Haverford, cease instructing me, or I will strike a blow where you will never forget it.”

She apparently referred—in deadly earnest and at close quarters—to his tallywags, or possibly to his pride.

Julian took a step back. “I apologize.” A safe place to start, though inadequate. “Whatever fellow or fellows led you to have such a dim view of marriage, or its intimate joys, or of life in general, did you a disservice.”

He passed her his handkerchief and realized too late it was less than pristine.

“I’ve considered that,” Miss Windham said, finding a clean corner and dabbing at her eyes. “I’ve considered that I chose poorly when deciding to cross the bounds of strict propriety—though how is a woman to develop a sense for such matters? All men adopt fine manners, charm, and good humor when they’re in the ballroom. That apparently means nothing in the bedroom.”

“Maybe I chose poorly,” she went on more softly, “both times.”

Julian drew up the hassock and planted himself upon it, lest her revelations lay him out on the carpet. “You should not be telling me these things, but I beg you, if you have a scintilla of mercy in your soul, do not mention names.”

“Why not? Surely you don’t care if some baron—”

He put two fingers to her lips, and glowered as old Offa must have glowered at the barbarians to the east of his dyke, then he withdrew his hand before the texture of her mouth became too intriguing.

“—you cannot care who among your peers is a bad kisser,” Miss Windham said, “or doesn’t bother with kissing at all.”

St. David, pray for me. “If I know their names, I’d have to call them out. Two duels would be hard to keep quiet. Allermain might get word I’ve neglected him, and three duels is the outside of too much.”

“Allermain will spend at least the next year in Paris. Why would you call out men who’d merely accommodated my wishes?” 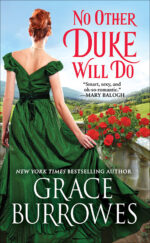 The hour was late, Julian was tired, and his mind refused to sort through the demands of honor when Miss Windham’s hurt feelings obscured all logic from his view. No plan he might have concocted, no list or ledger, would have prepared him to have the conversation he was having with her now.

“Those men disappointed you. I’d call them out for disappointing you. Let’s leave it at that. A gentleman might dally discreetly, as might a lady under very limited circumstances, but even a dalliance should be undertaken with a certain respect for one’s lover.”

“I suspected I’d chosen a pair of rotters. What foul luck. Might have I have a bit more cordial?”

Julian poured her a generous portion and resumed his place on the hassock. “Did either of these varlets offer marriage?” And had they broken her heart or merely disappointed her?

“I had an understanding with Theodore, but then his mother’s god-daughter turned up in immediate need of a husband. She was pretty, four years younger than I, and her settlements included a lovely estate in Hampshire. He was very sorry, but duty compelled him to aid a damsel in distress.”

He was sorry, indeed. Snippets of gossip connected in Haverford’s head. Teddy Morningside was the younger son of an earl, a bad card player, and a good dancer. He’d dropped out of the social scene about five years ago, though he was rumored to be filling his nursery in Hampshire.

“You’re better off without a man whose honor is so easily obliterated by coin.”

“I am, and he couldn’t kiss worth a bent farthing.”

Miss Windham took another sip of her cordial. “With the baron, I yielded to impulse. He said he had as well, but he’d neglected to tell me of a fiancée kicking her heels in County Mayo. He didn’t kiss at all.”

“Irish barons are always a risky bet. You can’t let those two encounters color your whole perception of the male gender, or of marriage.”

“They were experienced men, Your Grace. I chose them knowing they’d bring at least that asset to the proceedings.”

Her logic was faultless, and her lips had been very soft against Julian’s fingertips.

“I have years of experience being a duke. That doesn’t mean I have any talent for it. I wish you the joy of your lending library scheme, and I’m sure you’ll benefit many a village with it. On behalf of my gender, however, I’d like to offer one gesture by way of apology, or perhaps as a counterexample to your theories regarding marital pleasures.”

Julian took her drink from her hand and ignored the voice in his head that sounded like Lord Radnor delivering a lecture.

“A counterexample sounds promising, Your Grace.”

“Julian. If we’re to be sharing counterexamples, you must call me Julian.”

He cradled Miss Windham’s jaw against his palm, lest she mistake his intent. When he was confident that he had her consent, and her attention, he kissed her.

Order your copy of No Other Duke Will Do!

No Other Duke Will Do is available in the following formats:

This book is also available in: French Italian 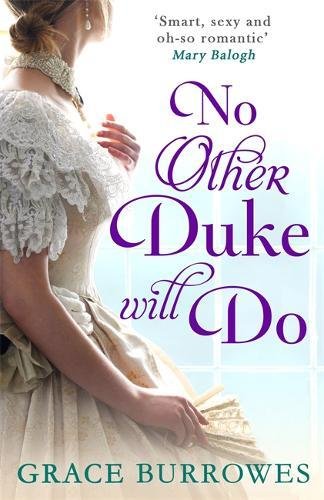 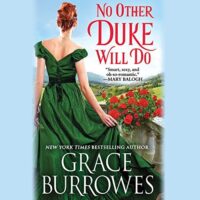 No Other Duke Will Do is Book 3 in the Windham Brides series. The full series reading order is as follows: