In the spirit of transparency for which I’m probably never going to be famous, I confess there are days when I play a LOT of solitaire, hearts, and free cell. I’m convinced social media were invented by writers waiting at the Idea Bus Station for Inspiration to arrive. It’s a crowded bench. If I have to spend time there (and I do) then I try to spend it in the company of a word book.

One of my favorite word books is Reverse Dictionary by Theodore M. Bernstein. (Quadrangle, The New York Times Book Co., 1975). I’ve had this tome since it was given to me in high school. It made all those college moves with me, waited for me while I knocked around Europe for a few months, and made the many young adult moves with me too.

Reverse Dictionary is for when you can’t think of the word, but it’s what you call it when…. The most helpful feature of the book, for me, is its listing of “Creature Terms.” A group of swans is herd or wedge, the male swan is a cob, the female a pen, and the young a cygnet. A group of ravens is an unkindness, a group of rhinoceroses a crash (I’ll bet it is), a group of starlings a chattering, and storks a mustering.  Gulls come in colonies, herons in sieges (especially if they’ve eaten recently), while ferrets en masse are referred to as a business. 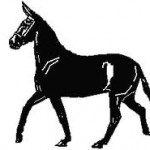 After sticking my nose in such a book, instead of staring at the free cell screen, I’m likely to gaze off into space, wondering if there’s any context, any context at all, in which the Duke of Moreland might mention a business of ferrets, a murder of crows, or a barren of mules…. Maybe that should be the Baron of Mules?