I’m working through revisions for a story about Lady Louisa Windham, and her handsome swain, Sir Joseph Carrington. Joseph quotes a little Shakespeare to Louisa, and later in the book, the Duke of Moreland reads his duchess passages from the same sonnet, the entirety of which is:

That time of year thou mayst in me behold

When yellow leaves, or none, or few, do hang

Upon those boughs which shake against the cold,

In one thou see’st the twilight of such day

As after sunset fadeth in the west;

Which by and by black nigh doth take away,

Death’s second self, that seals up all in rest.

In me, thou see’st the glowing of such fire,

That on the ashes of his youth doth lie,

As the death-bed whereon it must expire,

Consumed with that which it was nourished by.

This thou perceivest, which makes thy love more strong,

To love that well which thou must leave ere long.

The image of a ruined choir has stuck with me, referring as it does to…. (per OED):

a.     That part of a church appropriated to the singers; the part eastward of the nave, in which the services are performed, separated from the rest of the building by a screen or screens, usually of open work; the chancel. (Now so called chiefly in cathedrals and such large churches as show the cathedral or minster type.) 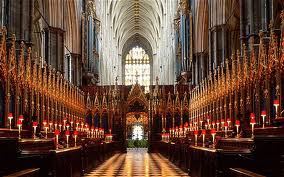 Having seen a few choirs, at Westminster Abbey, St. Paul’s and York Minster, the idea of the intricately carved, lovingly crafted dark wood falling into ruin, no longer reverberating with glorious music, feels to me particularly poignant. If ever an image could evoke lost glory, wouldn’t it be a silent, ruined cathedral? And yet, in both instances in the book, the very act of a man reading poetry to the woman he loves is evidence of a regard that never stops flowering and growing stronger, one that will transcend even death. That he chooses this poem signifies that his love will be all the more enduring.