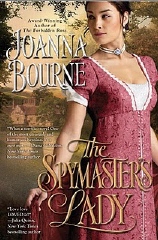 I’m indebted to author Joanna Bourne for this treat, which she uses in “The Spymaster’s Lady” (Berkeley Sensation, 2008). Our heroine, Annique, is in the hands of the British spymaster, Robert Grey, traveling across northern France with half the French secret police after them. The French want Grey on general principles, but Annique they believe to have betrayed the Republic.

She must escape, she must keep body and soul together, and she must physically and professionally hurt Grey, whom she holds in increasing regard, to do both. And top off all that, she wakes up to find that her hair is being farouche, which OED considers an English word of French origin.

Even in Napoleonic France, a girl could have a bad hair day, but in the hands of a gifted author, the word used to describe her bad hair day is precisely, exactly, exquisitely right for that story.