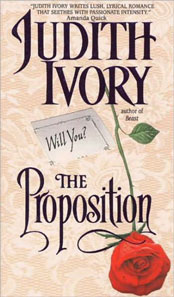 I’m re-reading Judith Ivory’s “The Proposition,” (Avon 1999/2010) a delightful high Victorian tale about a marquess’s daughter and a rat catcher. Ms. Ivory has a command of the language I can only envy, and so for this word corner I’ve chosen a word from the pages of her book.

Congeries means a heap or mess of things all piled together. She pulls out this word when Mick and Winnie (Lady Edwina Bolash to everybody but her swain) catch site of the place where Winnie grew up, now in the hands of her second cousin once removed, the nasty, elderly Duke of Arles. Mick has known the rural splendor (and poverty) of Cornwall, and he’s seen the great houses and slums of London (all being suitable housing for rats). But when he comes upon Uelle, where Winnie was reared, this is Ivory’s rendering:

“It was a congeries of civilization, like an old medieval village, yet orderly, the buildings–there were corridors of them–arranged in courtyards, around gardens, squared, their corners rising in massive castellated towers…”

A congeries of civilization–why couldn’t I have been the one to render such a phrase in a casual description on page 309?