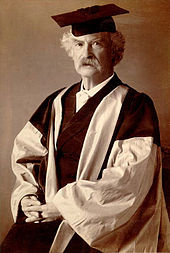 When the autobiography of Mark Twain (Samuel L. Clemens 1835-1910) came out, I bought a print copy. The guy has a voice like no other, and he was canny enough to require that his memoirs (largely dictated to a stenographer in the months before his death) not be published in full until 100 years after his death. That is some market savvy. In the picture at right, Twain is clad in the garb in which Oxford conferred an honorary D. Lit. upon him.

The word sesquipedalian is one I have only come across reading Twain. It literally means “a foot and a half long,” though in Twain’s parlance it refers to words having many syllables–which he could wield even alliteratively, as in “Impressive incomprehensibility.”

A little quote for your delectation from “Innocents Abroad:”

This book is a record of a pleasure trip. If it were a record of a solemn scientific expedition it would have about it the gravity, that profundity, and that impressive incomprehensibility which are so proper to works of that kind, and withal so attractive. Yet not withstanding it is only a record of a picnic, it has a purpose, which is, to suggest to the reader how he would be likely to see Europe and the East if he looked at them with his own eyes instead of the eyes of those who traveled in those countries before him. I make small pretense of showing anyone how he ought to look at objects of interest beyond the sea – other books do that, and therefore, even if I were competent to do it, there is no need.