One of the many interesting threads I’ve come across on the Beau Monde FB page had to do with how to describe a Regency hangover. OED defines a hangover as “the unpleasant after-effects of (esp. alcoholic) dissipation,” and cites written use of the term from the early 1900s.

Try as we might, experienced authors and researchers of the Regency era could not come up with a term that meant “hungover.” We found many, many terms for drunk, inebriated, and impaired, among them: disguised, bosky, boosey, dipping too deep, eating Hull cheese, foxed, fuddled, half-sprung, top-heavy, jug-bitten, in his cups, in his altitudes, too ripe and ready, or on the cut.

But not hungover. I have a few theories… one being that spirits were imbibed with such frequency that men didn’t have a chance to isolate the miseries of a hangover from the pleasures (dubious though they might be) of inebriation. Another theory is that the 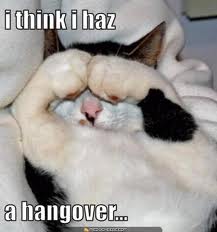 headache powders of the day, many including opium derivatives, were an immediate and effective remedy for most ailments. Add to this that swilling coffee and tea in quantity also provided goodly doses of caffeine to go with the analgesics available, and maybe these lucky people were in truth not often bothered by the modern inconvenience we call a hangover. .