Book 9 in the True Gentlemen series

Oak Dorning is an artist determined to take his place among London’s most successful portraitists. Town life is expensive, though, so a temporary post restoring a few old paintings for a ruralizing widow strikes Oak as a prudent detour on the way to his brilliant future.

Verity Channing was married to a renowned artist, and knows firsthand how spiteful  London sophisticates can be. A quiet life in the country is fine with her–also lonely and rather dull–until Oak finds scandalous treasures lurking in her art collection. When somebody sets out to ruin Verity, Oak must choose between his cherished ambitions and the lady who fills his dreams.

Oak Dorning and his temporary employer are having an interesting discussion…

Mrs. Channing swept past Oak into the gloom of the attic, her faint floral fragrance blending with the scents of dust and old wood.

“I don’t go around kissing strange men, Mr. Dorning,” she said, facing away from him. “You were kind to Catherine, and that touched me, and I still should not have… I should not have kissed you. Not even on the cheek.”

So they were to have a discussion. Very well. “Why not?” Oak asked. “Kissing is enjoyable, provided all parties to the activity are consenting adults.”

“Because…” She turned slowly. “One shouldn’t kiss strangers, in the first place.”

“One should not be caught kissing strangers, perhaps. What’s in the second place?”

She drew a finger across the shelf of a sconce that held an empty oil lamp. “I haven’t wanted to. Kiss any strangers, that is. Kiss anybody.”

Oak pushed the door closed. “You have been in mourning.” He took out a handkerchief, dusted off the top of a sea trunk, and gestured for the lady to take a seat, which she did. “Might I have the place beside you?”

“And yet, you call me Mr. Dorning.” Vera Channing was pretty, and she was more than pretty. Oak wanted to capture the more on canvas, not simply the lovely face and gracefully curved figure.

He also wanted to kiss her, and not only on the cheek.

“Who do you think did that landscape?” she said, frowning at a canvas resting against the far wall.

Oak rose from the trunk and forced himself to consider the sheep, the clouds, and the little stream running diagonally through the scene.

“Peter Denton has a tendency to structure his images with water, and this resembles his work. He’ll put a mill pond or a stream at a focal point, or place his subjects on the shore of a sparkling lake. He’s also no great fan of textured brushwork, mostly because he hasn’t a gift for the technique. He and Mr. Turner were reported to have great rows about texture when they were both probationers at the Royal Academy.”

“Mr. Turner has great rows with many people. My late husband kept a cordial distance from him.”

“Mr. Turner and I have not met, though I’ve spent hours in his gallery. This might also be the work of Hanscomb Detwiler. He’s quick, accurate, and a good mimic, but he also lacks a sense of adventure when it comes to brush work.” The painting held other clues to the artist’s identity—the specific blue of the sky, the manner in which sunlight was flatly reflected from the cottage windows—but Oak wasn’t particularly interested in the painting.

He was interested in the woman wearing the old dress as she sat on the dusty trunk. “Will you kiss me again?”

“I want to, but I’m trying to determine my motivations. Behaving impulsively is the province of artists, not their widows.”

Oak resumed the place beside her on the trunk. “I cannot afford to behave impulsively. I know what I want: a career as a respected painter. That has been my ambition from earliest youth and remains the objective I will pursue when I’ve restored your paintings.”

“Honest,” she said. “I appreciate honesty.”

“I thought you might. I certainly hope to be dealt with honestly.” And that seemed to settle the matter. Neither of them was looking for a permanent attachment, and neither of them wanted a mindless indulgence. 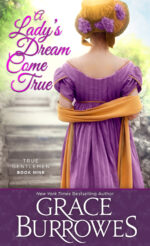 “Very much.” More than kiss her too. She had to know that.

She rose and twisted the lock on the doorlatch. “Why don’t we give it a try and see how it goes?”

Oak remained seated, the better to ignore the evidence of arousal this conversation was inspiring. “Will you regret this?”

Oak considered that question, or tried to, as Vera stood before him. He would leave Merlin Hall in the autumn, and whether he painted her portrait or not, he’d have canvases for Sycamore to hang in his club. He would travel to London to deliver those paintings in person, and to embark on his activities as a professional portraitist. Nothing on that schedule precluded a few friendly interludes with a willing widow.

“No regrets,” Oak said. “No expectations and no regrets.”

Vera stepped between his legs and looped her arms around his shoulders. “This is an experiment, Mr. Dorning. You will in some ways be my first. Moderate your expectations accordingly.”

“Oak.” He took her by the hips and drew her closer. “An experiment then.”

She pressed a luscious, lingering kiss on his mouth, and desire reverberated through Oak like a thunderclap. Her hands winnowed through his hair and he rose, the better to gather her in his arms and lose himself in her embrace.

And other thoughts were howlingly inconvenient: Oak would be Vera’s first, as she’d said. Her first affair, her first intimacy as a widow, her first foray into non-marital overtures. She’d waited several years to take this step and chosen him from among many options.

Oak was mindful of the honor she did him and he offered her respect, liking, and desire in return. Even so, he could not ignore the plaintive, foolish voice in his head that admitted to envying the man who could take a permanent place at her side.

Order your copy of A Lady’s Dream Come True!

A Lady’s Dream Come True is available in the following formats:

A Lady’s Dream Come True is Book 9 in the True Gentlemen series. The full series reading order is as follows: