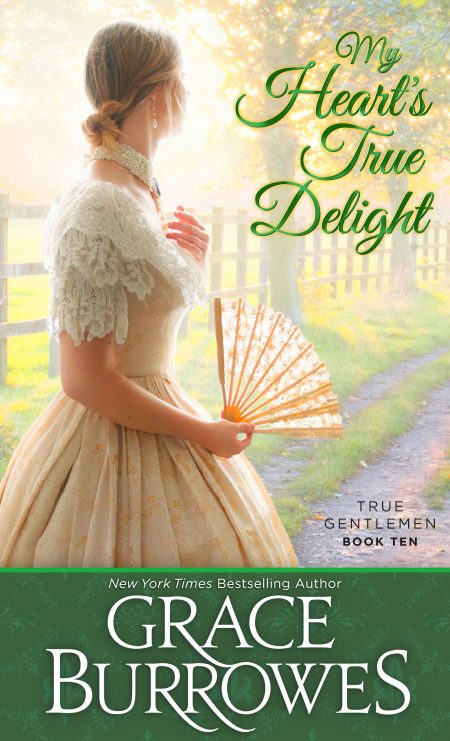 Book 10 in the True Gentlemen series

Ash Dorning has loved Della Haddonfield from afar for years. He has played the part of the cordial family connection and battled every demon from lack of funds, to meddling relatives, to a recurring case of the blue devils–while other men have won Della’s smiles. When Della lands in the midst of scandal, those fellows who fawned over her hand disappear behind the nearest potted palms, leaving Ash to waltz to the rescue.

Della is compromised by a thoroughgoing bounder, and only Ash’s loyalty stands between her and hopeless ruin. But Ash has played least in sight with her for too long, and too many secrets lie between them for Della to believe that Ash is motivated by anything other than gentlemanly duty. When troubles comes calling once again, Ash and Della either learn to trust their love, or they will lose everything they hold dear—including each other.

“If you are so unforgivably clodpated as to challenge Chastain to a duel,” Ash Dorning said, “I will not only refuse to serve as your second, Tresham, I will shoot you in the arse myself. Lest you forget, I was raised in the country. My aim is faultless.”

“You wouldn’t,” Jonathan Tresham replied. “Della Haddonfield would never forgive you for wounding her devoted brother.”

Ash poured two fingers of brandy from the better stock kept behind the bar in The Coventry Club’s game room. At this mid-morning hour, the cleaning crew had already come through. The space was was tidy and deserted, and a perfect place to talk sense into Tresham.

Or try to. “If you add fuel to the flames of gossip,” Ash said, “by involving Lady Della’s name in a matter of honor, you will be the one she never forgives. As far as polite society is concerned, the Haddonfield menfolk are her brothers. Your involvement in the situation would only cause the wrong kind of speculation.”

Lady Della’s mother and Tresham’s father had had an affair while married to other people. The tall, blond Haddonfields affectionately referred to the petite dark-haired Lady Della as their changeling, but anybody who took a close look at Della and Tresham side by side would begin to speculate.

If they had any sense, they’d speculate silently. Della’s oldest Haddonfield brother, Nicholas, was the Earl of Bellefonte, while Tresham was heir to the Quimbey dukedom. Della was fiercely beloved by all of her siblings, and by any number of in-laws and relatives.

And Della was loved by Ash too, not that his sentiments had any bearing on anything.

“Why did she do it, Dorning?” Tresham took his drink to the roulette table and gave the wheel a spin. “Why run off with Chastain? He’s a bounder and a rake and the worst kind of inept card player.”

“To those just down from university,” Ash said, “Chastain offers a certain shallow-minded bonhomie. He’s good-looking. He pays his debts or we’d not let him back in the door.” Though how he paid his debts was something of a mystery.

“His damned father must be cleaning up after him,” Tresham snapped. “Last I heard, Chastain was engaged to some French comte’s daughter, so Papa is doubtless keeping Chastain out of trouble as best he can. I really do want to kill him.”

So do I. “That won’t help. Chastain got no farther with Della than some inn at Alconbury. If he wants to live, or ever sire children, he’ll keep his mouth shut. The whole business will remain a private regret for both parties.”

By daylight, the game room looked a little tired, even boring. The art on the walls depicted good quality classical scenes—scantily clad nymphs, heroic gods, but nothing too risqué and nothing too impressive either. Without the click and tumble of the dice, the chatter of conversation, or the sparkle of the patrons’ jewels by candlelight, the room was simply a collection of tables and chairs on thick carpet between silk-hung walls.

Any Mayfair town house would have been at least as elegant and had far more personality. But that was the point: The Coventry was comfortably bland, not showy, not distracting. The focus of the patrons was to be on the play and on each other.

Ash’s focus was on Della Haddonfield, whom he had given up trying to forget months ago.

“Chastain drinks when he loses and he loses nearly every time he plays,” Tresham said, wandering between the tables. “Sooner or later, he’ll drink too much and start wittering on about that time he eloped with Lady Della Haddonfield. He spent half the god-damned night with her in that inn, Ash. I should kill him for that alone.”

“I know, Tresham,”—God, do I know—“but Della apparently went with him willingly. Bellefonte would tell you if that weren’t the case, I trust?”

“I have no bloody idea.” Tresham perched on a dealer’s stool and took up a deck of cards. “I am not one of them. Your brother Will married into the Haddonfield clan. What does he say?”

“Will and Susannah are ruralizing. I gather several litters of puppies are due any day, and thus Willow remains in the country.”

“I hate this,” Tresham said, shuffling the deck with casual expertise. “Bellefonte ought to challenge Chastain. Bellefonte’s a peer. Nobody would say a word if Chastain got the worse of the encounter.”

A peer could not honorably challenge a commoner. “Deal me in.” Ash took up a stool at the same table. “Has it occurred to you that Della might be smitten with Chastain? She might be heartbroken that Chastain’s father interrupted their elopement.” 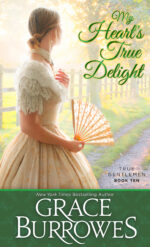 “Theo’s theory is that Della chose Chastain because he’s nothing more than a handsome lackwit. Della could manage him without looking up from her embroidery hoop. She’s an earl’s daughter, so Papa Chastain would eventually reconcile himself to the match.” Tresham gathered up the cards and set the deck in the middle of the table. “I shall beat you at cribbage.”

Lady Theodosia, Tresham’s lovely wife, had apparently already had a turn trying to speak sense to him.         Ash produced a cribbage board from the shelf under the table.

“You don’t think Della smitten, then?”

“I know she isn’t.” Tresham’s tone was gloomy. “She once mentioned Chastain to me when I drove out with her. Her tone was less than respectful.”

Ash cut for the crib and pulled the low card. “Feelings can change.”

“Not those feelings. Della expressed pity for his sire, and the opinion that Chastain will bankrupt the family within two years of gaining control of the Chastain fortune. She’s right.”

Play moved along, with the cards favoring Ash. His leading peg was halfway around the board when Sycamore sauntered in looking dashing and windblown in his riding attire.

“That is the good brandy at Tresham’s elbow, if I’m not mistaken,” Sycamore said, pausing to remove his spurs. “Since when do we give away the good stuff, brother mine?”

Ash picked up his cards to find another double run, his third of the game so far. “We are generous with poor Tresham because he needed a medicinal tot for his nerves.” As had Ash. “I’m beating him soundly.”

Tresham put down his cards. “What have you heard?”

Sycamore could be tactful—about once every five years—and then only out of a perverse impulse to keep his older siblings off balance.

“Chastain was apparently in his club last night, lamenting that his French bride refuses to cry off, despite the failed elopement with a certain Lady Delightful.”

Tresham was on his feet, so quickly he knocked his stool over. “I will kill him, slowly, after protracted torture. I will maim him, and cut the idiot tongue from his empty head. All of polite society knows that Della’s given name is Delilah, and Chastain apparently knows it too. By Jehovah’s thunder, I ought to ruin his father for siring such a walking pile of offal.”

“If you do ruin him,” Sycamore said, taking a sip of Tresham’s brandy, “please do it here, so the club gets a bit of the notoriety and ten percent of the kitty.”

“You cannot.” Ash said, getting to his feet. “You cannot in any way intimate that Chastain’s wild maunderings have any connection to reality or to Della, and you most assuredly cannot strut about all but proclaiming that her ladyship has an illegitimate connection to you.”

Ash stepped closer. “No. Not if you care for you her, which you loudly claim to do. The Haddonfields have substantial consequence, they have weathered other scandals. You can be a friend of the family, a cordial acquaintance, but you cannot involve yourself in this in any manner that makes it worse than it already is.”

And neither could Ash.

Tresham finished his drink and set the glass down on the table with a thunk. “I’m supposed to be the sensible one. But then, I’m selling most of this club to you two. How sensible was that?”

“Very sensible,” Sycamore said. “We’re making you pots of money to go with the barrels and trout ponds worth you already have.”

“Della will be a spinster now,” Tresham said, and Ash sensed they’d reached the heart of the dilemma. “She’s the only Haddonfield yet unmarried. They’ve all been trying to fire her off—even Theo has tried to help—but to no avail. Now Chastain has botched an elopement, and Della will suffer the consequences. Nobody will marry her.”

“Perhaps she doesn’t want to be married,” Sycamore said.

“Then why elope with Witless Chastity?” Tresham snapped. “That was a desperate measure, indeed, and now she’s to be an old maid.”

Ash picked up the discarded brandy glass and set it on the sideboard. “She will not be an old maid. Della is lovely, charming, smart, kind, funny, and quite well connected. You are making too much of bad moment.”

Sycamore sent him a curious look. “This is more than a bad moment. She spent most of the night in the same room with Chastain at the inn in Alconbury. That news was quietly galloping up and down the bridle paths this morning in the park. I discredited the rumor with vigorous disbelief, but it’s as Tresh says: Lady Della has had no offers, and Chastain is not much of a prize. The appearances are dire.”

If Ash could have beaten himself soundly at that moment, he would have. Lady Della had quite possibly discouraged many offers while waiting for a proposal from Ash himself.

“This is not dire,” he said. “The necessary steps are simple. The Little Season is underway. We will treat Lady Della to a show of support, mustering a phalanx of eligibles to stand up with her. She will carry on as if the gossip is just that. Chastain will learn discretion in a violent school if need be, and come spring, some other scandal will have everyone’s attention.”

“It’s a plan,” Sycamore said, in tones that suggested it was a laughably stupid plan.

“And if this plan doesn’t work?” Tresham asked, “then may I part Chastain from his pizzle?”

“If the plan doesn’t work, then I will marry Della myself.”

Sycamore for once had nothing to say, while Tresham looked mightily relieved. Ash could make this offer because he was sure to a confirmed certainty that he was the last man Della Haddonfield would ever agree to marry.

My Heart’s True Delight is available in the following formats:

My Heart’s True Delight is Book 10 in the True Gentlemen series. The full series reading order is as follows: