Book 11 in the True Gentlemen series

Fabianus Haviland, Viscount Penweather, did not journey to the wilds of Dorsetshire in the dead of winter to engage in yet another dalliance with yet another lonely widow. Being a trifle lonely himself–only a trifle–he’s looking for a fresh start in fresh surrounds.

Fabianus has always enjoyed the company of sensible women, though, and Lady Daisy is very sensible. Her ladyship doesn’t mince words regarding disappointing marital experiences, is ferociously devoted to her children, and has an immediate rapport with Penweather’s small daughter. When Daisy’s happiness is threatened by her in-laws, Penweather is honor-bound to intervene. Soon Daisy will have to choose, between her children and the man who makes her dream once again of the kind of happily ever after she’d thought could never be hers.

The lady stalking across the frozen garden had apparently passed from the brave phase of widowhood into the indomitable phase. Her unrelievedly black attire showed starkly against the winter-white landscape, and her brisk movements contrasted with the deep stillness surrounding her.

Fabianus Haviland, Viscount Penweather, sensed the woman’s determination from her stride, her posture, the measured speed with which she covered the snowy ground. Instinct told him she’d been recently bereaved. This was not a dowager of long standing, but rather, a woman new to her grief and bent on besting it.

“My sister comes to pay her weekly call,” Grey Dorning, Earl of Casriel, said, passing Fabianus a tot of brandy. “To your health.”

“And yours,” Fabianus replied, silently toasting the lady’s fortitude as well. Some widows never reached the indomitable stage. They remained paralyzed for years by the shock of a spouse’s passing, becoming vague, faded creatures whom family worried over and resented by turns.

Casriel took the place beside Fabianus at the window. “Lady Daisy has made it through the first three months of widowhood. My wife, who has reason to know, claims that’s the hardest part.”

Fabianus took a sip of fine libation, savoring the mellow burn in his vitals. “Everyone grieves differently. For some, the condolence calls are the greater difficulty. For others, the early days are the worst tribulation.” For still others, the occasional widower, for example, the real torment began when life was supposed to return to normal, which it could never, ever do.

Casriel eyed him speculatively. “I forgot you once had something of a reputation.”

Fabianus’s nickname in the less genteel clubs had been The Widow’s Revenge, and he—dimwitted cockerel—had found that a source of amusement. The whole business had started out innocently enough, with a few merry widows popping out at him from shadowed alcoves when he’d come down from university. His breeding organs had popped out of his breeches with equal regularity, and a pattern had formed.

The woman in the garden stopped at the fountain in the center of the formal parterres. The month being February, any body of water would be covered with a sheet of ice. Her ladyship toed through the dusting of snow until she found a stout stick, which she jabbed forcefully at the interior of the fountain.

“She’s breaking the ice for the birds and squirrels,” Casriel said. “My father taught me to do that. I’m not sure who taught Daisy. She’s considerably my junior, and while not exactly a stranger to me, she also married before the rest of us. I am now ordered by my countess to reacquaint myself with my younger sister. One hardly knows where to begin in such a fraught endeavor, but aided by my—”

“My lord, excuse me.” Fabianus set down his drink. “Your garden has been invaded by a demon sprite, and I must notify my nursery staff.” Fabianus had known dragging Pandora along on this trip was ill-advised, but then, leaving the child to wreak havoc in Hampshire would have been patently stupid.

“My gracious,” Casriel said, eyeing the scene in the garden and taking another sip of his drink. “Intrepid little thing.”

Casriel could afford to see humor in the situation. He wasn’t responsible for the imp scampering around a snowy garden clad in nothing more than a pair of unlaced boots.

“Pandora Haviland, you will stop this nonsense at once.” He walked, he did not run, across the terrace. “For shame, child, to behave in such a manner.”

Lady Daisy had tossed her stick away and left the fountain. She’d also withdrawn a small white cloth bag from a pocket in her black skirts.

Pandora veered right, down a path that would intersect with Lady Daisy’s. Fabianus did not favor sprinting after the girl, but neither could he allow her to cavort unclad in the bitter cold.

“Pandora,” Lady Daisy called, shaking her little cloth bag. “Are the pirates after you?”

Pandora changed course again, this time heading straight for Lady Daisy. “I’m a pirate,” the child bellowed. “I have escaped the Royal Navy!”

What fool put such fancies into an already imaginative head, and why must those boots be unlaced? Visions of a little smashed nose, a scarred chin, chipped teeth, bloody knees, and endless tears filled Fabianus’s mind. 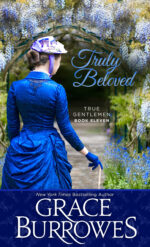 He stalked after the child onto the path that led to the fountain, resisting with every footfall the urge to simply run Pandora to earth. A footman in Penweather livery and a nursemaid with her cap askew pelted onto the terrace and skidded to a halt at the top of the steps.

“I have booty,” Lady Daisy announced, extracting some sort of sweet from the bag, tossing the treat into the air, and catching it in her mouth. “Golden lemon drops, purloined from the Crown’s dockside warehouses. Who will steal my treasure in these dark, treacherous alleys?”

The result of this speech was for Pandora to gleefully attempt to chase her ladyship, who at the opportune moment turned and snatched the child onto her hip. The widow was nimble and strong, for Pandora, at five years of age, was no sylph.

“I have taken the fair princess captive,” Lady Daisy announced. “A beautiful maiden who will surely bring a fine ransom.”

The child wanted a sound birching, but Fabianus could not bring himself to heed Nanny’s guidance in that regard. Pandora was so small, she had lost her mama, and she did try to be good, according to the nurserymaids and footmen.

“Commodore Lord Penweather,” Lady Daisy called, “what shall I do with our prisoner?”

Casriel had joined the gawkers on the terrace, and he still looked thoroughly entertained. Clearly, his children, like every other child in England save Pandora, were the well-behaved sort.

“She’s to be taken to the brig,” Fabianus retorted, approaching Lady Daisy. “You lot, make yourselves useful.” The pair on the terrace trotted down into the garden, while Fabianus draped his cloak around Pandora’s chubby form. “My lady, I do thank you, and I apologize for Pandora’s unruly behavior.”

Lady Daisy managed to hold the child on her hip with one arm while arranging the cloak with her free hand.

“I had gone too long without making the acquaintance of a fellow pirate,” she said, passing the girl to the footman. “Pleased to make your acquaintance, Lord Penweather. Casriel warned me you’d be visiting, but I thought you weren’t expected until tomorrow.”

Fabianus bowed, though why was Casriel idling about when he ought to be performing proper introductions?

“I am at your service, my lady. The horses made better time down from Hampshire than expected.” Frozen roads had advantages over muddy roads.

“Lady Daisy Fromm.” She tossed off a brisk curtsey and took Fabianus by the arm. “I hadn’t realized you had arrived, else I would not have intruded on my brother’s household. You and Casriel attended university together, am I correct?”

She was a small woman, particularly compared to Fabianus, but she was steering him, physically directing his steps to the terrace, and conversationally setting his feet on the path of small talk and pleasantries.

She was also attractive, or as attractive as any fair-complected lady could be when wearing weeds. Her features were not exactly delicate—the chin firm, the nose a bit bold—but the whole was interesting and set off by a somewhat full mouth.

What raised her appearance beyond mere prettiness, though, was her eyes. Their color was an unusual lavender hue, which was remarkable in itself, and illuminated her countenance aesthetically. The directness of her gaze, though—unwidowlike, almost unladylike—turned that color to cool amethyst fire.

“Your brother tells me you are recently bereaved, my lady,” Fabianus said as they ascended to the terrace. “My condolences on your loss.”

She gazed out over the snowy garden, at the crows now squawking and flapping at the fountain.

“My thanks for your kind words, my lord. You are sans coat. Let’s get you out of the cold, shall we?”

Fabianus revised his earlier assessment of her as she escorted him back to the Dorning Hall library. She was not in the indomitable phase of widowhood. Lady Daisy was simply, absolutely, unto her soul, indomitable. The intriguing question was, why had an earl’s pampered daughter had to develop that trait, much less raise it to a high art?

And then another question popped into Fabianus’s head: Who had taught this lady to play pirates and to entrap escaped prisoners with a smile and a promise of lemon drops?

Truly Beloved is available in the following formats:

After your purchase, please check your email for a new message from Bookfunnel, containing the link to download your book. You will automatically be guided through the steps to deliver the book to your device using Bookfunnel. The good folks at Bookfunnel offer customer service that can walk you through any quirks unique to your device or software.

Truly Beloved is Book 11 in the True Gentlemen series. The full series reading order is as follows: