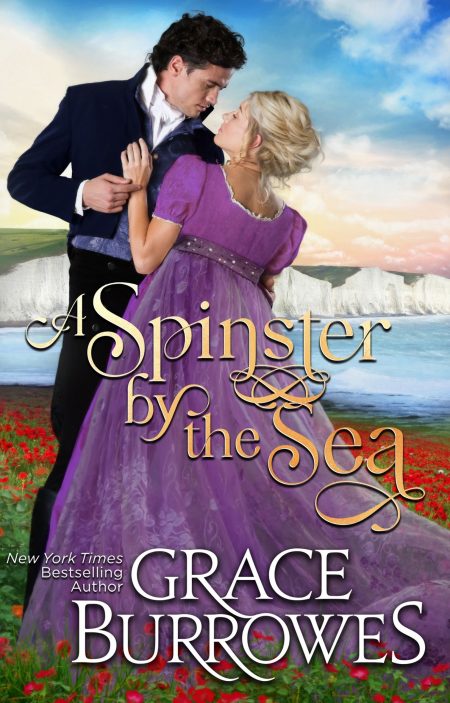 A Spinster by the Sea

Heiress Anne Baxter seeks a repairing lease by the sea after she’s left standing at the altar for the second time. To her utter mortification, the best man, Augustus, Duke of Tindale, has been invited to a house party at a nearby estate, and comes upon Anne trying to enjoy some solitude along the shore.

Augustus believes Anne is far better off without the buffoon who jilted her, but knows polite society will hold the lady accountable for the failed wedding,… weddings, rather. He proposes to show Anne marked attention at the house party, in hopes that a ducal suitor will prove to the gossips just how lovely Anne is. Alas for Augustus’s brilliant scheme, the best laid plans of dukes of damsels, oft go awry!

A Spinster by the Sea:

“Can’t fault Miss Baxter’s bloodlines.” Lord Corbett Hobbs held up an amethyst-encrusted hand mirror and ran his tongue over his teeth. “Related to two earls, one on each side. Mama says she has good hips. The fellows admit she has a delectable arse.”

Augustus, Duke of Tindale, glanced at the clock. “If you are mentioning your bride’s bum to me less than an hour before the wedding, you are at least half-foxed.” Were Hobbs sober, Augustus might have bothered to remonstrate with him further.

Hobbs passed the hand mirror to a silent valet. “Last night’s celebration became this morning’s fortification. You must agree that my bride is not the stuff of love’s young dreams. Twenty-five if she’s a day, and appallingly well read.”

Augustus took the blue delphinium boutonniere from the valet. “Your bride is intelligent, which gives me some hope for your progeny. Hold still.” Miss Anne Baxter was not only smart, she also had a good sense of humor, plenty of patience—she’d need a generous supply married to Hobbs—and a dowry that had earned her the hand of no less than a ducal spare.

“Mama said the same thing.” Hobbs tipped his chin up as Augustus affixed the flower to his lapel. “That my children will need to inherit their wits from their mama, to which Papa replied that I would supply the looks. I do cut quite a fine figure, don’t I?”

Physically, Lord Corbett Hobbs was masculine perfection. Just over six feet, blond, broad-shouldered, and blessed with exquisite features right down to a nose that knew to keep to the noble side of aquiline. Compared to his lordship, Augustus felt like plough horse trudging beside a prancing thoroughbred colt.

Miss Baxter had earned the enmity of every matchmaker in Mayfair, Paris, and Berlin by snapping up that ducal colt. How did the young lady feel about her supposed good fortune?

“You are all that is manly perfection,” Augustus said. “Where’s your hat?”

Hobbs looked to his valet, who bowed. “A moment, Your Grace. His lordship had yet to decide between the cooing dove and the Spanish moonbeams.”

“I’m not manly perfection,” Hobbs said, when the valet had closed the door. “I’m nervous as hell, Tindale. I esteem Miss Baxter greatly and all that, but Marie is threatening to toss me over, and Papa has said he won’t pay my gambling debts until I produce a son. Do you know how long it takes for a baby to show up? And the first three will likely be girls, and that means Miss Baxter and I cannot live entirely apart, and this whole marriage business rather overwhelms one.”

Hobbs’s mistress was said to keep her jewelry in a sizeable sea chest, so skillfully did she play her current protector. She threatened twice a week to toss Hobbs over, and the betting books were full of wagers on the topic of her next protector.

“You could be a father by this time next year,” Augustus said, “and some pre-marital jitters are to be expected. Besides, once you’re wed, you can pay off your own gambling debts.” Miss Baxter’s settlements were yet one more reason the matchmakers resented her, though a fortune that size ought to have inspired Corbett to at least attempt fidelity.

Augustus, having come into his title unexpectedly, knew all about polite society’s cruelty to those they deemed outsiders. Miss Baxter bore up with good grace, and Augustus had often wanted to ask her how she remained so civil in the face of such meanness.

“Besides,” Augustus added, “marriage should be overwhelming.”

“But in a good way.” Hobbs surveyed himself in the cheval mirror. “In a wonderful way. One ought to be at least friends with one’s spouse. I realize I’m being romantic—Mama says I’m being ridiculous—except that Miss Baxter is always reading, and she doesn’t let a fellow win any verbal horse races just because he’s the fellow, and I have this awful sense that I amuse her.” Hobbs shifted his stance, presenting the mirror his left side. “You wouldn’t understand.”

Augustus understood all too well. Hobbs was no scholar, nor was he cruel by nature, but from boyhood on, he’d expected the privileges of his station to precede him.

And they had, until he’d been matched with Miss Baxter. She was kind, but she did not suffer fools, did not dissemble for the sake of currying favor, and did not simper and blush the better to impersonate a harmless nitwit.

“I understand that you and Miss Baxter are to wed, and I have less than one hour to get you to the altar.”

Hobbs took out a silver flask embossed with the ducal crest and tipped it to his lips. “Damned thing is empty. Spare a fellow a nip, Tindale. Gin would be best—doesn’t linger on the breath.”

“I have no spirits on my person. You’ll find plenty to drink at the wedding breakfast.”

The valet returned carrying a pair of identical gray hats.  “Spanish moonbeams,” he said, holding up one hat. “Cooing dove.” 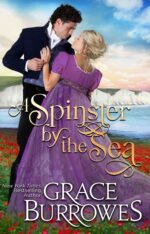 Gray did not clash with blue, even Augustus knew that much. “You won’t be wearing the hat during the ceremony, Hobbs.”

“Give me the Spanish moonbeams,” Hobbs said, holding still so the valet could place the hat upon his head. “That will do. You may be excused, Benner.”

“Congratulations on the happy occasion, my lord.” Benner bowed and withdrew.

“Let’s be off, shall we?” Augustus said, resisting the urge to toss Hobbs over his shoulder and convey him bodily into the coach that had been waiting out front for nearly twenty damned minutes.

“I don’t have a good feeling about this,” Hobbs said, pulling on a pair of gloves from the half dozen laid out on his vanity. “Truly, I do not, Tindale. I’m only the spare. Why should I have to marry so soon?”

Augustus suspected that Hobbs’s nuptials were intended to save his parents the bother of managing an easily bored spare-about-Town. Miss Baxter could be trusted to take on that thankless task, though it was doubtless a waste of her talents.

“You are nearly thirty. Time to settle down,” Augustus replied. “Besides, your brother has no sons yet. Do your bit and your parents will spoil your offspring rotten.”

“They no longer spoil me rotten,” Hobbs said, stalking along beside Augustus. “My quarterly allowance wouldn’t keep a Quaker in cravats. It’s humiliating.”

“Miss Baxter’s settlements will buy you all the cravats you could ever wear.” Augustus offered that placatory observation when he instead wanted to knock some sense into his friend. Hobbs, though, had been the sole hand extended to Augustus in welcome at public school.

Augustus knew now that Hobbs had been indulging in a whim. The expected thing would have been for Hobbs to sneer at Augustus as all the other lordlings had. But Hobbs was a ducal lordling, and thus when he decided to take a benevolent interest in the hulking new boy, the rest of the pecking order had moderated their insults.

“If I were a plain mister, then two of my cousins will still be extant, so yes, I often wish I’d been spared the title.”

Both of those cousins had been healthy young men, but only the elder, Charles, had taken a wife. The lady had not provided him with an heir in the short years of their marriage, and thus Augustus, a lowly if ambitious solicitor, had been elevated to the peerage.

“I wish I could be spared matrimony,” Hobbs said, glancing around the soaring white marble foyer of his parents’ home. “Wish I could take Marie by the hand and spirit her across the border. We’d live in a cottage and everybody would secretly envy me for my boldness.”

What sort of society allowed a ducal spare nearly thirty to remain as self-centered and ignorant as an eight-year-old?

“You can spirit Miss Baxter across the border on your wedding journey,” Augustus said, as the clocks in the house all started bonging the half hour. “Right now, let’s get you as far as the church.”

The butler held the door open, his expression all genial respect.

“Let me refill my flask,” Hobbs said, setting his walking stick on the sideboard. “The decanters in the library will do. Won’t be a moment.” He spun way and trotted down a carpeted corridor.

Augustus waited five interminable minutes, while the butler held the door open and the horses at the foot of the steps stomped and shook their harness. Three streets away, Miss Anne Baxter was doubtless expressing her own impatience in a far more genteel manner.

“Best fetch him, Your Grace,” the butler said. “Lord Corbett was never quite as stalwart as his brother. Always wanted a bit of encouragement.”

“He wants a good hiding,” Augustus muttered. He made his way to the library, all manner of threats piling up in his head, I’ll marry her myself at the top of the list, not that Anne Baxter would have him.

Augustus yanked open the library door, and was greeted by the utter silence of thick carpets, venerable portraiture, and thousands of books that hadn’t been read in the past fifty years. The sole movement in the cavernous room was a white lace curtain wafting gently before the open French doors.

A Spinster by the Sea is available in the following formats:

A Spinster by the Sea is Book 3 in the Siren's Retreat Novella Quartet series. The full series reading order is as follows: