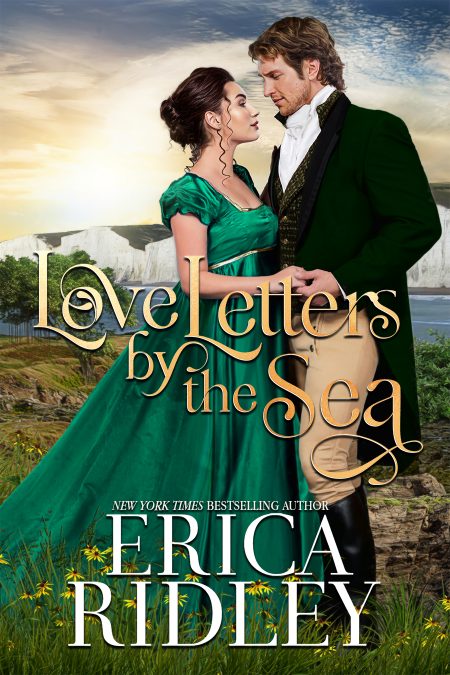 Love Letters by the Sea

What happens when the proprietress of Siren’s Retreat discovers the charming romantic she’s been corresponding with is same villain turning her beloved property into a gaming hell? Find out in LOVE LETTERS BY THE SEA!

When not responding to advice column letters, entrepreneurial widow Mrs. Deborah Cartwright runs bright, beautiful Siren’s Retreat, legendary for helping her lovelorn guests find their perfect match. Deborah experienced love years before, and lightning does not strike twice. Although there might be a light flirtation with a certain anonymous letter-writer she’s definitely not falling for, there’s no time for romance. Not whilst a heartless blackguard is in town to wrest her beloved inn out from under her!

Clever, career-minded Mr. Patrick Gretham is the trusted man-of-business for a powerful lord, who is eager to turn this perfectly situated property wasted on lovebirds into a gambling hell the likes of which no one leaves with their fortunes intact. Over Deborah’s dead body! The beautiful proprietress hates everything Patrick stands for and will fight him every step of the way. Except when they find themselves on opposite sides of a plume. Or falling into each other’s embrace…

Love Letters by the Sea:

…Mr. Gretham reared back in horror. “You gave up a promising career as the main attraction in an opera with national acclaim…for a man?”

“I didn’t ‘give up’,” Deborah protested defensively, although she had in fact quit the opera that same night. “And it wasn’t just ‘for a man.’ I chose love. Siren’s Retreat—”

“—is not the opera. Your stage has shrunk to a three-foot by six-foot space behind a wooden counter. Your audience is now whomever pauses long enough to make a reservation or sign the registry.”

“That’s a horrid interpretation of my life.” She gestured at the sand and sea around them. “I’m not at Siren’s Retreat now, am I? I give tours on occasion. I don’t live in a box.”

“Don’t you? How ‘occasionally’ do you offer tours? Before today, when was the last time you escaped your box for more than an hour or two?”

She crossed her arms and glared at him. There was nothing truthful she could say to refute his unsolicited observations.

“I’m definitely judging,” he agreed. “I just don’t mean to. If you tell me giving up your love of singing professionally was the right decision for you, and that you never once regretted trading that life for this one…I’ll believe you.”

She rubbed her arms. “How can anyone know, at the moment of making a life-changing decision, whether they’re making the right one? Any choice inherently means not choosing the other option. No matter which path you take, it would be perfectly normal for a small, fanciful part of you to occasionally wonder…”

“It’s definitely too late. I’m thirty-five. The opera was fifteen years ago and firmly in my past. Siren’s Retreat is my present.”

“It doesn’t sound like a present to me. It sounds like a lot of work for less fame and fortune. If you suddenly found yourself with unexpected time on your hands, I should hope that you would consider the possibility resuming your dreams and doing something active with your talent.”

“As you correctly—and infuriatingly—pointed out,” she said dryly, “I never have free time on my hands.”

“But if you did,” he insisted. “Your life wouldn’t be over. It would simply be the beginning of a new act.”

She tilted her head and considered him. He seemed oddly passionate about her happiness and well-being. As if he wanted to be certain that no matter what happened, she would thrive.

But why should he think otherwise? She was thriving here in Brighton. Siren’s Retreat was a popular destination—and soon to be more financially sound than ever.

“I’m truly happy,” she assured him. “Siren’s Retreat is my life, and it is a good life. I wouldn’t wish to do anything else, or to be anywhere else. I wake up every morning grateful that this is the path I chose. It’s the right one for me.”

He did not look assuaged by her assurances. “Mrs. Cartwright—”

“Deborah,” she corrected with a chuckle. “If I am to be baring my heart to you.”

“Patrick.” He took her hands in his and held them tight. “I have no right—none at all—”

She waited, but he said nothing more. Just gripped her hands and stared at her beseechingly, belligerently, besottedly. As if he were confused and angry and half in love all at the same time and would rather not be any of it. 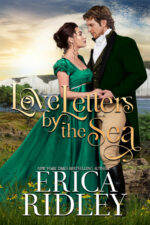 Deborah wanted him to see she had no such anguish. She was very happy—very!—with no regrets at all, none, not for a single moment. She certainly was not plagued by sudden indecision or fighting unexpected amorous impulses. Not for her dearest LostInLondon, and certainly not for handsome Mr. Gretham…er, Patrick…whom she’d first-named in a fit of…

Nothing. Deborah didn’t have fits of any kind. Her world was steady, predictable, unchanging. Fulfilling. Her life was already one hundred percent fulfilling.

As for walking away at any time from the earnest gentlemen standing right before her… well, that was a little trickier. In part because her hands were clutched in his. Possibly clutching him right back.

Which, again, was not romantic in any way. This long, leisurely stroll along the most picturesque beach in all of Brighton contained no hidden meaning.

She was just a humble proprietress on the hunt for a big fish in order to pay her rent. And Patrick was the big fish. Or at least, the medium-sized fish who worked for the bigger fish. This was business, not pleasure.

None of which explained why he had taken her hands in his so passionately.

Or why she had left them there, to be caressed gently by the pads of his thumbs. As if he were just as resistant to romance—and just as powerless to stop himself.

His eyes were heavy-lidded and unblinking. Drinking her in, as if her face was the elixir of life. As though he were thinking about kissing her. As if she might let him.

He leaned closer. Definitely considering kissing her. And clearly unsure if she would let him—or if it was a wise decision, even if both parties were willing.

Which she wasn’t. She’d had and then lost the only man for her. She’d never know love like that again or hold a partner tight in an embrace. Her lips would never again kiss, or be kissed.

All of which was why she was going to put Patrick in his place right this second. Before he got any further ideas. Before he tried something.

Before she stood here and let him.

Order your copy of Love Letters by the Sea!

Love Letters by the Sea is available in the following formats:

Love Letters by the Sea is Book 4 in the Siren's Retreat Novella Quartet series. The full series reading order is as follows: