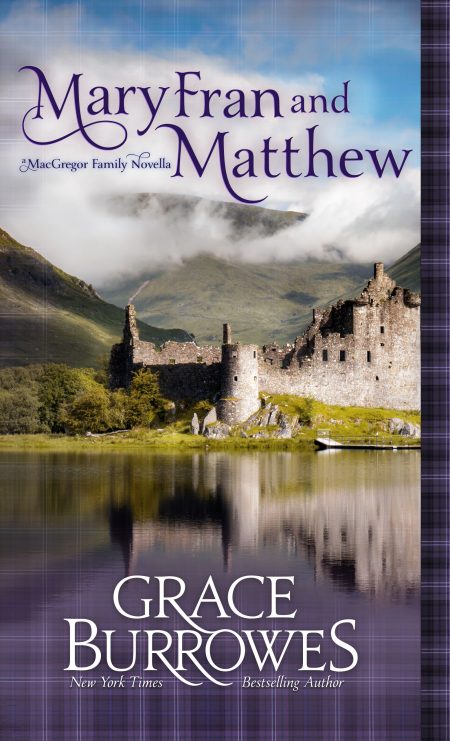 A novella in the MacGregor series

Former military officer Matthew Daniels has been sent home from the Crimea in disgrace. Mary Frances MacGregor is a Scottish widow who loathes everything about the British military, and yet both Mary Fran and Matthew understand more than they want to about being lonely and isolated even amid family. They yearn to understand each other too, but old secrets and divided family loyalties threaten to cost them their chance at shared happiness.

Lady Mary Frances MacGregor has been widowed and lonely for too long at her family’s Highland seat, and handsome Englishman Matthew Daniels has noticed…

“I was hoping I might find you out here.” Matthew Daniels sauntered up from the direction of the gardens, and the guilt roiling in Mary Fran’s gut threatened to choke her.

“I’m in need of a little solitude, Mr. Daniels.” She pulled her shawl more tightly around her shoulders, though it was a beautiful, soft night.

“No, you’re not.” He picked up her hand and tucked it over his arm. “Something has you overset. Are you feeling guilty for having spent the morning with me? All we did was talk, my lady, and admire your family’s holdings.”

Without her consent, he escorted her off the terrace and down into the gardens. And damn him and all his people unto the nineteenth generation, he was right.

“I talked. You talked, though you said precious little.”

“I said enough. I don’t usually burden anyone with remembrances of military life.” He sounded a touch put out with himself, or maybe perplexed, but Mary Fran had been fascinated to hear his recounting of a colonel’s responsibilities in the political cauldron that was the Crimea. She gathered he’d been mustered out through his father’s machinations, which had left the baronial heir guilty and frustrated as war loomed ever closer.

Imagine that. An Englishman feeling guilty the same as a negligent mother might feel guilty.

“I won’t be riding out with you again, Mr. Daniels.”

“I was Matthew earlier today. I rather liked being Matthew to you, and I liked spending my morning with Mary Fran.”

His voice held no accusation, more a sort of wistfulness she could understand all too well.

“Matthew, then.” And she couldn’t leave it at that. She prattled on with no more poise than Fee might show on market day, saying things a grown woman ought not to burden him with. “Fiona was nearly trampled by a bull today while I was out larking around with you. She might have been k-killed.”

He was a man blessed with fluid movement, like a big cat. He didn’t spook her. He just eased around to stand directly before her, put both hands on her shoulders, and pulled her gently into his embrace. “Tell me, Mary Fran. I assume she came to no harm, or you wouldn’t be out here in the darkness, flagellating yourself over a simple childhood misadventure.”

She went into his arms, more grateful for the refuge he provided than she could say. Her brothers treated her to their offhand version of affection, and from time to time Mary Fran allowed herself a discreet flirtation with a passing fellow.

But to be held…

“Talk to me, Mary Fran. You don’t need solitude. You have too damned much solitude even as you thunder around amid your family. Talk to me…” He went on, a low, soothing patter accompanied by equally soothing strokes of his hands over her back, her shoulders, her hair. She would not mistake him for a gentle man, not ever. His ability to be gentle had the tears spilling from her eyes.

She just damn cried for long, wearying minutes. Cried until she realized Matthew had settled her on a bench and kept an arm around her shoulders. He let her wet the front of his shirt and his neckcloth, while she kept his handkerchief balled up in her hand.

When Mary Fran at last fell silent, his thumb traced her damp cheek—a small gesture, but so intimate. She turned her face into his palm, feeling foolish, helpless, and completely at sea.

“I have imposed,” she said, trying to sit up. 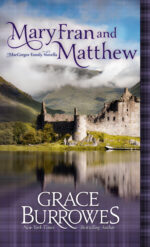 “You have been imposed upon,” he countered, keeping her against him. “You’re supposed to be running a very fancy guest house, taking care of three grown men to save them the cost of a housekeeper, playing lady of the manor with the Queen of half the known world for your neighbor, and raising a rambunctious child without benefit of a father’s aid, guidance, or coin.”

Put that way, it was hard to decide which hurt worse: The comment about saving her brothers the cost of a housekeeper or the bald fact that Gordie’s family had no interest in Fiona.

“One gets weary,” he said, suggesting he was capable of divining her thoughts. His hand—big, warm, and slightly rough—came to rest on the side of her neck. “Not just tired, but weary. Physically, emotionally, morally. At such times, one needs friends.”

He sounded not English, but simply weary himself. A soldier who’d seen too much of war and not enough of peace. A son chafing under the demands of family. A man resigned to loneliness.

“One needs sleep too.” Mary Fran made another effort to sit up, and he let her, but kept his hand on her nape. “I owe you an apology, Mr. D—Matthew.”

“You owe me nothing.” His thumb stroked over the pulse in her throat, which should have been relaxing but was in truth more of a distraction.

“Earlier today…” Mary Fran steeled herself for the cost of being honest. “I had plans for you. Plans that might have involved the gamekeeper’s cottage, had you cast me even a single curious glance. It’s our informal trysting place, because my brothers won’t bring their passing fancies into the house.”

His thumb paused; Mary Fran’s breath stopped moving in her chest. His thumb resumed its slow progress over her skin; she resumed breathing.

“If all you’d wanted was a tumble, Mary Fran, I’d likely have obliged and acquitted myself as enthusiastically as the situation allowed. You are an exceptionally desirable woman, but I think you want something else more than you want a few minutes of oblivion and desire.”

Oblivion and desire? Was that what she’d been after? He was so much more substantial than that, and the yawning need inside her wanted more too. She tried to see into his eyes in the gathering darkness, but there simply wasn’t enough light.

“Let me hold you, Mary Fran. Please.” A suggestion, not a command. He understood her that much, which was better than she understood herself at the moment. She leaned against him and nuzzled his shoulder until she found a comfortable place to rest.

His arms settled around her. She felt his lips brush against her forehead, and something eased in her aching chest. She fell asleep in his embrace, there on the hard bench under the stars.

Mary Fran and Matthew is available in the following formats: 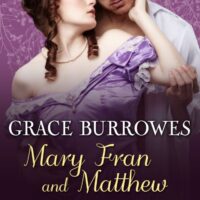 Mary Fran and Matthew is a novella in the MacGregor series. The full series reading order is as follows:

Book 1: The Bridegroom Wore Plaid • Book 2: Once Upon a Tartan • Book 3: The MacGregor’s Lady • Book 4: What a Lady Needs for Christmas • Novella: Mary Fran and Matthew • 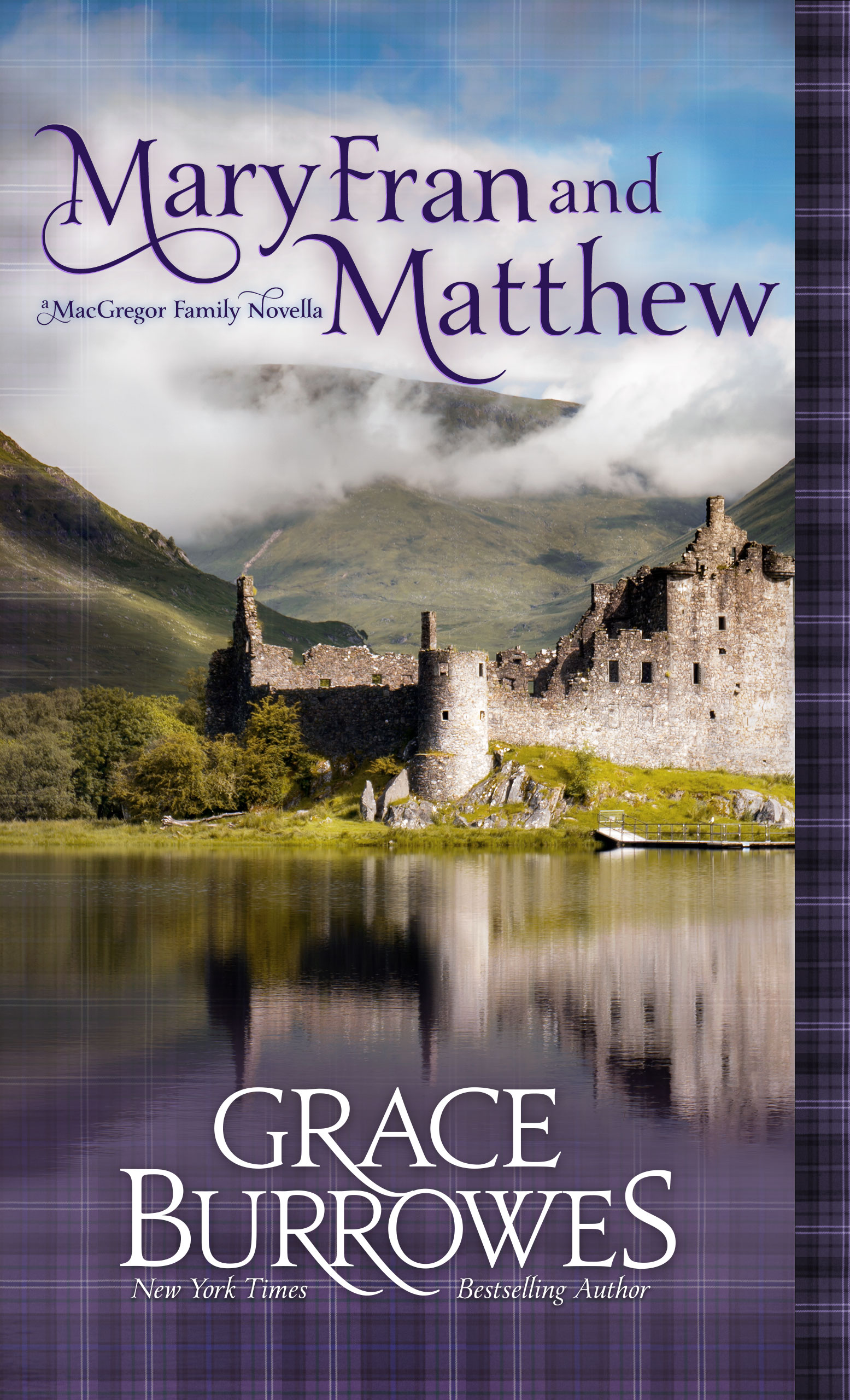