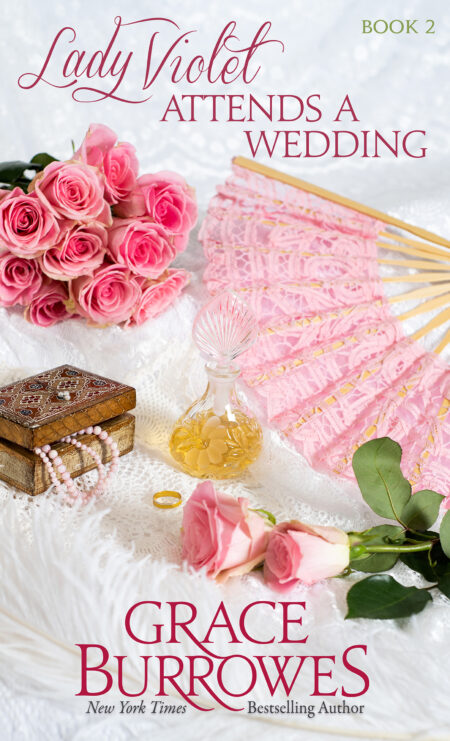 Lady Violet Belmaine is just finding her balance as a widow who has recently put off mourning when she’s summoned to the family seat to celebrate a sibling’s wedding. Hugh St. Sevier’s escort makes the journey somewhat bearable, while Sebastian MacHeath‘s presence among the guests is a more dubious blessing.

Violet is managing as best she can with her stubborn Papa, difficult brothers, and well meaning aunties, when the bride goes missing. Tempers flare, old secrets come out at the worst times, and Violet can rely on only St. Sevier and Sebastian to help her find the bride… until she discovers that St. Sevier was the last person seen with the missing lady!

The best way to get to know a man is not to share a bed with him, but rather, to share a coach with him in the middle of a deluge on what is euphemistically referred to as the king’s highway. This experience befell me en route to my brother Felix’s wedding. My escort on the journey was Monsieur Hugh St. Sevier, a skilled physician and the most cordial of men under normal circumstances.

He sat across from me, his Gallic charm having been jettisoned within an hour of leaving London.

“My lady, in all the vast reaches of the great, untamed wilds of the English language, I could not find profanity sufficiently vile or voluminous to describe my contempt for His Majesty’s roads.”

St. Sevier, though heir to a French title, had spent many years in England. His accent thickened as his normally gracious manner eroded. At present, that accent was the consistency of the mud miring the wheels of my traveling coach.

“My contempt is reserved for the English weather,” I replied, tightening my grip on the leather strap dangling from the ceiling. “I have never seen rain like this.”

We’d left London amid a mere downpour, but as the day had advanced, the downpour had intensified, at times creating such a thunderous roar on the coach roof as to render conversation impossible. We had changed teams frequently, for the going was bad enough to tire the stoutest of equines.

“We should find an inn,” St. Sevier said. “We must find an inn before one of the horses is lamed by this mud and we are stranded by the side of the road.”

He’d assayed that opinion previously, though every other traveler was likely of the same mind. The inns would offer nothing but a stinking, clammy trial to the nerves in a crowded common, even for me, an earl’s daughter and a widow of means.

I dealt with crowds even less graciously than St. Sevier was dealing with the weather.

“We must press on,” I said, trying for a cajoling tone. “We are less than ten miles from Derwent Hall and my family is expecting us. If I fail to arrive as scheduled, they will fret, and when my family frets, the peace of the realm is at risk.”

I was the youngest of five siblings, which was all well and good, but the other four offspring of the Earl of Derwent were male, each one louder and more opinionated than the one before. Felix, the youngest of the brothers, was only the second to marry. My oldest brother Mitchell, Viscount Ellersby, had been married for more than five years.

Mitchell had yet to sire a son, and Papa was agitating for more grandchildren, of course. Until his sons presented him with grandsons—note the plural—he would not consider the earldom’s succession earldom secure.

The coach lurched and St. Sevier began cursing in a river of low, inventive French.

“Violet, my esteem for you is without limit, but this journey has become a nightmare. We must stop at the next opportunity.”

The carriage righted itself and I breathed a sigh of relief. I loved my traveling coach, from the heavily padded benches to the clever compartments designed to hold food and drink. The lamps were exquisite, the leather sumptuous. The floor held a compartment for heated bricks, and the lap robes were soft merino wool dyed to match the chocolatey leather.

I had good memories of traveling in this coach with my late husband. Good, married memories, for the two benches cleverly folded out to create what amounted to a mattress. Freddie had believed in getting comfortable before we’d passed the first tollgate out of London, though even he would have been hard pressed to manage connubial joy amid the jouncing I endured with St. Sevier.

“We will be on Derwent land soon,” I said. “When the terrain is less hilly, the road will improve.”

St. Sevier had tended the wounded on battlefields all over the Continent, and I’d seen him face down society gossips with only an elegantly raised eyebrow to counter their broadsides. He was an attractive man, chestnut-haired, brown-eyed, suave, and soft-spoken.

Sitting across from me in the coach, he looked as if he’d been dragged through a hedge backward by drunken demons under a witch’s moon.

“You English,” he said, in tones that were less than respectful of his host country. “You cannot build a road to save yourself. The Romans, using donkeys and commonsense, built roads that yet endure. You are still using the roads they left you nearly fifteen hundred years ago. But depart from the Roman roads and your country is reduced to traveling cart tracks that no civilized—Dieu nous préserve!”

This time, the coach did not immediately right itself, but sat at an awkward angle, the back end of the vehicle slanting downward most alarmingly. Shouting and whinnying sounded above the pounding of the rain. A whip cracked, and the coach heaved back upright. 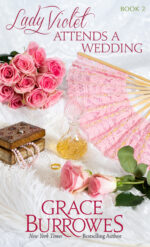 “Violet, we are being foolish,” St. Sevier said. “I did not survive years at war to lose my life in some English ditch.”

“Hugh, I know you can swim.” As could I, thanks to an inadequately supervised country upbringing, but what good would those skills do us if our coach were to fall into any of the rivers rising so quickly beneath the many venerable bridges we had to traverse?

“We stop at the next inn, Violet,” Hugh said, his expression grim. “As the escort whom you requested to accompany you on this journey, I am making that decision and you will not argue with me.”

“I have long suspected that steel lies beneath your fine manners and bon mots.”

“Not steel, my lady, a fervent wish to live to see the dawn.”

We said nothing for the next several miles, and I began to hope that I’d reach Derwent Hall in one somewhat bruised and bedraggled piece. My coachman was a tough old Scot who also apparently sought to live to see the dawn, for he took no risks, letting the horses slog along as best they could without foolish displays of speed even when the going was somewhat better.

“We’ll be there soon,” I said, as we clattered out of the village that served my father’s estate. The gaggle of buildings arranged around a now-sodden green had fascinated to me as a child. I’d watched the smith at his forge and fancied him Vulcan in Hades. The apothecary and lending library had been full of adult women speaking in half-humorous code about odd ailments and troubled marriages.            What would they have said about my union with Freddie Belmaine?

“You truly did grow up in the country, didn’t you?” St. Sevier asked, peering at the damp green world beyond the windows.

“I miss it.” I’d reached that conclusion some weeks earlier, at a house party I hadn’t particularly wanted to attend. I’d found myself stealing away with a book to this or that quiet meadow or pretty garden path. “I’ve been thinking of leaving London.”

Hugh left off scowling at the wet countryside. “Leaving London for where?”

I considered him a friend, and strongly suspected he was willing to be more than a friend. “Would you miss me?”

“I’d visit you, assuming I was welcome, and assuming all of England does not wash into the ocean in the next twenty-four hours.”

I’d visit you. He did not specify in what capacity, and I did not press the matter. As a physician, Hugh had advised me to get out of London for the duration of that house party, and his guidance had been sound. I’d come home a stronger, less anxious person.

Had I come back happier?

“I’m not sure where I’d go,” I said, “but I miss fresh air and true quiet. London is never quiet.” Not did London ever smell even faintly alluring.

My emotions put me in mind of the stream running beside the road. I’d built my share of dams in that stream. The rains had swollen a placid little burn into a raging torrent surging well past its banks. The current sluicing by the coach was swift and roiling, with branches and debris bobbing wildly on muddy depths.

That peaceful little country burn was dangerous now, and the restlessness I’d brought back to London with me felt equally untrustworthy.

“Not so long ago,” Hugh said, cocking his head, “you were reluctant to leave your house or put off your weeds. Now you propose to flee London altogether?”

“I’m not sure what I propose.” The coach turned right, toward the Derwent Hall main gates open at the far end of a wide wooden bridge. No gatekeeper came out to welcome us, though I spied a dim light in the window of the gatehouse through the downpour.

“Your brother’s wedding will bring back difficult memories,” Hugh said. “I’m sorry for that.”

“Why must you be so perceptive?” I’d been a happy bride, also an ignorant one.

Hugh and I shared a smile, one of many that made me feel as if I could tell him anything, and he’d receive my confidences in a spirit of compassion and shared humanity. I liked Hugh so very much, and he was forthright about letting me know that he—

Several things happened in the same instant. A crack of thunder sounded as if God had dropped his very fist on the roof of our coach. Horses whinnied and iron-shod hooves thumped and scrabbled on the wet planks of the bridge. The coach lurched crazily, and a sharp snap accompanied an abrupt slide toward the water raging beneath the bridge.

St. Sevier dove across the coach to grab for me as the door flew open, then I was falling, with nothing to hold onto.

Lady Violet Attends a Wedding — Book Two is available in the following formats: 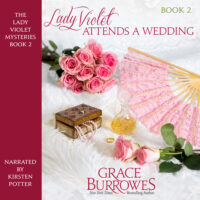 Lady Violet Attends a Wedding — Book Two is Book 2 in the Lady Violet Mysteries series. The full series reading order is as follows: