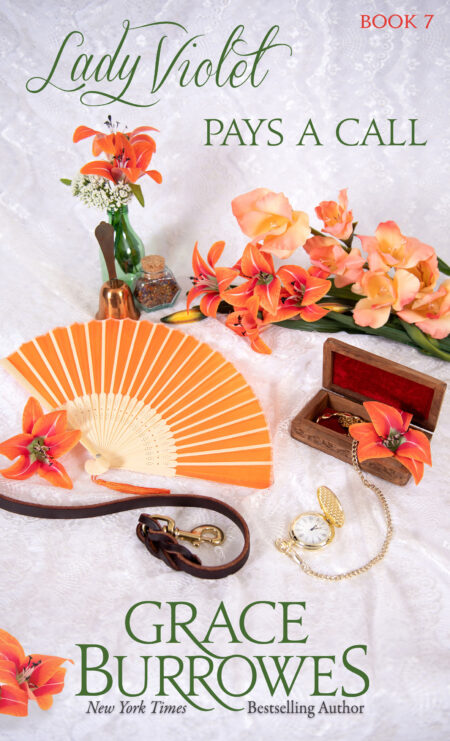 While Lady Violet Belmaine is busy sorting out the odd turns her life has recently taken, Hugh St. Sevier repairs to his Kent estate in hopes of embarking on the placid life of a rural physician. Alas, for St. Sevier, the village of St. Ivo has more secrets than it has pots of heartease, and the good doctor will once again find himself the target of rumors and threats.

Somebody is rigging St. Ivo’s hound races, setting neighbor against neighbor, and turning what should be a friendly entertainment into an occasion for brawling. As an expert on medicinal herbs and soporifics, St. Sevier comes under suspicion. St. Ivo badly needs a physician, and the village also needs somebody to unravel the intrigues that are tearing it apart. St. Sevier can’t get to the bottom of the mystery on his own, but help–in the persons of Lady Violet and Sebastian MacHeath, is on the way!

A gentleman who asks the woman he loves to marry him should be devastated when circumstances prevent the lady from speaking her vows. Circumstances, in the person of a wife I thought long dead, showed up at precisely the moment when Lady Violet Belmaine had agreed to become Madame Hugh St. Sevier.

Le Bon Dieu has a unique sense of humor, non? And in my humble person, the Almighty has been provided with endless entertainment. Nonetheless, divine providence has also smiled upon me in my blackest hours. A gentleman does not complain.

My wife Ann and I had been the victims of complementary vagaries of war. She had deserted me as I served as a medical volunteer during Wellington’s campaign on the Iberian Peninsula. Ours had been an expedient match. Ann’s first husband—a young Scotsman—died in battle. She was not on the official rolls as an officer’s wife, and thus she was stranded in a foreign land, her options limited to holy matrimony with my humble self or prostitution with half the regiment.

Ann is pragmatic by nature.

She watched me practice battlefield medicine for less than year. She then took her chances with a band of deserters heading for the coast in hopes of finding passage home. I was told her party had come to a bad end at the hands of a French patrol—no survivors.

That erroneous information was spread by English officers in an effort to stem the never-ending tide of disloyal soldiers. Ann, a few months later, read of my supposed death on the casualty rolls, and thus our paths diverged. Chance alone had me traveling to Perth, Scotland, in the company of Lady Violet Belmaine, my former intended. On the streets of Perth, not a year past, Ann had caught site of me and I had caught sight of her.

Those chance sightings might have been the end of matters—many an ill-suited couple has parted ways to start afresh—except that Ann and I had been married long enough and passionately enough that, unbeknownst to me, a child had resulted.

Do not judge us, not unless you have been young, lonely, and far from home in wartime.

Fiona has her mother’s flaming red hair, my brown eyes, and a spirit that delights me every time I behold my daughter.

Fiona’s mother has a temper, a complicated code of honor, and an unwavering devotion to our child. I admire all three attributes, most of the time. Ann confronted me with the fact of her existence—and Fiona’s—as much to prevent Lady Violet from undertaking a bigamous union as to ensure Fiona enjoyed my support and protection.

What I wanted was of no particular moment to Ann, nor should it have been. Were she to ask me about my wishes, I’m not sure I could fashion a coherent reply in French or English, even now.

In her defense, Ann had no notion at the time she interrupted my wedding plans that Violet already carried my child. If all goes well, her ladyship should become a mother in less than six months’ time. If all goes perfectly, she will become a Scotsman’s marchioness before that happy occasion.

What a muddle, as the English would say. The French have more colorful terms to which a gentleman does not resort in polite company.

Being a gentleman, the only course open to me was to set aside my ambitions where Lady Violet was concerned, or to allow her to graciously set me aside. I turned my energies to being Fiona’s papa and Ann’s….

I believe the English term is housemate.

We dwell at Belle Terre in rural Kent, a property I inherited. I had been considering selling Belle Terre, but when Ann and I needed a place to sort ourselves out, I reasoned that an estate to which I was not attached, one where I had little loyalty from the staff, was the better choice.

We have been here nearly three months. We are settling in. Protracted silences are relieved by short conversations relating mostly to Fiona’s activities.

I am not to buy our daughter a pony for at least two years.

I am to speak French to her in the forenoon. I may speak English to her thereafter.

I am to read to her at bedtime, though Fiona is old enough to grasp simple texts herself in English, French, and Gaelic. 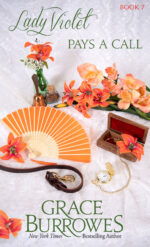 Thus do the lord and lady of the manor settle in at Belle Terre.

I am permitted to ride out, and because the acreage associated with the property is considerable, I use my time in the saddle to acquaint myself with the land and tenants. The work is uphill work there—there, too—owing in some part to my lamentable Frenchness.

I grow heartily sick of speaking to my tenants in slow, loud words of few syllables, but the average Kentish farmer is apparently prone to poor hearing.

My horse’s hearing is excellent, and when Charlemagne pricked his ears and stared intently at the path leading up to the manor house, I came alert as well. I was alone in the stable, the lads having gone for their nooning. I was happy to busy myself with removing saddle and bridle after a morning of loudly admiring Mrs. Deever’s new baby—despite the infant’s slight case of convergent strabismus—and loudly hoping Mr. Deever’s harvest was as impressive as he predicted.

The steps on the path were soft and quick, also light—not a grown man. I had time to both hope and dread that my wife sought me out before Fiona scampered into view.

Ann never summoned me, and I never summoned her. Vite! Vite! was both encouraging and mildly alarming. “I must first put Charlemagne away, child, then I will come.”

“Put him away quickly, Papa. Mr. Grant has need of you. He came to the kitchen to fetch Mrs. Trebish and she came to fetch Mama in the sewing room and Mama sent me to fetch you.”

Mrs. Trebish, our new housekeeper, had taken her post with fear and trembling at the prospect of working in the home of a murdering Frenchie. Only Ann’s repeated reassurances that the owner of the household was also a physician who had served under Wellington induced Mrs. T to grace us with her presence.

She was civil to me, but much preferred to deal with Ann, whose Scottish origins were also less than ideal in Mrs. T’s eyes, but by no means as dubious as my own.

“You should tell Jules to put Charlemagne away, Papa.”

“Jules is taking his luncheon.”

When excited, Fiona mixed up her languages. When absolutely beside herself, which I had observed on only one occasion, she lapsed in her mother’s native Gaelic. Charlemagne looked as if he too was about to start babbling in several languages, so great was his dismay at Fiona’s agitation.

“Jules is in the servant’s hall, Fiona. He cannot hear you.”

“Then I will fetch him!” She dashed off, leaving me to remove Charlemagne’s saddle and lead him to his loose box. I did not put away the saddle or bridle, did not give the horse the grooming he deserved. The beast seemed happy enough to be reunited with the pile of hay waiting for him in the corner of his stall and I had cooled him out properly.

I adopted as rapid as pace as dignity would allow when I made my way to the house. My wife had sent for me, albeit at the behest of a neighbor. Considering that Ann generally had no use whatsoever for her husband, I was pleased to heed her summons.

Lady Violet Pays a Call — Book Seven is available in the following formats:

Lady Violet Pays a Call — Book Seven is Book 7 in the Lady Violet Mysteries series. The full series reading order is as follows: