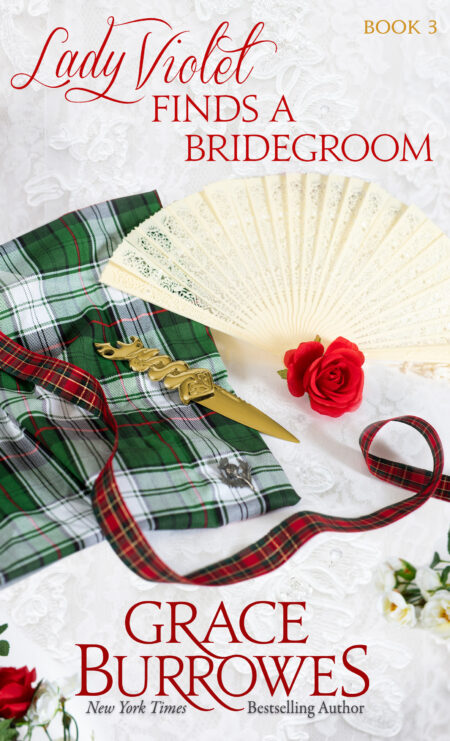 Why must a widow newly emerged from mourning be invited to every wedding in the realm? Lady Violet Belmaine ponders that conundrum while traveling from London to rural Scotland at the invitation of an old friend. Escorted by her dashing physician friend, Hugh St. Sevier, Violet prepares to again subject herself to a nuptial celebration, except… the groom fails to appear.

Matters become more interesting when Violet discovers that Sebastian MacHeath is laird of the nearest castle, and well acquainted with the bride and her family. Mysterious cousins, surly neighbors, and appearances much at variance with the facts all confound Violet’s efforts to find the missing groom, and any designs she might have on her handsome escort!

The time had come for me to have my way with Monsieur Hugh St. Sevier.

The gentleman was willing, of that I had only a scintilla of doubt. I was even more convinced that St. Sevier was a gentleman, and that he would make an excellent partner for my first venture into the privileges and freedoms a discreet widow was entitled to.

I reached these conclusions as St. Sevier once again served as my escort, this time on a journey that took us the length of England and into central Scotland. St. Sevier professed a desire to see more of his adopted country, and though many widows traveled without male escort, I did not yet feel sufficiently independent to undertake that challenge.

My decision to dip a naked toe into the waters of dalliance had come over me slowly, in the course of a long winter spent in London. Entertainments in the coldest months are few in the capital, particularly because Parliament, since Waterloo, had not been opening until well after the Yuletide holidays.

In the previous year, I had been all but dragooned into attending a summer house party and then an autumn gathering at my family seat, on the occasion of my brother Felix’s wedding. St. Sevier had accompanied me on those journeys, and been a party to the adventures I’d encountered. The house party had been victimized by a series of thefts. Felix’s bride had been abducted prior to the nuptials.

Both puzzles had been solved to my satisfaction, and those excursions had shaken me free of a lingering malaise. After observing two years of mourning for my late husband, I had grown so familiar with that habit of solitude that venturing forth had become a thing to be dreaded. St. Sevier, a physician, had coaxed me into leaving Town, and the changes had done me good.

As I’d partaken of fresh country air, good books, and the occasional horseback ride, I’d shaken off the torpor of grief—a bad marriage is harder to grieve than a good one, in my opinion—and taken stock of my life.

The inventory consisted of a smothering portion of boredom, duty, routine, and loneliness. That last item had been difficult to identify, in part because I had so long claimed ownership of it—or it had claimed ownership of me. As the only girl and youngest of five children, I had been isolated by my gender and my age. My mother had died when I was yet a child, and that further nudged me to the edges of the family circle.

I became engaged at the age of seventeen to Frederick Belmaine, a handsome, wealthy, bon vivant who had appeared to be my every girlish fantasy come true—by the time my father had finished singing Freddie’s praises.

Papa had a talent for embroidering heavily on the truth. After the wedding breakfast, Freddie had offered me a chaste kiss on the cheek, and nipped off to bid farewell to his friends at the club.

He had, in fact, popped around to his mistress’s, there to enlist her sympathy for the tribulations he would endure on his wedding journey. Freddie was not intentionally cruel, which only made marriage to him all the more bewildering and painful for a girl raised without meaningful female guidance.

Freddie had died five years speaking the vows he’d broken the day he’d uttered them, the cause of death food poisoning, as far as anybody would tell me. He had expired at his favorite brothel, in the arms of a woman whom I subsequently came to know and even like.

He was a better husband in death than he had been in life. I was quite well fixed, and had no need to remarry. I was also more somewhat worldly than many young widows, for Freddie had delighted in educating me out of my sheltered upbringing. Had I provided him with children, he would doubtless have encouraged me to pursue any number of liaisons with his indulgent blessing.

Thoughts of my marriage could still provoke me to anger, but not to the grinding rage I’d felt in the early years of wifehood. I reconciled myself to the hope that in time Freddie would have put away his extra-marital pleasures, and I would have forgiven him his errant ways.

With my grand theory of dalliance firmly in hand, I packed up my trunks, endured the grumbling of my maid, Lucy, and climbed into my traveling coach. I sent Lucy ahead with my luggage and a handsome young footman named Jones, while I took for myself the pleasure of St. Sevier’s company.

That he did not kill me before we’d reached Peterborough was a testament to his great patience and reserves of chivalry. That I did not kill him was entirely a result of the failure of an Englishwoman’s education to teach her the effective use of violence.

Lady Violet Finds a Bridegroom — Book Three is available in the following formats: 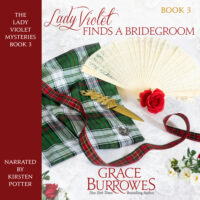 Lady Violet Finds a Bridegroom — Book Three is Book 3 in the Lady Violet Mysteries series. The full series reading order is as follows: