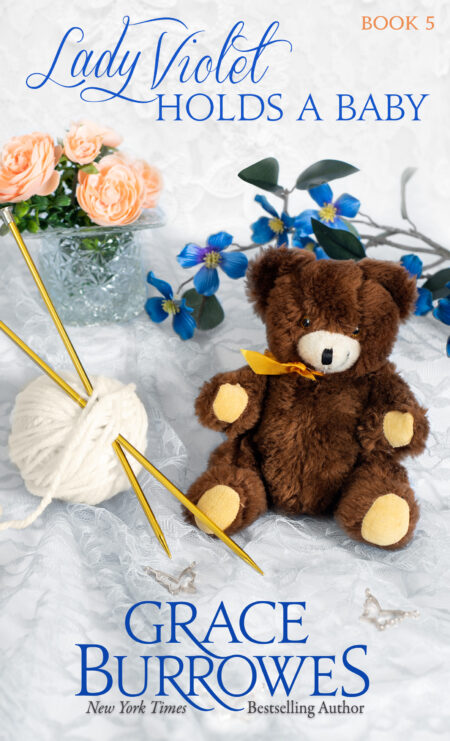 If it’s not weddings, then hapless widows are expected to attending christenings… Lady Violet returns with St. Sevier to her family seat, and finds Derwent Hall at sixes and sevens upon the occasion of her nephew’s christening. Other guests have brought their children along to celebrate the occasion, and Sebastian MacHeath is on hand to serve as godfather.

Nobody seems to be getting along, despite the happy nature of the gathering. Summer heat builds to an unbearable crescendo as clandestine affairs, marital troubles, and family tensions escalate. Then somebody starts stealing little girls, and Lady Violet must figure out who, why, and how the kidnapper can be foiled.

A handsome, passionate, inventive Frenchman was subtly inviting me to sample his charms.

My traveling companion affected gentlemanly surprise. “You give me the look a farm wife aims at the father of her eleven children, when I merely suggest we fold out the benches for greater comfort. What is amiss with my darling Violet?”

“I don’t feel very darling.” The traveling coach rocked along, while I puzzled over my own understatement. My late husband would have called my mood shrewish, but then, shrewish was one of many pejoratives for which no exact male counterpart had been invented—yet.

In my present mood, I felt up to the challenge of remedying that oversight.

“You face the prospect of another family gathering,” St. Sevier said, settling an arm around my shoulders. “This challenge would daunt Napoleon’s bravest cuirassiers. I confess I myself would not venture into the company of the Deerfields without your stalwart escort.”

My Deerfield family consisted of my four older brothers, two of whom were married, and my father, the Earl of Derwent. I could also claim some aunties and cousins, as well as a pair of nieces and one infant nephew.

That I knew of. Given my father’s propensity for rascally behavior, I might have legions of half-siblings about whom I was ignorant. Papa dismissed his roguish deportment as reminiscent of an earlier era, and I had no reason to believe he’d changed with the times.

Why my thoughts should wander to my father’s flirtations I did not know.

“Shall I read to you?” St. Sevier asked. “You can explain Byron to me.”

“No Byron, thank you.” His lordship’s verse was exquisitely witty, also savagely bitter. Having not yet reached my thirtieth year, and enjoying great good health as well as the company of a dear man, I was not entitled to bitterness.

Nonetheless, my mood had that acrid, seething quality often associated with bitterness. My appetite had grown indifferent in recent days, and I had neither energy for much activity nor the ability to sleep well.

“St. Sevier, how does one know if a bout of melancholia is descending?”

Hugh’s embrace became subtly protective. He was a skilled physician who’d also done service as a battlefield surgeon. I had first made his acquaintance when the time had come for me to emerge from mourning, and I’d found myself barely able to emerge from my own house.

For two years that dwelling had been more a prison than a refuge. Nonetheless, when I’d finally completed my second year of mourning, I became inexplicably fearful of venturing out eveb to attend divine services.

Hugh had suggested I start by reading at a window, if that was all I could manage. From there, I graduated to taking tea with him on the terrace, and then we’d strolled the garden while he asked me about my symptoms.

The stroll in the garden had become an escort to church or a carriage ride in the park, and then the blighter had coaxed me into attending some of the less glittering social occasions to which an earl’s widowed daughter was invariably invited.

Hugh St. Sevier was tenacious, wily, relentless, and kind. In the year since I’d resumed a life beyond mourning, he and I had shared several adventures, and grown close enough that he had asked me to become his wife.

I was tempted. Hugh was everything estimable in a man, as my husband had not been. Hugh was also affectionate, and I needed that almost more than I’d needed those walks in the garden. My late husband, Freddie Belmaine, had been cut from the same self-indulgent cloth as my father, but he’d been an attentive husband. He’d offered me his arm when he escorted me. He’d parted from me with a peck on my cheek, and showed me reasonable consideration in bed.

I did not miss Freddie, but he had died much too young.

“One does not always know that a bout of melancholia is descending, in the usual course,” St. Sevier said. “It’s unlike a sick headache, where narrowed vision, distorted hearing, or a sensitivity to light will presage the onset of pain. Melancholia is diabolical. It can announce its approach with excessive good spirits, with fatigue, with unexplained tears, with no signs at all. Could you not simply be in the grip of a slight case of dread, Violet?” 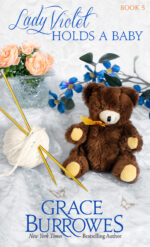 Of all the many qualities I loved about Hugh—his humor, his compassion, his integrity—his willingness to simply talk to me was near the top of the list. Then too, he was a fine-looking man, at slightly over six feet, with chestnut hair and brown eyes that could shine with humor, ire, or understanding.

“I don’t dread my family.” Did I dread this gathering?

“You regard them with wary affection. I came to feel something similar for my late wife. I cared for her, I wanted her to be happy, but I suspected that sometimes, her happiness and mine had an inverse relationship.”

For a man whose native tongue was French, St. Sevier could wield English with impressive delicacy. “She enjoyed making you miserable?”

“We were young, and a jealous husband is a husband showing some regard for his wife. Annie and I married as a result of wartime expedience, and I had hoped we would grow to be friends. I was not the jealous sort, though—I was too tired to be jealous—and this vexed her exceedingly.”

St. Sevier did not often speak of his past, which was understandable. As a French émigré who had volunteered to provide medical services to Wellington’s army, that past was full of sorrows and regrets.

His brothers had served under Napoleon, and not a one of them had survived the wars.

“Did you dread your wife’s company?” I asked, rather than return to the dreary topic of melancholia.

“I would go through my day, longing to return the tent or billet I shared with her. I would grow famished for the domesticity of a meal taken with her rather than with the officers or men. I wove fancies about trading camp gossip, for the men and the women in a military camp gossip differently, and yet, as the sun set, and the time came to rejoin her… I would dither.”

“Because,” I said, “you argued when you should have chatted. The meals were taken in silence, and nothing you did was ever good enough for your spouse. I was relieved when Freddie died.”

After five years of marriage, we’d reached a truce that had grown colder with each passing season. Freddie had his numerous frolics, and I had my anger at him for enjoying the pleasures any man of means expected to indulge in. Seventeen-year-old brides are ripe for disillusionment.

Spoiled husbands bring that out in them.

“Annie hated army life,” Hugh said. “Then she was widowed, then she married me rather than become a regimental commodity. I was not relieved when she abandoned me to make her way back to Scotland alone, but neither was I surprised.”

“And when she did not make it home?” She’d been killed in an ambush, though details were vague. A French patrol? Spanish sympathizers? Deserters? Brigands? Spain had been a cauldron of violence and conflicting loyalties for the duration of Wellington’s campaign.

“I was sad, Violet, but to make war is to make sadness, and the sadness in its way can be more deadly than the bullets. Let us turn out conversation to happier topics. Will Lord Dunkeld be on hand when we arrive at Derwent Hall?”

Sebastian MacHeath, Marquess of Dunkeld, was to be godfather to my new nephew. Sebastian had fought in Spain with my youngest brother Felix, and spent many summers and school holidays racketing around rural Surrey with my siblings.

And with me. War was a less cheery topic than the present incarnation of Sebastian MacHeath, but only just. As a youth, he’d been my dearest friend—my only friend—and his decision to buy his colors had vexed me sorely.

That decision had also vexed his titled uncle, the previous Marquess of Dunkeld, and at the time I’d thought twitting the old marquess had been Sebastian’s sole motivation.

“Lord Dunkeld was making the rounds in London,” I said, “hunting a marchioness, no doubt. I’ve told him he ought to find himself a stalwart Scottish lass to fulfill that office, but he says they know better than to marry a man with a castle.”

“Impossible to heat, expensive to maintain.” Hugh kissed my temple, the exact sort of casual gesture I usually found so endearing from him. “Tell me of the rest of the gathering. Extended family? Neighbors, in-laws? I want the whole list, and please tell me your lady cousins have declined to attend.”

My lady cousins had made St. Sevier’s acquaintance on the occasion of Felix’s wedding. To say they’d been smitten was an understatement. More accurate to label their reaction to Hugh as stricken. Stricken with a dire case of hen-witted infatuation.

I had not been infatuated with Hugh, but I had been attracted to him. He had been wise enough to allow that interest to ripen into a deeper regard, one kiss, one embrace, one passionate night at a time.

“I’m not sure who all is expected,” I said, “but as godmother, I could not fail to be on hand. The house will doubtless be mobbed, because this is the earldom’s next heir whose arrival we’re celebrating.”

I was overjoyed for Felix and Katie, who were besotted, and not at all high in the in-step. They would be loving parents to the boy, and prevent my father from meddling overmuch in his grandson’s upbringing.

“Is that what has you in such a brown study, Violet? Does the child cause you heartache?” Hugh asked, brushing his fingers along my cheek.

I closed my eyes, loving the feel of his touch. “Hmm?”

“Never mind,” he said. Even with my eyes closed, I could sense the shift in the light that occurred when Hugh drew the coach’s shades down. “Have a nap, and by the time you waken, we will be tooling up your father’s drive.”

Hugh had, in his gentle, oblique way, pointed me in the direction of a painful insight. Freddie had had his lightskirts, his commerce, his clubs, and his wagers. He’d had a by-blow or two, while I had had a household to manage and a husband who’d occasionally visited my bed.

And yet, after five years of marriage and two disappointments, to use the hideously genteel term, my nursery had still been empty.

Lady Violet Holds a Baby — Book Five is available in the following formats: 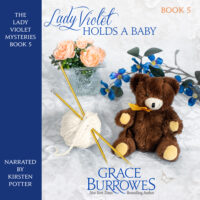 Lady Violet Holds a Baby — Book Five is Book 5 in the Lady Violet Mysteries series. The full series reading order is as follows: